Freo welcomes the boys Next Door

A couple of veterans of the Fremantle strip have brought something a little different to the iconic precinct. 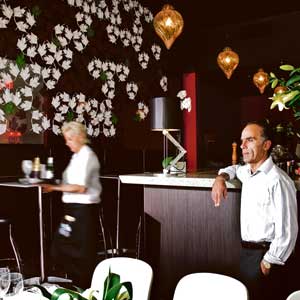 BACK IN TOWN: Nick Spano at Next Door, the newest addition to Freo’s famous strip. Photo: Grant Currall

IT was by chance that two of Fremantle's cappuccino strip stalwarts met in Cairns and came up with the idea for a chic new tapas-style bar in the port city.

For former Old Papa's manager Nick Spano, the idea proposed by long-time friend and Gino's Group managing director Paul Saccone is what brought him back to the state after nine years in Queensland.

The result is Next Door (formerly Marconi's), a restaurant-wine bar with an emphasis on the sharing of tasting plates, and boasting an extensive and affordable wine and cocktail list.

"Paul said we should open up a restaurant. I was in Cairns and he came there for a holiday and he asked me if I ever wanted to come back to Fremantle," Mr Spano told Gusto.

"I said I planned to, one day, and he asked if we could do something together if he found a restaurant.

"I said, 'yes, it's likely, let me know when it happens because I'm not going to say yes until it happens'. And it happened."

The pair bought Marconi's and refurbished the cafe, styling it in the manner of a quality Melbourne venue, but with a touch of European glamour.

Its décor exudes elegance, but the menu and the wine and cocktail list are affordable.

"I think Fremantle has lost its soul, from what I gathered when I came back, and that's because there's nothing to attract people back here," Mr Spano says.

"I came back to Fremantle because I always wanted to have a restaurant along this strip; because for most of my childhood, say from 17 years of age, while most of my friends went out, I spent it in hospitality working in Old Papa's, running that at the age of 22.

"I think Fremantle has gone backwards - what people have to offer, what the hospitality industry has to offer.

"For instance, all you can eat in Fremantle apart from Indian restaurants, Thai and all that, is pasta and pizza.

"So that's why we've decided to do something different. People don't want pasta and pizza every day, so we're doing a style similar to tapas. We really want to capture that market."

Mr Spano was 17 when he started work at Papa Luigi's (now Merchant Tea and Coffee House) on South Terrace, running the cafe when it became Old Papa's while the owners built the New Papa's down the street.

For Mr Saccone, the cappuccino strip has been his life ever since his late father founded Gino's cafe about 40 years ago.

Mr Saccone says Fremantle needs a new direction in hospitality and hopes Next Door will be the next big thing in Fremantle.

"It's just different. The food is light with an emphasis on local and Australian produce; the dishes have been designed to share," he told Gusto.

"You can taste quite a few things in one sitting. Plus there is a great casual feel to the place and the service is attentive but not imposing."

Mr Spano believes the dining culture in Fremantle has shifted and that more tapas-style restaurants will emerge, much like has happened in Melbourne.

However, he believes Fremantle is unique in that it has a community feel not found in many other locations.

"And that helped us with naming the place," Mr Spano says. "Everybody knew me and everybody knew Paul. So in the beginning, in the old days, all they used to say was 'which [cafe] are you guys from? And we would be sitting at Gino's, and I'd say, 'from next door'.