The business dealings of China’s political elite and their offspring are shrouded in secrecy, but there’s no doubt about how lucrative those deals have been for the chosen few. 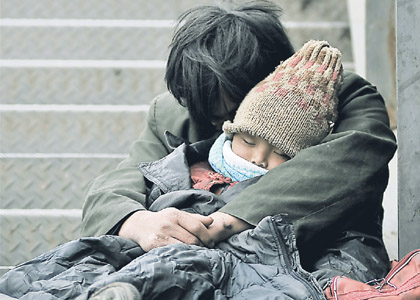 MANY WITH LITTLE: The post-Mao Communists have ruthlessly sidelined the vast majority of the Chinese people. Photo: iStockphoto

The business dealings of China’s political elite and their offspring are shrouded in secrecy, but there’s no doubt about how lucrative those deals have been for the chosen few.

Their purging of Maoist communistic economic practices, but tragically, not homage to Mao, proved to be so successful that, 35 years on, 600 million people have lifted themselves out of poverty.

According to a report from China’s official Xinhua news agency in November 2012, China’s “economy in 2020 will be close to that of the United States in 2012”.

Firstly, not told is who has bene-fitted undeservedly from the nearly four decades post-Mao.

Not fully appreciated by Western Australian business leaders is the fact that, in a population of 1.2 billion, only a tiny handful of exceptionally well-connected individuals gained from Deng’s dumping of Maoism.

Who are these privileged few?

To answer this it’s important to know that, as well as Deng, Li and Chen, there were five other key players - Peng Zhen, Yang Shangkun, Bo Yibo, Wang Zhen, and Song Renquiong - who are collectively known as the Eight Immortals, a term from Chinese mythology.

Although all are now deceased, their offspring and relatives form China’s new monied aristocracy.

These and offspring of several Communist veterans have, like Russia’s super wealthy oligarchs, amassed huge fortunes, so are known as ‘princelings’.

Like other aristocracies, offspring of the Eight Immortals’ have intermarried, share investments, and have devised highly remunerative insider corporatist financial arrangements.

Bloomberg News’ investigation of this aristocracy and its amassed wealth says: “The identities and business dealings of these families are often cloaked in secrecy because of state censorship and complex corporate webs.”

He says the rise of the princelings shows Deng’s 1978 intentions have been thwarted.

The princelings have embraced money and political power in a megalomaniacal manner, so China’s ruling elites have swung from promoting Mao’s hare-brained pauperising policies to rapacious greedy ones favouring the few at the top.

In both eras, the common people have been ruthlessly sidelined.

“Deng’s plan, and that of China’s other Immortals, was to cement the Communist Party’s rule by boosting living standards,” Pesek writes.

“What the Immortals hadn’t counted on was how their children would foul things up.

“By harnessing the trust of the state and top-level political connections, these princelings are reaping outsized benefits from China’s growth.

“It is an outcome that would shock Deng: After 30 years of explosive growth, opening markets and reducing poverty, inequality levels now echo the pre-Communist era.

“One of modern history’s greatest wealth grabs isn’t just exacerbating the rich-poor divide, but delaying the reforms needed to roll back the state control that masks underlying economic inefficiency.

“There is lots of money in the status quo - an unfathomable amount, in fact.

“Just three of the Immortals’ dozens of children and their spouses -among them Deng’s son-in-law and the son of Mao’s economic czar - founded or run companies with combined assets of $1.6 trillion as of last year.

“That’s equivalent to almost a fifth of China’s GDP.

“More than a third of the Immortals’ children and their spouses hold top positions in state-owned enterprises.”

Is he a princeling?

Well, his father Xi Zhongxun was a veteran guerrilla who saved Mao by giving him sanctuary in northern China after Mao’s highly mythologised Long March of 1934-35.

Then, in 1979, he pressed for the creation of the Shenzhen Special Economic Zone, adjacent Hong Kong and now one of China’s largest cities.

So, an insider with total political control is now at the very top.

That’s why, since gaining selection to become number one in November, he’s stressed that corruption remains so endemic it is threatening both party and motherland.

“They [The Immortals] entrusted some of the key assets of the state to their children, many of whom became wealthy,” Bloomberg continued.

“This is fuelling public anger over unequal accumulation of wealth, unfair access to opportunity and exploitation of privilege - all at odds with the original aims of the communist revolution.

“In the 1980s, they were chosen to run the new state conglomerates.

“In the 1990s, they tapped into real estate and the nation’s growing hunger for coal and steel.

“Today the Immortals’ grandchildren are players in private equity amid China’s integration into the global economy.”

University of California professor Barry Naughton says: “The Chinese Communist Party, pretty much led by these eight people, established their legitimacy as rulers of China because they were stronger and tougher than the other guys.

“And now they’re losing it, because they haven’t been able to control their own greed and selfishness.”

Chicago University politics professor Yang Dali, author of a major study of China’s crony capitalism, ‘Remaking the Chinese Leviathan: Market Transition and the Politics of Governance in China’, said: “The entire country was in business - the party, the military, the courts, the prosecutor’s office, the police.

“Insiders could get rich very quickly.”

If this corporatist marriage between business and politics were kosher, most Chinese would be fully at ease.

London’s Daily Telegraph (‘China’s multi-millionaires emigrating in droves’, December 12 2012) reported that a Chinese Academy of Social Sciences monograph had “suggested Chinese entrepreneurs were heading overseas in an attempt to protect their assets, better educate their children and enjoy an improved quality of life.”

“Their departure will be a great loss for China,” said Wang Huiyao, one of the report’s authors.

These findings concur with a 2011 Bank of China and Hurun, the Shanghai-based publisher of a Chinese ‘rich list’, which claimed half China’s millionaires, not necessarily the heirs of the Eight Immortals, were contemplating pulling-up stakes.

“I think it’s a very significant political hot potato,” he said, while listing education, pollution and food safety as some reasons driving the trend.

Mr Hoogewerf said emigration wasn’t undertaken to discard attachment to China but to acquire foreign residency to ensure family assets were out of Beijing’s and others’ reach.

Many simply seek diversification of risk, suggesting China’s princeling era has failed dismally in cultivating a sense of confidence among those with most to lose and the ability to leave for safer pastures, even if only intending to do so temporarily.