Founder fired up for tech success

Perth is well placed to become an IT hub, but the people involved in the start-up community may need to collaborate to make it happen. 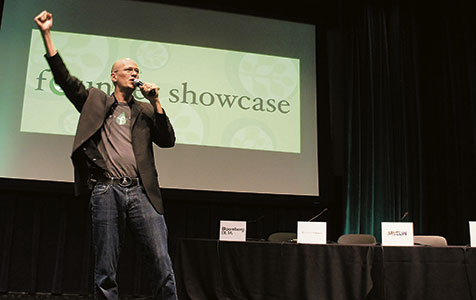 Adeo Ressi is CEO of the Founder Institute, an idea-stage incubator for high-tech entrepreneurs with chapters in more than 50 cities worldwide, including Perth.

Based in Silicon Valley, the institute launches 1,000 companies worldwide every year.

Mr Ressi says it’s likely another tech hub will be housed somewhere in our region in the near future, with Perth competing with places such as Sydney, Singapore, Kuala Lumpur and Manila.

The possibility of such an opportunity for Western Australia’s technology sector was one issue Mr Ressi discussed in a recent interview with Business News from his home in California.

BN: Can you outline your background?

I’m a serial entrepreneur. I’ve developed eight companies (the Founder Institute is my latest, established in 2009) and together they have created $US2 billion in shareholder value. While it pales into insignificance against the latest deals (WhatsApp recently sold to Facebook for a reported $US19bn), they were built from scratch and ranged from digital media to professional services to gaming to space exploration. Over 20 years I’ve run private and public companies, some with 1,000 employees and some with just a handful.

BN: What’s it like to work in Silicon Valley?

It’s the Hollywood of start-ups. Everyone gravitates to Hollywood for movie making like everyone gravitates to Silicon Valley for start-ups. It’s an extreme concentration of some of the top 1 per cent to 5 per cent of investors, entrepreneurs, inventors and everyone else involved. It’s extremely collegial, with a concentration of the major players. Some of these companies (Google, Facebook, Twitter) affect almost every corner of the globe with their services.

And yet, despite these high-profile winners, the failure rate is actually worsening, not improving. I believe entrepreneurship is in crisis. Its popularity has brought many more people on board, but whereas 20 years ago perhaps one in 100 was a success, today only one in 5,000 of these start-ups seems to achieve success in a meaningful way. This is the reason I established the Founder Institute, of course, to try and improve this success rate.

BN: There are high-profile tech start-up centres found in New York, Denver Colorado and Israel – how do they compare?

Yes, there are other places, but you cannot easily replicate Silicon Valley in another region. Those places have developed their own social networks and businesses, which can be very different.

BN: What do you think Perth needs to do to become a tech hub?

In many ways Perth has many things going for it – it’s in a developed country, English speaking, with a huge regional population nearby, the economy is solid, there’s good wealth, high education, low corruption. It ticks a lot of boxes.

I think Perth could go one of two ways. It seems to have a flourishing ecosystem, but the players within it need to make a choice – they either collaborate and grow or they will splinter and things will not develop so well.

It’s especially true if there is government money around. If people compete for these limited resources then the pace will be held back. I would urge those involved to get together and build the community.

BN: Why did you choose Perth as your first Australian city for Founder Institute?

Certainly we had our eye on Australia, and when we set up a new centre we look at the market and also the director. With Dash (Dhakshinamoorthy, the Perth director) we had a global leader and thinker when it comes to start-ups. He happened to be living in Perth, and along with (co-director) Claire Robertson, we knew we had the people in place.

BN: How did the first Founder Institute semester go in Perth last year?

Excellent. I’ve met some of the graduates, some of them have come over here and I’m proud of their progress. I have my fingers crossed for them. But you never know if a company is a good idea for about three years, and it can take seven to 10 to know it really works. So time will tell.

BN: You’re also setting up a Founder Institute in Melbourne and also in Sydney.

Sydney is already established, and Melbourne is now getting going.

BN: What’s exciting you at the moment in the world of tech?

It’s an amazing time to be alive. We’re walking around with highly aware mobile devices tethered to an amazing array of data which have almost unlimited processing power. My mobile phone can SMS any appointment if I am running late automatically. Any business that can unleash this power will do incredibly well. There has been nothing like this possible before.

The next Perth Founder Institute semester starts in March; for more www.fi.co