An iconic fixture at many sporting and cultural events, food vans are going gourmet, with pies and chips giving way to more sophisticated cuisine that, increasingly, is competing with the bricks and mortar hospitality sector. 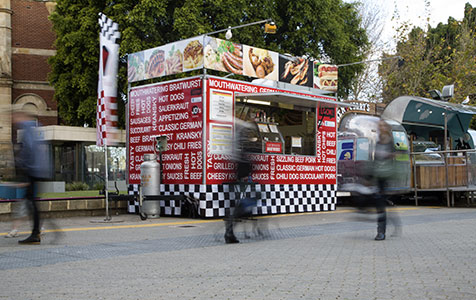 An iconic fixture at many sporting and cultural events, food vans are going gourmet, with pies and chips giving way to more sophisticated cuisine that, increasingly, is competing with the bricks and mortar hospitality sector.

Food vans operators had a significant presence at the recent Good Food and Wine Show held at the PCEC, while several have set up shop in the Perth Cultural Centre, providing a different way of boutique food producers to find a market.

The founder of Asian-focused Jumplings, Ray Chin, is a leading representative of gourmet food vans in Perth.

“Food vans have been around for a while, but it’s the type of food we’re doing,” Mr Chin told Business News.

“Instead of pies and sausage rolls we’re doing something a bit fancier.”

He said food van operators were supporting each other to grow their businesses.

“The community is working hard for each other,” Mr Chin said.

“We’re trying to get as many people as we can in the market … more food vans increase the market base a lot more.”

Mr Chin had the idea to join the food van movement after he had trouble getting a foothold for his dumplings in major supermarket chains.

“It’s really hard to get a product into a supermarket and sell it; we tried going into the supermarket scene, but no-one knew the brand,” he said.

He turned to food vans to build and grow a customer base that would look for his product when it was on supermarket shelves, treating it as a marketing opportunity.

“It’s an easy way to gauge when to go back to the supermarket,” Mr Chin said.

Food vans benefit from the mobility to move to meet demand, setting up at major events and moving on when customers decrease.

In combination with potentially lower overheads, this gives food vans a competitive advantage over bricks and mortar outlets.

Regulatory requirements are as onerous for vans as for many brick and mortar businesses, including approval of vehicle modifications, electrical and gas, health and OHS, and trading permits for a van’s chosen locale.

A permit for a single event could be as much as $73, while an annual permit to trade in the City of Joondalup is $680, and costs multiply across Perth’s many local government areas.

The City of Perth has rigid restrictions on vans but is reviewing them.

“The use of mobile food vans is only permitted at events on reserves and the vans cannot operate on streets or reserves or elsewhere in a semi-permanent fashion,” a City of Perth spokesman said.

“The City of Perth is currently exploring options to undertake a mobile food and beverage trial. Such a trial may include food trucks, coffee carts and food vans.

“The purpose of a mobile food trial would be to test concepts and manage and respond to challenges and opportunities as a trial proceeds.”

“You see things that are kind of fashionable one year and then they aren’t the next,” she said.

“Food vans are just one of those things that people find is quite fun, it’s informal and it’s just an interesting way of having a meal.

“We used to have quite a formal restaurant that we built on the show floor; it was great and catered to about 120 people, but you did have to sit down – it was more of a formal setting.

“Food is important. People want to chill out and have something to eat, but that formal dining is almost something that is behind us now and food trucks are pretty hot around the country.”

Vans have also been a hit in Perth Cultural Centre, according to Metropolitan Redevelopment Authority executive director of place management, Veronica Jeffery.

“In April 2014, the MRA sponsored the inaugural Food Truck Rumble where 17 food vans took residency in the Perth Cultural Centre for a day,” Ms Jeffery said.

“More than 10,000 visitors enjoyed a range of culinary delights and the event was a great example of activation and experiment.”