Food to dine for

A gourmet deli in Subiaco with a winning formula for success is expanding its business. 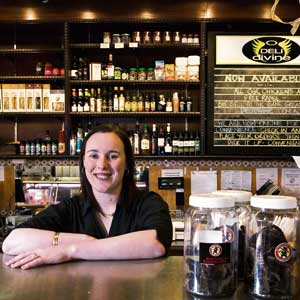 FROM successful franchisees to hard-working owner-operators, husband and wife team Yvette Jones and Michael Donald are on track with plans to establish a network of gourmet delicatessens in the western suburbs.

For the past two years, the couple has been fine-tuning operations at their gourmet deli in Subiaco, and they are now expanding with another outlet opening soon in Claremont.

Back then it was known as Sass's Deli and, as Miss Jones describes it, the location was in need of some 'TLC', so the couple began the process of rebranding the business as a purveyor of fine foods and gourmet products, with customer service the top priority.

Divine was the pair's first venture into a business over which they had complete control, following more than a decade working behind the counters of Lenard's Chicken franchises in Kingsway and Floreat. It was this autonomy that really attracted them to the business.

“After being involved in franchise businesses for a while we were ready for a change, and we wanted to start developing our own brand and have something we could call our own," Miss Jones says.

Located alongside Farmer Jack's in the Crossways Shopping Centre, Miss Jones and Mr Donald renovated the shop in October last year at no cost, thanks to a deal organised with the neighbouring supermarket.

In return for about 10 square metres of floor space, the supermarket paid for the couple's renovations, including a new kitchen, cool room and display fridges with wooden veneers.

This no-cost arrangement allowed them to enhance the brand of Deli Divine by investing in marketing and other areas of the business.

“With the help of franchising we learned a lot about marketing and branding and how that helps you," Miss Jones says.

“When we took over the deli, with the help of a graphic designer we developed a logo and the name ... and my husband can take credit for the slogan, 'Food to dine for'.

“Then we invested a lot of money into marketing, staff uniforms and building more of a brand.

“Plus we put in a freezer and invested money into new equipment."

The lessons Miss Jones learned during her time in the franchise industry have paid off handsomely now that she is her own boss, especially in terms of the calibre of staff she looks for.

“You hire attitude and you train skills," she says.

“That was part of the Lenard's philosophy, as well as being self-instilled."

This focus on customer service and staffing has been a vital ingredient in the company's 20 per cent annual growth.

“We have a very short philosophy in store with staff so they know where their priorities lie: number one is always the customer; number two is hygiene; and the third is the counter or retail," Miss Jones explains.

“So if they're busy and they need to prioritise something then they know that's the avenue they go, especially on the weekends when we're flat out.

“It helps create a system so if I'm not here or have to step out, the store still functions."

During the next three weeks Mr Donald, a qualified butcher and former meat manager for Coles Myer, will be winding up the couple's Lenard's franchise in Floreat.

The pair will then be sharing the workload at the Divine business, albeit in different areas.

“We generally stay out of each other's paths and it works well from that aspect."

While the Claremont Quarter shop is set to open in early December, the couple plans to open five Divine outlets in Perth over a 10-year period, with the northern suburbs and Mandurah in their sights.

“That's our goal, and two in two years so we're on track," she says.

“We just want Deli Divine to become a household name."