Azumah Resources has substantially increased the potential for underground mining at its flagship Wa project in Ghana after hitting an amazing 93m intersection grading 2.33 grams per tonne gold from 261m down-hole at the Bepkong East deposit. This includes two high grade intersections of 9.9m @ 8.42g/t gold from 295m and 2.16m @ 21.17g/t gold from 303m. Assays are pending on two other holes drilled at the deposit. 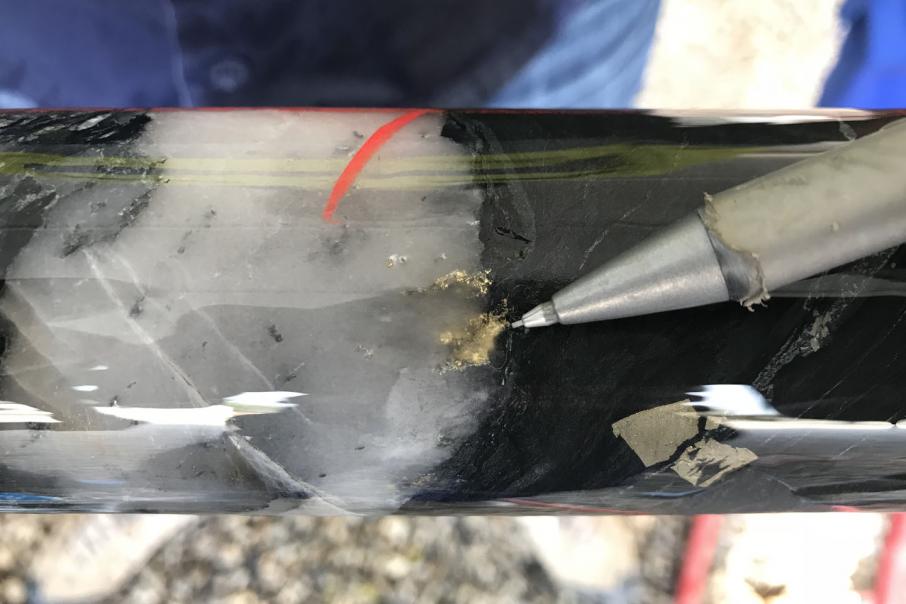 Visible gold in one of two Bepkong East holes that are currently awaiting assay results.

Perth based gold explorer Azumah Resources, has substantially increased the potential for underground mining at its flagship Wa project in Ghana after hitting an amazing 93m drill intersection grading 2.33 grams per tonne gold from 261m down-hole.

The discovery adds to the already substantial near-surface Bepkong JORC resource 245,000 ounces at 1.5g/t gold that includes an ore reserve of 113,000 ounces at 1.85g/t gold.

Management said the results indicate the presence of a mineralising fluid conduit system that is likely to extend to considerable depth.

Assays are pending on two other holes drilled at Bepkong East, one of which intersected visible gold which will no doubt quicken a few pulses for Azumah followers.

The company expects to release an updated ore reserve and feasibility study in January 2019.

Azumah Managing Director Stephen Stone said: “This magnificent drill intercept, from the very first hole drilled of a new 40,000m multi-target drilling campaign, is further proof that the Wa Gold Project has so much more to deliver as it transitions towards development.”

“In the short term, we are looking forward to obtaining the drilling results from two other complementary deep-targeted holes just completed at Bepkong, along with two others underway at the Kunche deposit, where last April we also demonstrated the presence of high-grade mineralisation at depth.”

“This is all consistent with the structurally controlled orogenic-style of mineralisation that hosts the Wa gold project and which we know can extend to considerably greater depths than we have been drilling.”

The program is designed to test for open-ended depth extensions to bottom-of-pit high-grade mineralisation at the Kunche, Bepkong and Julie deposits in a bid to expand current resources and develop new prospects.

This includes an ore reserve of 624,000 ounces going over the magical 2g/t gold mark.

Ibaera is investing close to A$17m in two stages over 2 years to acquire a 47.5% direct interest in the Wa gold project tenements and it is managing the exploration and development activities of the JV on-site in Ghana.

That the very first hole in the 40,000m drill campaign has returned such a large mineralised zone with high grade intersections is an impressive feat and provides encouragement for the rest of the program.

This one is going to get exciting in the new year.