Fine-tuning the art of slow food

Kim Gamble has put his heart and soul into Kim’s Food Bar, his latest venture in Cottesloe, which pays his biggest homage yet to slow food. Emily Morgan reports. 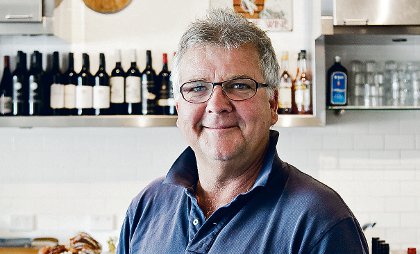 Italy’s slow-food movement has its cynics but, as seasoned hospitality operator Kim Gamble explains the philosophy behind his new venture, Kim’s Food Bar, it becomes apparent he is a firm believer in “reducing food miles”.

Mr Gamble has been in the hospitality industry since he was 25 when he opened Kim’s Bar in Claremont. He followed this up with ventures including Bar Ferrari, Kim’s Beach Bar in Fremantle, Howard Chambers in Perth, The Blue Duck in Cottesloe and its neighbour Barchetta.

But his newest operation pays his biggest homage to slow food yet.

He explains that he has been to the markets in the morning to buy supplies for the day and sampling is the only way to go about stocking the fridges.

“You see some beans that have been grown with love and there might be two boxes of those rather than six boxes that look good that are made for an IGA store,” he says.

He returned with fresh mangoes that are almost immediately put on the specials board as part of a dessert – instant gratification for the restaurant’s mode of operation.

As he talks about his broader ideas that go against the grain of the modern day supply chain typified by mass production, the driving philosophies behind Kim’s Food Bar become acute – Mr Gamble is all about using local suppliers and producers to create seasonal menus.

He explains that through 20 years of operating The Blue Duck and Barchetta in north Cottesloe, a strong band of suppliers was developed – relationships represented by the fresh bread, antipasti, cakes and pastries displayed on the benches of Kim’s Food Bar – all made with love by locals.

He has applied the principles of slow food to the fit out of the restaurant as well, the most obvious example being the chairs, which hail from the 1970s and were made in O’Connor.

Mr Gamble says it is challenging to build a business plan around slow-food principles but, having only opened the venture in June, the formula is developing constantly.

“It is a little bit tricky trying to get the market to understand,” he says.

“We get veal from a particular person, select the right cut and the way it has five months on milk and a month on the land for the balance of flavour … they are the things we are passionate about, but then you have to make a business out of it.”

Mr Gamble sold out of Barchetta in 2008 and took some time off before developing Kim’s Food Bar. With a staff of 10 who run the restaurant from 11am until late in one shift, the venture is a smaller one for Mr Gamble, who ran 24-hour operations at The Blue Duck and Barchetta, with 100 staff between them.

He says day trade in the retail and hospitality strip in Cottesloe has been slower than what he initially anticipated.

Mr Gamble says that means he has to adjust his opening hours and broaden the menu to attract a wider market.

“I love being part of the street and the community, and we just have to make a financial model out of it,” he says.

The business won’t be the only one in his portfolio for long; Mr Gamble is in the throes of developing a bakery-cum-bar-cum-restaurant in Fremantle.

“We are in the design phase and the semi-building phase,” he says.

“We have got the guys from Yallingup Woodfired Bread involved and it is a very organic concept, for example, we are not going to be using any imported mineral waters, we are using local stuff and trying to keep everything within this. I think it is so much better if we can do that.”

“I have really discovered that you can have really fantastic food, but it requires a lot more than that.”