Despite being an agnostic in terms of anthropogenic global warming, John Howard was spooked by Labor and the Greens in 2007. 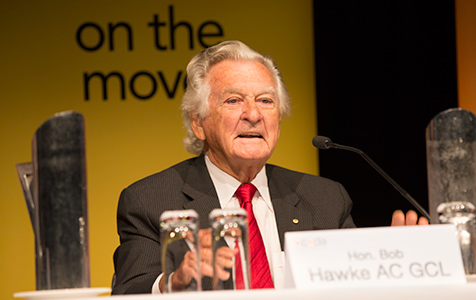 CHANGE AGENT: The reforms undertaken by Bob Hawke outweigh those of the Howard years.

My initial response to the results of a poll on Australia’s best prime minister of the past four decades was to compare its findings to the views I hold.

“The poll, conducted last week by Essential Research and provided exclusively to The Australian, [March 10, 2014] shows that 39 per cent of voters ranked Mr (John) Howard, the Liberal prime minister from 1996 to 2007, as the best,” that newspaper reported.

“Labor’s Mr (Bob) Hawke was rated as the best prime minister by 14 per cent of voters.

“In sixth and seventh place, respectively, were Julia Gillard (4 per cent) and Malcolm Fraser (3 per cent).

“Nearly three-quarters (73 per cent) of Coalition voters selected Mr Howard as the top prime minister among the eight who have served in the position since December 1972.”

Because the poll covered a 42-year period, pollsters Essential Research presumably excluded voters less than 60 years of age; that is, anyone who was 18 years or younger in 1972 when Whitlam became PM.

As I fall into the target age cohort, and certainly recall the Whitlam government and its sacking, here’s how I’d rate Australia’s past seven PMs, excluding Mr Abbott since he’s barely into his first, and maybe last, term.

Also undoubtedly are Mr Whitlam, Mr Rudd and Ms Gillard a very distant equal last, with Messrs Keating and Fraser just a pip or two ahead.

That leaves Mr Howard, by default it should be stressed, since the five below were so fifth rate, second to Mr Hawke in my view.

So why are my opinions, all seven, so out-of-kilter with others of my vintage?

That constitution created a federal – not centralist – nation, and apart from Mr Fraser’s early tentative moves away from centralised government, all the others were rock-solid centralists.

Unfortunately it was during Mr Fraser’s seven years that several important, commissioned reports on how Australia’s economy could be reformed (modernised) were largely ignored.

He lacked courage, which puts him towards the end of the line.

However, as the Hawke government embraced much of the advice coming its way via privatisation and deregulation – essentially along the pathway Margaret Thatcher used to help reinvigorate Britain’s commercial life – he skyrockets to the top.

But there’s an important qualifier, which is that the early Hawke years (1983 to about 1987) were really Hawke-Keating years.

They reformed jointly (with WA senator Peter Walsh’s crucial drive and guidance) on far-sighted modernisation, something Mr Fraser and the Liberals wouldn’t or feared to embrace.

But despite Mr Keating sharing the glory early in his ministerial career, his thankfully short-lived years as PM and his often-insultingly dismissive manner of opponents means he joins Mr Fraser.

Mr Howard goes no higher than second because despite paying down the national debt accumulated by Messrs Hawke and Keating, his government was more centralist than that of Mr Whitlam.

However there’s something else that’s equally grave, in my opinion, something invariably overlooked by fellow Liberals and the media, and never mentioned by Labor or the Greens.

And that’s Mr Howard’s little known National Greenhouse and Energy Reporting Act (NG&ERA), which he so hastily enacted just before losing the 2007 election.

This crucial piece of legislation laid the basis for the Gillard-Greens “carbon tax” that we were promised we’d never get.

Mr Howard continues to claim he was and is an agnostic on what’s called global warming, or now more often climate change, but which I refer to as the global heating hoax.

If that’s so why did he enact the NG&ERA that forces electricity generation stations and other sizeable coal, gas and dieseline users to annually audit and report what’s called their emissions, meaning CO2?

The answer is that he feared the Greens and Labor who ardently promote the hoax.

Put otherwise, like Mr Fraser, Mr Howard lacked courage and so went along with those promoting the hoax, and in the process laid the groundwork for the imposition of higher energy costs on Australia’s economy.