Farmers cut out the middleman

WESTERN Australian farmers and growers are feeling the effects of the economic downturn as the big supermarket chains put the squeeze on their supply chain. 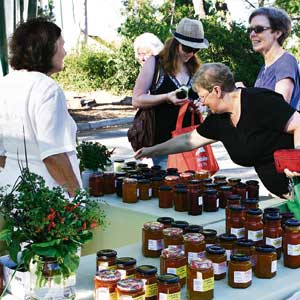 FRESH AND TASTY: THE ARMADALE PRODUCERS MARKET IS PART OF A GLOBAL PUSH FOR FARMERS’ MARKETS, WHICH FOCUS ON SUPPORTING LOCAL GROWERS WHO ARE OFTEN SQUEEZED OUT OF THE MARKET BY SUPERMARKET CHAINS. PHOTO: COURTESY ARMADALE REDEVELOPMENT AUTHORITY

WESTERN Australian farmers and growers are feeling the effects of the economic downturn as the big supermarket chains put the squeeze on their supply chain.

However, the rising in popularity of farmers' markets is giving local producers the opportunity to sell their produce direct to the public, and now they are reaping the financial rewards.

"It gives them more control over their produce - by dealing directly with the consumer they cut out the middleman."

The Armadale Redevelopment Authority, in conjunction with the South East Metropolitan Public Health Unit and the City of Armadale, established the Armadale Producers Market (APM) in November 2008.

The not-for-profit initiative is run by a management committee, comprising a group of volunteers who contribute their time and expertise to look after the legal, financial and promotional aspects of the markets.

The APM directs all profits back to the operation of the market to cover advertising costs, insurance, equipment, rubbish collection, and maintenance.

Armadale Redevelopment Authority business development manager and inaugural APM chairperson, Shelley Pike, said there was a global push for farmers' markets, which focused on shopping locally, reducing the distance food travelled to the consumer, and ensuring the availability of seasonal produce.

Ms Pike told WA Business News the market was also helping to stimulate the local economy by encouraging consumers to support farmers and keep money within the community.

"WA is far behind in respect to growers' markets around the world and in Australia, so we wanted to look at a fresh way of making the markets more sustainable."

In a bid to become self-sustainable, the APM has employed a community membership model where members pay a fee each year to the APM and receive a 10 per cent discount on market purchases, similar to a customer loyalty scheme.

All produce sold at the markets is grown in WA and is picked weekly or prepared each week to provide customers with seasonal food, as well as nutritional information about the produce.

Jam, chutney and pickle maker Valda Gratton said that, as a sole producer, markets such as the APM were of great benefit during hard economic times.

"Consumers enjoy the relaxed atmosphere and experience of the market while getting fresh, healthy produce at affordable prices, which is important during tough times," Mrs Gratton told WA Business News.

"We benefit by selling directly to our customers and they know they are getting quality goods at a comparable price, and that their money is also helping us."

The APM will be relocated to the agricultural showgrounds at Rushton Park in Kelmscott from July 5.