Many winemakers suggest their passion for wine courses through their veins but few have the pedigree to prove it. 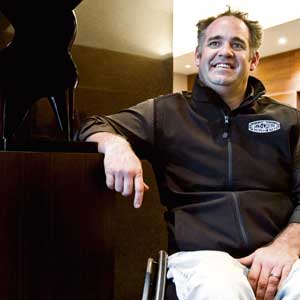 DARREN Haunold always felt that winemaking was in his blood, but it wasn't until he discovered a lineage in the winemaking industry stretching back 700 years that he truly appreciated the familial connection.

Fitting, perhaps, as Mr Haunold is the owner and manager of popular boutique Margaret River winery, Wills Domain, which is named after a common Haunold patriarchal moniker also steeped in history.

"Point being, there's a 700-year lineage in winemaking in our family that I only just came across."

The winemaking ancestry was unearthed thanks to his grandmother translating various ancient Germanic texts while researching the Haunold family tree.

"She discovered all this lineage in winemaking in Austria, which is nearly 500 years consistent production from this particular estate, that we sort of draw a line from and, I guess, transpose time and tradition to modern day Margaret River," Mr Haunold says.

And he has no intention of slowing down or changing career any time soon.

"Yes, it's in the blood, but to be perfectly honest I would never have known it if I didn't work in a vineyard, because as soon as I started working in vineyards everything fell into place," he says.

"I'd work seven days a week in a vineyard and not bat an eyelid and just love it; it's the best office in the world.

What's remarkable about Mr Haunold is that, while he loves his work and actively participates in all aspects of the business, he's also a paraplegic confined to a wheelchair.

In April 1989, shortly after turning 13, he fell from the roof of his house while helping a painter at his family home, waking up in a garden bed unable to move his legs.

Six weeks of intensive care and about five months of rehabilitation in hospital in Shenton Park were to follow.

But to suggest Mr Haunold is anything but overtly positive about his situation, and life generally, is a massive understatement.

"As a paraplegic in Shenton Park I was surrounded by quads (quadraplegics) and I was thinking 'I am the luckiest guy in here, no doubt'," Mr Haunold says.

"People from outside go 'dude, you must be miserable' and that's their perspective, but my perspective is 'hey, hang on man, I'm still alive, I'm having fun, I can have a laugh'.

"It could've been a lot worse for me."

He cites the adaptability of being a 13-year-old and immense support from his family as the prime reasons for his recovery, which soon led him to pushing the boundaries of what he could achieve.

This included representing the state, and the country, in wheelchair basketball and even developing skills in adrenalin-pumping sports such as snow skiing, water skiing and scuba diving with the help of lifelong friend, Jeffrey Vidler.

But don't ask him to leap out of a plane or consider bungee jumping.

"I'll give most things a crack as long as it makes sense, I'm not one for bungee and crazy stuff," he says.

"Skydiving is out of the question."

Mr Haunold's buoyant persona is also reflected in the work he does on a daily basis at the winery.

"I set that example at work. Like I don't say 'I'm in a wheelchair I can't mop the floor'; I mop the floor, I sweep the floor, I do all the stuff I want my staff to do and they see me doing it and they know there's no reason they can't do it," he says.

This hard work has paid off for Mr Haunold who, after buying the vineyard in 2000 and developing the winery and tourism facilities, has since won an immense number of wine show awards, complementing his treasured WA Business News 40under40 First Amongst Equals Award from 2004.

But he says his greatest achievement is his family, wife Michelle and young son Oliver, who simultaneously keep him very well grounded and floating on cloud nine.

Do you have a personal mantra?

I suppose I tend to use the old phrase 'nothing good ever comes easy'. I guess I like the results of hard work - I don't expect anything to fall in my lap but when it happens it's wonderful. You seem to get much more satisfaction out of things you earn as opposed to things you have.

Dad has had a big influence on my life and I guess my morals are from him, and I have particular respect for Andrew Forrest as I've had a bit to do with him over time. I respect the hard yakka he's put in to get where he is, and now it's how he is reinjecting that energy and financial assistance back into communities - and I think that should be a responsibility of business, to reinject their success back into the community. That should just be a natural thing.

What did you want to be when you were a kid?

I think I wanted to be a fighter pilot in the air force. I've always had a fascination with helicopters, and I'm still blown away with all that. And I hope one day, if I ever retire, I hope to find a chopper I can adapt to handle me and away I go.

Probably my family, my little boy, any dad would agree. I admit certainly the business is a massive success, but if he [son, Oliver] wasn't around then it wouldn't happen. And going back to my accident, that sometimes guys in wheelchairs can't actually do that [have children], so I was again very fortunate.