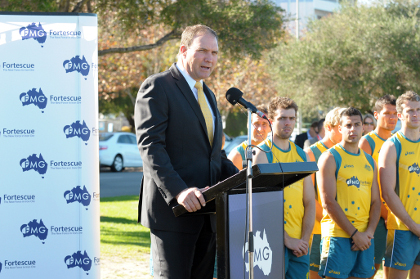 FORTESCUE Metals Group has stepped up its backing of the Kookaburras Australian men’s hockey team with a two-year deal to become its major sponsor, signing up just weeks before the gold medal favourite tackles the Olympics.

The deal, estimated to be worth at least $200,000 per year, gives FMG prominence at the Kookaburras peak opportunity for exposure, but also gives Hockey Australia significant funding certainty for the team during the post-Olympics rebuilding phase.

Despite being the most successful Australian Olympic team during the past three decades the Kookaburras have never had a major sponsor.

In fact, until this year, the sport lacked a significant backer since the Hockeyroos decade-long deal with Telstra ended after the Sydney Olympics in 2000.

However, mining-related firms have now filled the breach for both the men’s and women’s team which are both based in Perth. In March, mining services company Ausdrill signed on as a major sponsor of the Hockeyroos, the Australian women’s hockey team, in a two-year deal.

After today’s official announcement, complete with banner draped from the roof of FMG’s headquarters overlooking the Swan River and former Langley Park hockey fields, CEO Nev Power said the move to become the Kookaburras major sponsor resulted from the success of a recent targeted engagement to work with indigenous children in the Pilbara.

“The key for us is the culture and value-fit with the Kookaburras,” Mr Power told WA Business News.

“We have watched that and we have seen the tremendous fit with the values we espouse.”

FMG first directly engaged with Hockey Australia when it announced a five-year National Indigenous Partnership at an international hockey tournament which coincided with Commonwealth Heads of Government Meeting in October last year.

Since then, the Kookaburras, including two indigenous squad members Des Abbott and Joel Carroll, have travelled to the North West to work with aboriginal communities in the Shire of Roebourne in a bid to use sport to develop leadership skills, encourage active participation, community engagement and talent identification.

Mr Power cited the family culture, where everyone supported each other, mateship and determined resilience as shared values between the brands of the sporting team and the company.

FMG is currently employing two Australian squad members on a part-time basis, allowing them to maintain a training travel and playing regime which has increased in intensity as the Olympics approaches.

The Kookaburras are the number one ranked men’s hockey team in the world.

According to Hockey Australia, the Kookaburras are the only Australian team, male or female, to win a medal at each of the last four Olympic Games.

The men’s hockey team has been placed in the top four in every Olympic Games between 1980 and 2008, they have been Australia's most consistent performer in any Olympic team sport.

But the sport is mainly amateur, relying on government funding to run its national teams, while many elite players head to Europe where the sport pays top athletes and also provides strong connections for career opportunities, especially in the professions.