Ex-minister says Barnett is a 'dictator' 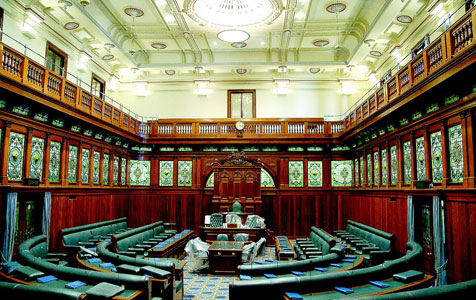 Former police minister Rob Johnson has attacked Premier Colin Barnett as a "dictator" after he was overlooked for the role of speaker of the legislative assembly.

In an extraordinary series of events on the first day of WA's 39th parliament, Mr Barnett put backbencher Michael Sutherland forward for the role of speaker only for Mr Johnson to challenge his nomination.

Mr Johnson's nomination was seconded by Labor MP Mick Murray, who scraped back into his seat in Collie-Preston by 56 votes.

After a ballot of members, Mr Sutherland won 33 votes to 26 - which meant at least four Liberal or National members voted against party lines and the Premier's chosen candidate.

Mr Johnson, who is still unhappy about being dumped as police minister by Mr Barnett during the last term of government, had wanted to be nominated by the government as Speaker and had said so publicly.

He said the look on the premier's face had been worth the trouble of the move against him and claimed he thought he might have had the numbers to pull off a shock.

But he said some MPs "had been got to".

The former police minister then went on to make much more scathing assessments of Mr Barnett's leadership style.

"There are people on both sides of the house that voted for me and I am very grateful for that, and if nothing else it was worth it to see Colin Barnett's face when I nominated," Mr Johnson said.

"He was pretty angry, but he is not a very happy person a lot of the time, which is a problem Colin has."

The day after the premier rammed through a plan to re-merge two parts of the state's power utilities despite fierce industry opposition, Mr Johnson went on to accuse him of bullying tactics.

"I didn't like the fact that Colin Barnett seemed to think he could dictate who would be the Speaker," Mr Johnson said.

"Colin Barnett is not the government. I think he's a bit above himself these days."

Mr Johnson went on to take a swipe at a lack of female representation in the cabinet and also turned his attention to the issue of rising state debt.

"It's $18 billion now. It's going to go up to $25 billion, with the election promises we're looking at nearly $30 billion. It will take decades to pay that sort of debt back," he said.