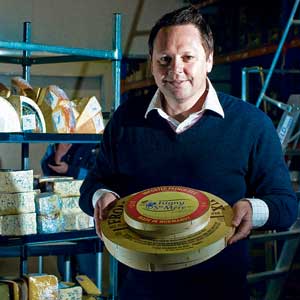 However, all those cheeses are sold in Western Australia and are becoming part of our culinary culture, with local wholesalers working hard to bring more boutique European cheeses to supermarket shelves and restaurant cheese boards.

Cheese importers are no longer selecting their products just for the consumption of the local European communities, but are increasingly playing an educational role.

And it seems cheese is good business.

Blue Cow Cheese Company, which was started 10 years ago by Nicholas Bath, has been focusing on importing European cheeses from France, Italy, Spain, Switzerland and, more recently, Portugal.

Mr Bath says Blue Cow has been well accepted from day one, but it is really in the past five years that business has thrived.

The company doubled its staff to 26 employees in five years, as well as doubling its revenue.

Last January, Blue Cow opened an office in Margaret River to cater to the needs of the local wineries and their evolving menus.

Mr Bath says he is about to appoint a second staff member to the South West office.

European Foods has been getting a weekly shipment of specialty boutique cheeses for the past three years.

"It's not easy to import fancy cheeses to Australia, but it is worthwhile; we now import a lot of Camembert with our weekly air shipment, as well as Roquefort, Brie, Bleu de Basque," Ms Ferrari told Gusto.

"We have been importing cheeses from Europe for the past 40 years. Our market is more European - Italians or Spaniards - who want cheeses from home,

"That was what European Foods was about, to start with, to have the same food as people's homeland."

Blue Cow works with Melbourne business, Calendar Cheeses Company, to consolidate its orders. All the cheeses are shipped to Melbourne from Europe, and then to Perth.

"We work with a company in Melbourne to ship our orders in because Australia is still a small market. We have an agent at the Rungis markets just out of Paris who works with the small producers and consolidates our orders," Mr Bath says.

"Our agent will order things like Blue d'Auvergne, Fourme d'Ambert, Brie, Camembert, but it means that we can also access smaller boutique cheeses.

"We focus on bringing artisanal, traditional cheeses from France, Spain, the UK and Switzerland and we believe in bringing whole wheels of cheese."

Mr Bath says it is crucial that the company invests considerable time and effort educating the customers about its products.

"When we started, people weren't necessarily aware of the French, Spanish and Italian cheeses that were available; part of this is to sit down and explain the nuances," he says.

"People would look at a Brie and at a Camembert and say 'what's the difference?' Well, a traditional Brie is a large wheel, very shallow, and has a different flavour profile. Camembert is from Normandy, it's a smaller deeper cheese, it has a more pronounced cauliflower nose, it has different characteristics."