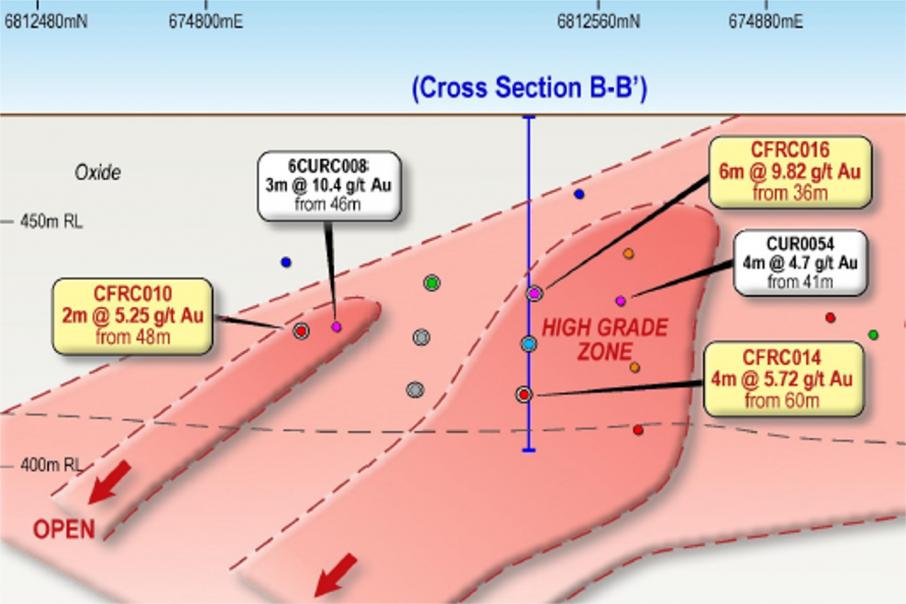 Venus management said the present drilling is only testing the oxide zone and that the gold mineralisation remains open along strike and at depth, down-dip, into the fresh rock profile.

Drill sections through the gold mineralisation at Currans Find North also indicate that there may be a higher-grade plunge component to the gold shoots, which is very common in WA Goldfields-style ore deposits.

The old mine workings at the prospect outline a mineralised gold envelope about 150m long that is interpreted to plunge towards the southwest.

In addition, drilling beneath the Red White and Blue Reef workings about 1km to the south, produced numerous narrow, high-grade intersections peaking at 4m @ 4.81g/t gold from 36m down-hole.

As with Currans Find North, the gold mineralisation at Red White and Blue appears to form clusters within broad anomalous ore zones, which is not dissimilar to other gold deposits in the district like Spectrum Metals’ Penny West project, located about 5km to the south southeast.

The artisanal workings at Red White and Blue are located intermittently over a strike length of about 300 metres, which has only been drill targeted within the oxidised zone to date.

The JV partners are planning follow-up drilling to test the Currans Find North, Red White and Blue and Taylor’s Reef prospects, targeting areas along strike and down-plunge of the identified gold mineralisation.

The project area is located in the underexplored Youanmi greenstone belt and the gold is associated with quartz veining in sheared mafic and ultramafic rock sequences similar to the Penny West open pit nearby, that produced just over 85,000 ounces grading 21.8g/t gold in its day.

The Currans Find JV gold project and nearby Pinchers JV project are 45% owned by Venus and Rox, with the original vendor, prospector Mr Doug Taylor, retaining a 10% interest in the ground.

Historical records show that the Currans Find JV tenement produced just under 3,000 ounces at nearly half an ounce to the tonne in the early 1900s.

The new assay results indicate there’s probably more where that came from and the JV partners will be keen to start wrapping JORC-compliant gold resources around the prospect areas with a bit more targeted drilling.

The gold deposits sit on a granted mining lease, potentially shortening the timeframe to get any future operation into production.