Horizon Minerals has achieved a significant milestone at its Boorara gold mine, 10km east of Kalgoorlie-Boulder, producing its inaugural gold bar less than six months after its stage one feasibility study and some two months after breaking first ground at the Regal East pit. 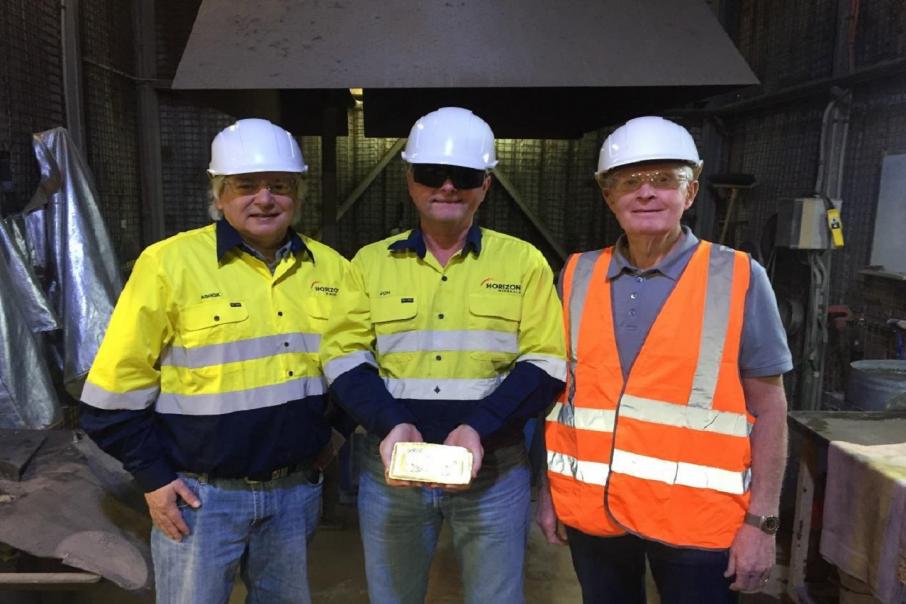 Horizon Minerals has achieved a significant milestone at its Boorara gold mine, 10km east of Kalgoorlie-Boulder, producing its inaugural gold bar less than six months after its stage one feasibility study and some two months after breaking first ground at the Regal East pit.

Horizon Minerals Managing Director and prime mover, Jonathon Price said: “First gold production from Boorara is an exciting milestone for the company and it is extremely pleasing to see the mine performing to expectations.”

Horizon has shipped its gold to the Perth Mint and the company said it should see the first revenues hit its accounts in the coming weeks.

The journey to production has been an interesting one for Horizon who was significantly bulked up courtesy of a merger last year with MacPhersons Resources, the original owner of the Boorara project.

The merger was cooked up by Price and MacPherson’s Chairman and Kalgoorlie identity, Ashok Parekh and looks to have been right on the money with Horizon’s stock tripling from 20c in late April to around 60c.

The coming together of Price, who is a hard-core mining man and Parekh, who is a significant mover and shaker in corporate circles, looks to have been a good pairing.

Horizon brought a smorgasbord of satellite gold projects that are proximate to Kalgoorlie to the table in the merger and MacPhersons brought in Boorara.

With all projects under one roof now Horizon has both short term cash flow opportunities through Borara and scalability, courtesy of its myriad of other satellite projects. First production this week represents a significant underlining of the Price-Parekh strategy.

Mining at Boorara kicked off in early May at the Regal East pit and the Perth-based company said its mine plan is progressing well ahead of schedule.

The fledgling gold miner plans to pull dirt concurrently from the Regal East and Regal West pits so that digging of ore can flow uninterrupted by drilling and blasting.

Horizon has also started mining in the Crown Jewel pit to provide another source of ore to mine, as activity in both Regal pits advances and conditions make it tighter to manoeuvre.

The Boorara ore is being hauled to the nearby Lakewood Mill and management said that unreconciled mill grades appear to be in line with expectations.

Regular milling and gold pours are scheduled through to January next year and so far, around 90,000 tonnes of oxide and transitional ore has been mined from Boorara at a fully diluted grade of 1.5g/t gold, according to Horizon.

With its stage one plan expected to churn out some $7m at current gold prices, Horizon is fast building up a kitty of money to throw at the bigger picture that should see it become a full scale miner in time.