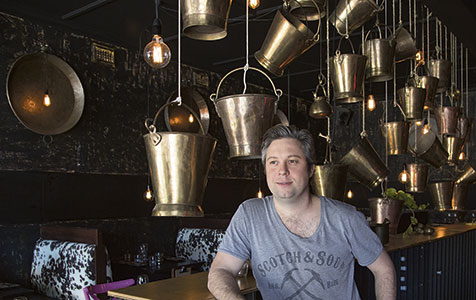 GOOD TIMES: Scott Taylor is indulging a guilty pleasure with the opening of Enrique’s School for to Bullfighting. Photo: Attila Csaszar

Scott Taylor has made a name for himself with the success of The Trustee restaurant in Brookfield Place and the Beaufort Street Merchant in Highgate.

Now, he says, it’s time to have a little fun.

And the good times have started, with last week’s opening of the pop-up venue ‘Enrique’s School for to Bullfighting’ next to the Merchant.

Mr Taylor says the venue’s name isn’t supposed to make sense, as the temporary restaurant is his opportunity to indulge in guilty pleasures that wouldn’t fly at The Merchant or The Trustee.

That means pink chandeliers, music from a 1950s Spanish covers band playing in the bathrooms, and the menu failing to include any details about how the $22 beef is cooked or served.

“The name just came out of my head,” Mr Taylor told Gusto.

“It’s about being a little bit tongue-in-cheek and letting people know that we’re not taking ourselves too seriously.”

In short, the Spanish restaurant is a far cry from Mr Taylor’s two previous culinary offerings.

“The Trustee’s a serious venue, it’s a high-calibre venue; and The Beaufort Street Merchant has positioned itself as an iconic suburban go-to place,” Mr Taylor told Gusto.

“We’ve done the big end of town, we’ve done the classic suburban eatery, so we wanted to do something a bit fun, with a pop-up feel and a slightly bent edge to it.”

Enrique’s sits in the site of the former Raah restaurant and will remain a temporary site until council approvals have been signed off for an extension of the Merchant – expected in the second quarter of calendar 2014.

Mr Taylor says demand is driving the need for more capacity at the Merchant, and that will be achieved by almost doubling the seat count.

The idea behind Enrique’s School for to Bullfighting will continue after the expansion, however, as Mr Taylor says he’ll be on the lookout for future locations for successive Enrique’s pop-ups.

Mr Taylor has a long association with the hospitality sector, starting as a child when he helped his mother at her various venues around Western Australia, including The Pagoda in Como.

“Mum was in hospitality forever, so I earned 50 cents an hour polishing cutlery at eight years of age,” Mr Taylor says.

“Our Christmas mornings weren’t like everybody else’s; it was about getting up and getting the Christmas buffet ready for 150 people, and then dashing home at 11 o’clock to open some pressies, then back to the restaurant for Christmas lunch.”

He says that sort of ‘apprenticeship’ set him on course to fulfil what he believes was his destiny.

“If there was any restaurant I was born to own, it would be The Trustee … and we’ve nailed it on the head,” Mr Taylor says.

“It was the big roll of the dice, it was the ‘if I’m a real restaurateur, I would like to be able to compete on the national stage’.”

Another thing he learned from all those years in the kitchen with his mother was the value of time away from work. So despite his dedication to giving customers the best, with two children at home he says the days of working Christmas Day are well and truly over – both for him and his staff.