Empire Energy has massively boosted its Beetaloo Sub-basin oil and gas resources in the Northern Territory following a strategic takeover of Pangaea Ltd and EMG Northern Territory’s acreage in the basin. Empire trebled its gas resource and increased its liquids resource by 3,000 per cent when it pounced on Pangaea and EMG’s ground. The Beetaloo is believed to hold the largest undeveloped gas resource in Australia. 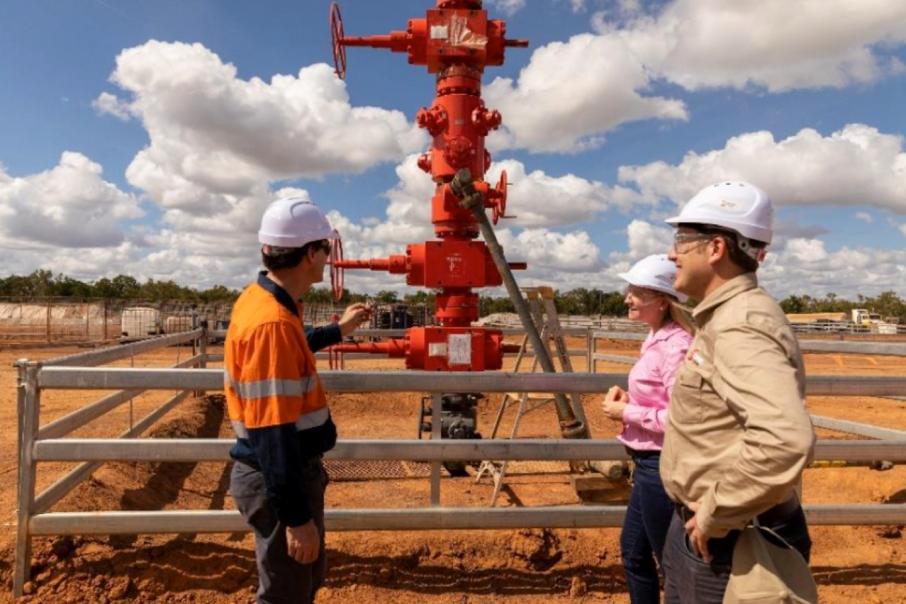 ASX-listed Empire Energy has massively boosted its Beetaloo Sub-basin oil and gas resources in the Northern Territory following a strategic takeover of Pangaea Ltd and EMG Northern Territory’s acreage in the basin. Empire trebled its gas resource in the region and increased its liquids resource by 3,000 per cent when it pounced on Pangaea and EMG’s ground in what is believed to be the largest undeveloped gas basin in Australia.

The company has also moved to restart production testing operations at its Carpentaria-1 well that was suspended back in July due to COVID-19 travel restrictions.

The move comes after the Empire board pushed the go button on funding the drilling of its Carpentaria-2H vertical pilot and horizontal appraisal well and its Charlotte 2D Seismic Survey on permit number EP187.

EP187 is part of the company’s original Beetaloo land holdings prior to the takeover of Pangaea and EMG’s acreage.

Empire is flush with cash too, with some $31 million in its coffers at last report, bolstered by a recent $5.3 million research and development refund cheque from the Federal Government.

The cheque relates to the Government’s recognition under the terms of its Research and Development Tax Incentive Scheme that Empire’s work on its Carpentaria- 1 vertical well and in particular, its innovative development of a new fracture stimulation technique, amounts to “research and development” for which it is entitled to a 43.5 per cent refund under the scheme.

Empire is now the leading independent oil and gas company in the Northern Territory and the lucrative Beetaloo Basin with some 29 million acres of prospective oil and gas ground under its control.

The deal saw Empire take over Pangaea and EMG’s 100 per cent interests in Exploration Permits 167, 168, 169, 198 and 305, located onshore in the Northern Territory’s Beetaloo Sub-basin of the McArthur oil and gas basin. The company shelled out $6 million cash and 150 million shares to close the deal.

Empire first listed on the ASX in 1984 and in 2006, the company joined a natural gas joint venture in the Appalachian Basin in northeast USA.

In preparation for a long campaign in the Beetaloo, Empire strengthened its balance sheet in April with a $37.2 million fund raising and is now well placed to have a serious go at making real money from this lucrative hydrocarbon-rich region.

Underwood was appointed as Chief Executive Officer and Managing Director of Empire in late August 2018. He has specialised in upstream oil and gas investing and financing for nearly 15 years and has done stints with both Commonwealth and Macquarie banks and also with BHP.

The road to commercialisation of the Beetaloo has a well-storied history dating back to the 1960s when gravity data revealed the presence of the thick sedimentary basin. The broader McArthur basin is one of the oldest sedimentary basins on earth with the principle prospective section being of Palaeo-Mesoproterozoic Age. That means the rocks are about 1.3 to 1.4 billion years old. The Velkerri Shale is one of the oldest rock formations on earth to produce natural hydrocarbons. Most of the world’s oil and gas is produced from rocks less than 60 million years old.

Seismic acquisition and drilling of the first exploration wells in the Beetaloo got underway in the 1980s and it wasn’t until Pangaea acquired additional seismic data and drilled seven stratigraphic wells in the western portion of the basin that its true potential emerged. Well known oil and gas entrepreneur, Paul Fudge, majority shareholder of Pangaea, was there from the beginning and now sits on the board of Empire Energy. Fudge was instrumental in opening up the Queensland coal seam gas industry prior to stepping into the then frontier Beetaloo basin. Pangaea now holds twenty per cent of Empire’s stock after the acquisition.

While Empire is something of a frontrunner in the race to develop the Beetaloo, it is keeping good company with major players Santos and Origin also in the race to deliver first gas from the Beetaloo to market. Should the much-vaunted $21 billion Santos-Oil Search merger go ahead, Empire would be sharing the basin with one of the top 20 oil and gas companies in the world. The neighbouring operator’s Origin and Santos are both currently drilling key wells, which will help unlock the potential of the broader Beetaloo.

According to Empire, opportunities to commercialise assets in the Beetaloo include the Northern markets, utilising the Amadeus gas pipeline and McArthur River mine gas pipeline, the East Coast domestic and LNG export market via existing and anticipated pipelines and the Darwin LNG export facilities.

The Australian Energy Market Operator is forecasting gas shortages in Victoria and NSW by 2024 and as early as 2023 for the broader east coast.

Mr Underwood said: “The Beetaloo is earmarked for accelerated development by the Federal government as part of the gas-led recovery post Covid lockdowns.”

Pangaea and EMG had previously ploughed $110 million into exploration drilling and seismic acquisition on the western side of the Beetaloo while Empire was exploring the eastern side of the basin. In its most recent test of the Beetaloo at the Carpentaria 1 well, Empire’s first significant gas flow exceeded expectations. The well flowed at a peak rate of greater than 1.6 MMcf/day and an average flow rate of 0.25 MMcf/d over the 17-day test period. As a result of this test the company lodged a “Discovery Notice” with the Northern Territory Government. Initial gas composition data is also positive with 16.31 per cent ethane and 3.28 per cent propane representing higher value “wet gas”. Low CO2 and some helium content make this gas even more marketable.

With the additional landholdings acquired from Pangaea and EMG added to its existing ground in the east of the basin, Empire straddles strategic gas pipelines and roads that will give it a significant head start in the race for commercialisation. Interestingly, the Federal Government, through its gas-fired recovery strategy and its promised $224 million Beetaloo Strategic Basin Plan is setting out to accelerate gas development and seize the opportunities presented by the natural resources in the Beetaloo.

Empire’s prospects are drill ready and with the appropriate approvals in place, the company is moving forward with roads, civil works and water bores. Civil works for the Carpentaria 2 well pad and access roads are well advanced and drilling of water bores is complete. All preparations for the next stage of drilling leading to gas development are underway. The company says it expects drilling operations at Carpentaria 2H to commence in late October once final approvals are in hand. Once Carpentaria 2 penetrates the target Velkerri Formation, the vertical hole will be plugged back so the 2H horizontal section can be drilled and stimulated followed by an extended production test early in the 2022 dry season.

With the necessary technical data collected from Carpentaria 2H Empire will be in a position to commission an independent resource assessment and material upgrade of contingent resources in permit EP187. The company is in advanced negotiations in the selection of a drilling contractor and acquisition of long-lead items has commenced.

Civil construction and drilling of Carpentaria 2H are budgeted for $11.5 million with 25 per cent of that amount potentially reimbursable under the grant scheme according to the company.

Management expects the final approvals for drilling and stimulation to be given within weeks and is proposing to drill and stimulate up to seven gas exploration wells after receiving an initial offer of $21 million from the Federal Government to accelerate work under the Gas-fired recovery strategy. According to the Prime Minister of Australia, Scott Morrison, “Gas will help re‑establish a strong economy as part of the Government’s JobMaker plan, making energy affordable for families and businesses and supporting jobs as part of Australia’s recovery from the COVID-19 recession.”

The government believes that development in the Beetaloo could produce 6,000 jobs by 2040 and increase economic activity between $18 billion and $36.5 billion over the same time period.

Federal funding will support the drilling and flow testing of up to three hydraulically stimulated horizontal wells, additional seismic data and other associated costs, all in Empire’s EP187 tenement located 85km southwest of Borroloola in the upper reaches of the McArthur River west of the Tablelands Highway. The Carpentaria Highway cuts east to west through the permit. The Northern Territory Government is presently considering Empire’s Environment Management Plan for infill 2D seismic and the drilling of up to seven horizontal wells on EP187.

According to the company, the resource concentration in the Velkerri shale of the Beetaloo is equal to the Marcellus shale in Pennsylvania and upstate New York. Empire knows a bit about the Marcellus too as its US subsidiary, Empire Energy Exploration and Production, operates wells in that highly productive formation. Like the Marcellus, the Velkerri has all of the hallmarks of a world class resource play including consistent thickness over three hundred kilometres across the basin, high total organic carbon and an excellent storage capacity for in place gas and high natural gas concentrations.

According to the company, the Velkerri will deliver gas due to its favourable mineralogy and rock properties, the above average geopressure and good to excellent shale permeability. The Velkerri shale is charged with a liquids-rich gas providing an economic kicker on development. The total potential prospective resource in the Velkerri B shale unit alone is estimated by Geoscience Australia to hold between 50 and 100 trillion cubic feet of gas assuming only 10-20 per cent recovery of the estimated 500 Tcf gas-in-place. Geoscience Australia is the Federal government’s pre-eminent earth science organisation.

Empire has a full book of opportunities on its plate in the Beetaloo and the hulking presence of Santos and Origin across the horizon speaks volumes for its prospectivity.

With a solid resource base, an abundance of infrastructure in the region and a massive oil and gas basin that is racing its way to commercialisation, Empire’s key risk now pretty much comes down to execution – although with its US wells already spitting out cash, this isn’t Empire’s first rodeo – a comforting thought in a new frontier.