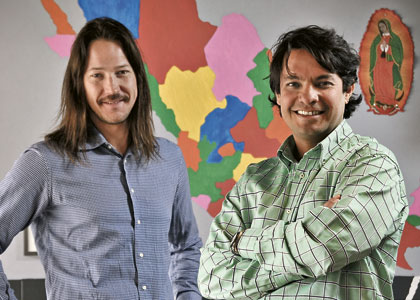 CENTRAL Northbridge is a far cry from coastal Mexico, but that hasn’t stopped Gianni Monti and Israel Ochoa from doing their best to recreate it.

The pair has added to Perth’s growing list of Mexican restaurants with their El Compa venture on Lake Street.

The pair met last year while working at another Mexican restaurant, La Cholita, which is only a stone’s throw away on William Street; Mr Monti was managing the business when Mr Ochoa came in looking for a job.

Both are trained chefs and Mr Ochoa is part-owner of a European-inspired restaurant in Canberra. Mr Monti was part of the team behind Perth’s successful Star Anise restaurant.

They each had plans to open their own restaurant in Perth, but say they needed the other’s skills to make it a reality.

Now, two months after El Compa opened its doors, Mr Monti takes responsibility for the accounting side of the business while Mr Ochoa plays more of a hands-on role, skills that came in handy in transforming the former Lake Street Café site into the unpretentious Mexican bar and dining atmosphere of El Compa.

Mr Monti says the decision to open a restaurant so close to rival La Cholita should be seen as a positive rather than a threat.

Setting them apart from many competitors is the fact Messrs Monti and Ochoa are both Mexican, and is part of the reason why they’re on a mission to change Australia’s perception of Mexican food.

“We don’t even have nachos or burritos on the menu,” Mr Ochoa says.

“If people come in wanting a big plate of nachos, then we tell them to go somewhere else because that’s not what we do here at El Compa.”

Mr Monti says authentic Mexican food is incredibly varied and based on the premise that you share a number of dishes in a relaxed way among friends.

Neither is the pair concerned that the current level of interest in Mexican food may stall; the menu has been kept relatively simple, with quesadillas and tacos, to avoid overwhelming customers.

Mr Monti says it’s only about 20 per cent of what he and Mr Ochoa have planned, which they hope will keep customers coming through the door.

The pair also plans to go beyond El Compa simply being a restaurant; about $25,000 has been invested in shipping an industrial tortilla machine from Mexico to bring another arm to the emerging business.

The machine has the capability of producing 12,000 tortillas an hour, which Messrs Monti and Ochoa hope will enable them to become tortilla wholesalers to supermarkets and catering companies in the long term.