Live jazz, soul and blues complement the food and drinks at a new city venue. 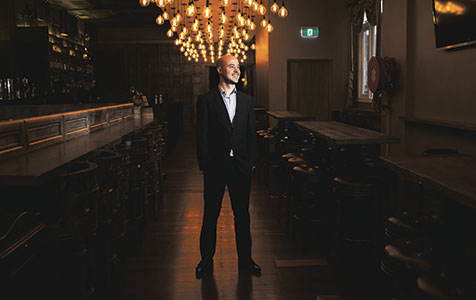 Jazz has found a new home just west of the city centre, with Laneway Lounge’s combination of live music, cocktails and a kitchen that stays open to midnight hitting the right note with a growing clientele.

Its early popularity has prompted the venue’s owners to apply for a licence to extend trading until 2am and add extra seating.

Located off Murray Street and across from Shafto Lane, the newly opened Laneway Lounge is West Perth lawyer Denning Chong’s idea of what an entertainment venue should be.

Mr Chong says he and two friends always had a dream to own their own bar and finally decided to do it after being unable to find a suitable eatery after 9pm one weeknight.

“We love going to bars a lot, but overseas more than here. Why can’t we have what they have, here? Perth deserves it,” Mr Chong told Gusto.

“This is a real passion project, it is all heart and soul. It’s driven by a dream and it’s driven by passion, rather than making the best dollar out of it. And that’s because we’re very emotionally connected to this project and also because we have our own major businesses to handle.”

Mr Chong is a commercial property lawyer and investor in the nearby Tony Roma’s restaurant.

Opening a late-night venue has kept him busy, but has also provided the perfect place to entertain clients (and gain first-hand experience in the approvals process).

“When you go through issues with council and any regulatory issues, you can give more in-depth practical solutions to your clients, rather than just espousing the law.

“You can empathise with your clients a lot better because you know exactly what issues they’re facing and the emotions they’re going through.”

He says the initial idea was to open a smaller bar, but the owners soon realised they needed to broaden the scale if the business was to be successful.

“We wanted a really small, intimate bar, but the economics suggested that for us to have a live jazz area, to be able to keep that as a viable long-term project, we needed to have something that pays it and, ergo, we got the rest of the bar,” Mr Chong says.

The Laneway Lounge is divided into three areas – the live entertainment venue with tables and seating at the back, a bar area with tall tables, stools and standing space, and a relaxed front area with lounge chairs and private booths, which can be curtained off.

International mixologist Grant Collins has created a long list of cocktails to go with an extensive range of spirits and other drinks, which take centre stage over the smaller food menu.

And in a ‘tip of the hat’ to its musical offering, Laneway Lounge has been adopted by the Perth Jazz Club as its Tuesday night home, charging $10-15 per head on performance nights.

Entry is free from Wednesday to Saturday and live jazz, soul and blues music is on offer from 7.30pm to 9.30pm.

Mr Chong says it took a while to find the right premises, which he wanted to have an unassuming entrance and be near other bars and restaurants.

Laneway Lounge opened two months ago, but Mr Chong is already planning to change some of the seating in the bar and live entertainment area to accommodate bigger numbers.

“There is luckily a very high demand. It seems that a lot of people have taken to this place and embraced it, so we’re changing some of the furniture,” Mr Chong says.

“We didn’t anticipate such a fantastic response. I’m quite happy to reinvest into the business.

“What’s surprised me is, a lot of people say ‘this is very Melbourne, this reminds me of Melbourne’.

“It’s not. If you haven’t experienced it yet, it’s very Perth. No-one’s actually done it but it’s what people (in Perth) are happy to go to and really love. I say it’s what Perth should have had five years ago and where Perth is definitely at now.”