East side next in line as city matures

Perth’s small bar revolution is expected to extend into the east end of the CBD, driven by a wave of major commercial and hotel developments. 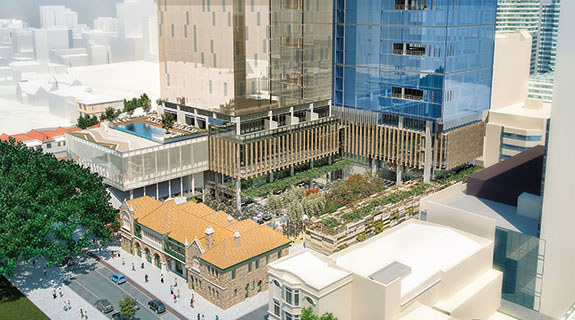 Perth’s small bar revolution is expected to extend into the east end of the CBD, driven by a wave of major commercial and hotel developments.

Another major opportunity beckons for small bar operators in the city, with two luxury hotel developments and a pair of significant commercial projects on the eastern side of Barrack Street to breathe new life into the forgotten end of the CBD.

Collectively, the projects are worth more than $1 billion, with the two hotel developments – FJM Property’s The State Buildings and BGC Development’s Westin Perth – expected to raise the bar for Perth luxury hotel offerings.

Construction is expected to be completed at The State Buildings before mid-year, and a development application is awaiting approval for the $500 million Westin project, following the completion of demolition works of the brutalist-style FESA House at 480 Hay Street.

The State Buildings are part of $580 million worth of projects at the Cathedral + Treasury precinct, which also include a 33-storey, 30,000-square metre office tower anchor-tenanted by the state government (being developed and built by Mirvac Group), and a $55 million library for the City of Perth.

Also in the vicinity is Golden Square, a $100 million redevelopment of the May Holman Centre by Golden Group, which will provide 15,000sqm of office space, the majority to be taken up by Legal Aid.

But it is the flow-on effects of the developments, namely the injection of thousands of workers and hundreds of tourists, which are expected to create significant opportunities in the surrounding precinct, for small bar operators in particular.

BGC Development general manager Ross Catalano said the company’s preliminary study of the area when evaluating the Westin project revealed around 75 per cent of Perth’s hotels were in close proximity, while most of the city’s high-density residential buildings were also close.

But Mr Catalano said there was a dearth of options for those tourists and residents to eat or drink, which led to a significant focus on food and beverage amenity at the Westin proposal.

“Securing the five-star Westin Hotel brand is step change for Perth and brings significant global profile,” Mr Catalano said. “What we’ve been conscious to do is design the retail, food and beverage into the precinct’s public spaces so it is visible, alive and welcoming to hotel guests and, importantly, locals.

“This has meant moving away from the traditional hotel model with internal corporatized restaurants, into a more bespoke offer that reflects our local personality and engages with people.”

Mr Catalano said the food and beverage offering at Westin Perth would be five-star quality, with a two-level restaurant in the historic Hibernian Hall, and three levels of shops, restaurants and bars with rooftop gardens facing Irwin Street.

“Perth has grown up a lot in the last five years – local people are becoming more discerning and there are more international and interstate visitors – so our challenge is to respond to this and take the city experience to the next level,” he said.

BGC’s study also found the surrounding precinct has the largest concentration of heritage buildings in the centre of Perth, many of which are currently underutilised.

That heritage factor provides a significant opportunity for hospitality operators, according to Small Bar Association of WA president Tim Brown.

“Rooms with character are always a bonus when you’re designing something,” Mr Brown said.

“There are places with incredible amounts of character and the city is just starting to discover them.”

Mr Brown said all new development in the city provided a boost for the small bar scene.

“And small bars are exactly the sort of things that work for tourists.

“You want to be able to get out of your hotel and see what the city has to offer, because hotels can be a bit of a bubble, and that boutique product that small bars can offer can give you a real good picture of what the city is about.”