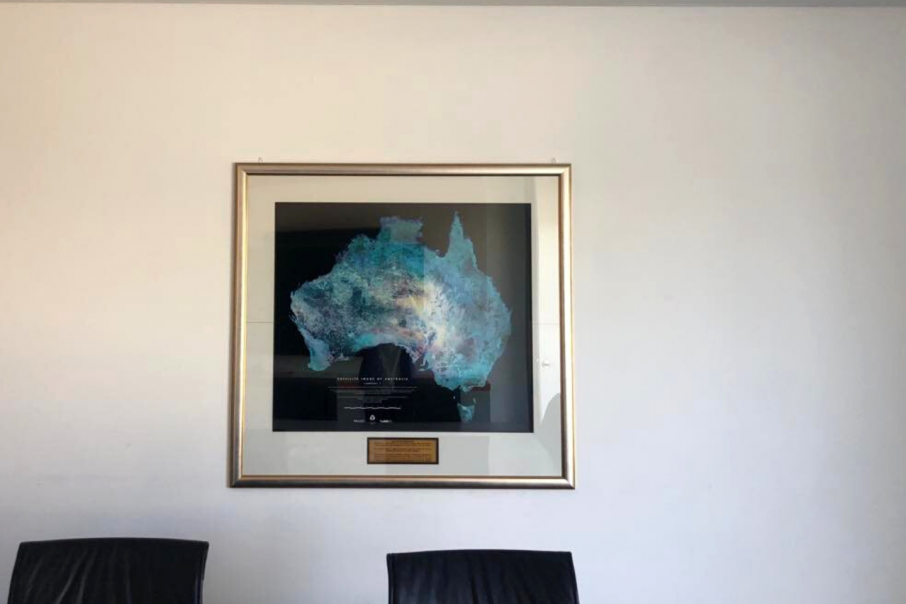 To celebrate Earth day, I want to provide a simple explanation to our business community here in Western Australia about the power of Earth Observation. There is enormous focus on developing a space industry in Australia and the capabilities that go with it, and the benefits from Earth Observation are part of this. The question is how can you benefit from it?

In the boardroom at NGIS hangs a satellite image of Australia. It is a washed-out blue colour, speckled with the indistinguishable reds of our deserts, and a typical picture that you might see in many places online or on a wall. Few know the great significance that it represents.

In 2001 NGIS was involved in helping the Federal Government establish a national carbon accounting system. This project over two years resulted in producing what is thought to be the first-ever seamless satellite image of a continent. The plaque on the frame states “...the Herculean task involved processing satellite imagery from 1972 to 2000 in 11 time slices over the entire continent. At 25m resolution, this is an incredible amount of data and has been recognised by scientists at NASA as one of the most comprehensive projects of this type ever attempted.”

Today, the creation of this type of Earth Observation (EO) product happens daily for the whole globe and is now made freely available to us all in products like Google Maps. That progress over 20 years is truly remarkable.

So, what is Earth Observation? The use of EO data is an important part of the economy today. A recent taskforce described EO as“measurements and data to monitor and examine our planet, it’s environments, human activities and infrastructure via remote sensing technologies on satellites in space and other terrestrial objects.”

And space is not a new thing in this country. Our First Nations people have been using space to tell stories and map the living landscape of Australia for 65,000 years. For our traditional owners, space wasn’t something that was “up there”. Space was considered part of the living universe with a direct relationship between space and the earth. It’s fair to say our First Nations people were the first users of what space provides to sustainably look after the lands they are custodians of.

You may be asking - what can space and EO technology provide me? Imagine you could have eyes on every asset, project, or piece of land you own or look after? Whether you are a farmer, a miner, a first responder, an academic, or a government regulator, you could have up-to-date information on whatever you were interested in, wherever you are, and whenever you wanted. The increased intelligence, the enhanced operational control, and enormous efficiency and productivity gains for every organisation and worker is enormous.

The EO sector provides these eyes. This data is an enormous driver for science and economic development around the world and although there are many forms of EO technologies (e.g. drones), the one that gets the most investment is EO from space via the use of satellites. There are currently thousands of operational satellites in orbit and around 40% of these are being used for EO purposes.

EO satellites were traditionally very large pieces of equipment that we could only afford to launch infrequently. These days there are clouds of nanosatellites provided by Planet the size of a shoebox orbiting the earth and taking aerial photography quality images of the earth. Added to this, drones are available to anybody now and provide the ability to capture high resolution and specific data of the earth at any time and cloud technology has meant this data can now be stored, retrieved, and processed in ways that were impossible only a decade ago.

And the cloud technology providers themselves are now recognizing how important the EO sector is. Back in 2010 at an International Climate Change Conference in Mexico, Google announced its Earth Engine product had been launched. Until last year, Google Earth Engine was only available for academic purposes but it is now available for commercial use. It allows any government or business to have access at a relatively low cost to an enormous amount of global EO data.

The EO technology sector is undergoing a revolution in this country. The global space race is back on, but instead of a race to land on the moon, it’s a race for data on every aspect of our planet to help a myriad of users. In Australia, we have set up the Australian Space Agency and the Federal Government is investing $700M in the civil space sector to grow the sector to $12 Billion and create 20,000 new jobs in the space industry by 2030.

Why is this investment being made? Quite simply, it is data that is the new currency of economic development and overall productivity, and Australia needs to be part of it. Looking forward I would expect the use of EO technology will become more commonplace in an Australian context.

Why is it important to WA? Our businesses operate in some of the most remote and harsh locations on the planet. With the influences of COVID, the need for remote working, increasing fuel costs and pressures to tighten up supply chains, the ability for “eyes in the sky” to provide early warning on any facet of your operation is not only smart and highly efficient, but almost essential. The concept of remote operational control and the use of EO technology has been defined and refined by our own mining companies, and is now considered world-class.

EO technology makes remote operational control available to every organisation. It is available to you right now. The question is – are you taking advantage of it?

Reach out to us at NGIS if you would like to discuss how we can help your business use Earth Observation to solve your business problems.