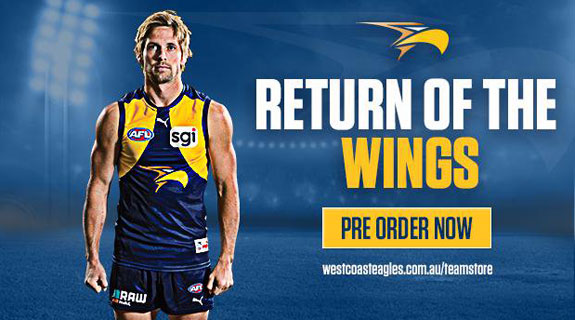 A screenshot of the Eagles guernsey with the sgi logo from their team store website earlier this year.

SGIO has dropped plans to rebrand as sgi, forcing AFL club West Coast Eagles to recall merchandise adorned with a new sponsor’s logo and replace it with shirts and guernseys featuring the insurance agency’s traditional branding.

SGIO’s parent company, IAG, registered a new trademark for sgi in May last year, featuring the tagline ‘Suprisingly Good Insurance’, while a new lower-case logo was trademarked in October.

The Eagles’ first run of 2016 guernseys and training apparel featured the new logo, but today the club announced it would be taking the field with the traditional SGIO wordmark it has worn for the last 30 years.

The club has offered fans the opportunity to swap any merchandise bought with the sgi brand for SGIO-branded products at its team store in Subiaco.

Business News understands IAG changed its mind on the rebrand in order to maintain the significant goodwill that had been built by the SGIO brand since its inception in WA in 1926.

SGIO was previously known as State Government Insurance Office and was privatised by the Court government in 1994.

IAG underwent a major rebrand itself in November last year, also changing its logo to lower-case and adopting a new colour scheme.