Perth’s five-star Duxton Hotel is focusing on tradition and affordability in its new Firewater Grille Restaurant. 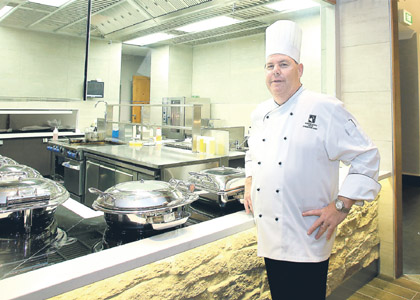 Perth’s five-star Duxton Hotel is focusing on tradition and affordability in its new Firewater Grille Restaurant.

AFFORDABLE isn’t an adjective often associated with the offerings at Perth’s high-end restaurants - especially those located in one of the city’s five-star hotels.

As far as Duxton Hotel general manager Bruce Doig is concerned, however, that’s a perception that needs to be adjusted.

“Perth’s become a very expensive place to dine; what I’m really quite tired of is getting a steak for $47 and then it costing $15 for vegetables, another $10 for potatoes and so forth - it’s got to stop,” Mr Doig told Gusto.

“There is a good element of over-pricing and ridiculous charging for items.

“I get really frustrated and I just refuse to go and do that now, people are tired of it. Here, you order a main course you get a main course,” Mr Doig says of the Duxton’s new Firewater Grille restaurant.

After just a six-week build, the new $3.5 million restaurant officially opened this week.

Structurally the most significant change from the previous restaurant - The Grill -has been a relocation of the main kitchen into the centre of the restaurant, where it is now a ‘show’ kitchen and feature of the dining experience.

Driving the change was growing diner interest in the food preparation process, thanks to shows like My Kitchen Rules and Masterchef; but Mr Doig says it’s also improved the restaurant’s efficiency.

“The hotel had grown in infrastructure to service our guests (but) we still had a small kitchen out the back that serviced the restaurant and room service all out of the same kitchen - we couldn’t cope,” he says.

“We couldn’t service the guests and we were getting complaints, so part of the design was to bring the kitchen to the people for efficiency.”

That efficiency has certainly been achieved with executive chef Aaron Burrows having to actually slow his team’s work rate down - it’s also enabled staff numbers to be trimmed; saving the restaurant on labour costs.

Operating costs have also been reduced front-of-house through simple decisions such as doing away with table linen - Mr Doig opted to instead have tables with leather inserts.

But that’s not to suggest the new restaurant has scrimped on extras; Mr Doig travelled to Shanghai to source the custom-made tables and waited four months for crockery to be shipped from Germany.

The restaurant will continue to cater to its traditional corporate clients and hotel guests, but sales and marketing director Wendy Strohmayer says it’s hoping to pick up more custom from the local market.

For the first time The Duxton has tapped into the potential of social media to run competitions and raise the profile of its restaurant, while also creating its own dedicated website.

“We’re very mindful that when people think of going out for dinner they go looking for a restaurant; we want people to think outside the square and think of the Firewater Grille as a restaurant to come for dinner, that just happens to be at the Duxton,” Ms Strohmayer says.

“We don’t want people to think that they can’t come here if they’re not hotel guests, I think you can become forgotten when people are searching for a restaurant to take their partner, and that was the reason for giving it its own identity with a strong link back to the Duxton.”

The Firewater has some tough competition from other restaurants in central Perth, but Mr Doig is eager for the challenge.

“Restaurants have got to go to a new level in Perth and we’re setting the benchmark -the city is on the move,” he says.

“You go to certain restaurants and there’s no carpet on the floors, they’re noisy, you can’t hear yourself talk to each other and all these sorts of things.

“The key difference is we’re focusing on Western Australian produce, all our meat comes from here,” Mr Burrows says.

“All the other mainstream restaurants aren’t really using a lot of WA beef; they’re using a lot of eastern states beef. All our fish, venison, game - all that is from Western Australia and there’s not enough of that being done in Perth.”