Despite good prices for wheat and barley, poor rainfall and late frosts in some growing areas signals more tough times on WA farms. 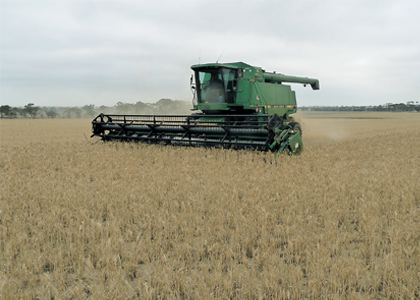 MIXED RESULT: Harvest returns for the 2012-13 season are expected to be about 6mt down on the 15mt handled by CBH in 2011. On the upside, prices for wheat and barley are markedly higher.

Despite good prices for wheat and barley, poor rainfall and late frosts in some growing areas signals more tough times on WA farms.

BELOW-AVERAGE rainfall in July and August and considerable frost in the eastern Wheatbelt will most likely result in a below average grain harvest for 2012-2013.

This will place considerable stress on the viability of smaller, capital-intensive farms, particularly in the central eastern Wheatbelt.

The present estimate by Cooperative Bulk Handling for the current year grain harvest of between 8.5 million tonnes and 9.3mt is well below the 15mt handled by CBH in the 2011-12 year.

CBH reports to November 26 show that 4.7mt of this season’s estimated crop has been received at the four regional centres of Albany, Esperance, Geraldton and Kwinana.

For some farmers the 2012 harvest was a catch-up season from the year before, when some did not plant their normal grain quota.

Irrespective, the current season has not provided an adequate return on farm investment and costs, and places considerable stress on farmer-banker relationships when it comes to funding next year’s grain crop.

Wheat and barley prices (accounting for more than 80 per cent of grain production) are providing some relief in the current year, with October 2012 prices for wheat of $335/t up $50/t on the previous year; current barley prices of $290/t are $84 up on 2011.

Of course prices have varied from month to month, and wheat sales are made over the season, so prices received vary considerably depending on when sales are made.

As with the very poor season in 2011, many farmers this year will not recover the considerable cash cost of planting, fertilising, spraying and harvesting the current harvest.

Continued poor returns for the eastern part of the central-eastern Wheatbelt are of concern. Areas east of Narembeen, Hyden, Lake Grace, and Lake Varley and out to Southern Cross had an extremely dry growing season in July and August, and current harvest reports indicate a heavy loss from frosts in early October.

As these are the prime months for providing sub-soil moisture for the growing season, there is little wonder at the below-average crop returns this year in this region.

This is also linked to the likelihood of frosts in early October, which can do major damage to the grain formulation prior to ripening.

An interesting sidelight to current high wheat prices is to compare our season and farm incomes to those in the US. Despite a prolonged drought in parts of the US and consequent poor crop returns, farm incomes could jump 7 per cent.

In Australia, insurance can only be taken out against hail damage, for example, but not against a crop income or season performance.

This result may once again raise the debate on introducing in Australia a ‘multi peril’ insurance policy.

Such a policy is available in the US, Canada and India, and growing in usage in the EU, Mexico, China and Brazil. These policies cover such areas as floods, drought, hail, fire, windstorm and frost.

Multi-peril policies have been reviewed in Australia on a number of occasions, and were introduced by CBH Mutual, but were withdrawn after one season due to a poor take-up. Unlike all of the other countries with multiperil policies, there is no government subsidy in Australia.

It is apparent that such crop policies are simply not viable without significant and ongoing government support.

While only anecdotal at this stage, there is growing pressure by banks against further lending into the 2013-14 season, particularly the poor performing marginal farms in the eastern Wheatbelt.

I do not necessarily expect a sudden exodus of farmers, but the position is ripe for further aggregation of these farms.

The simple economics of larger farms allowing larger paddocks, and a lower capital outlay per hectare farmed, dictates some form of rationalisation into the future.

The eastern Wheatbelt has had quite a number of years of poor results and sensible and planned aggregation needs to be pursued.

• Geoff Brayshaw is an accountant and non-executive director at FMG.