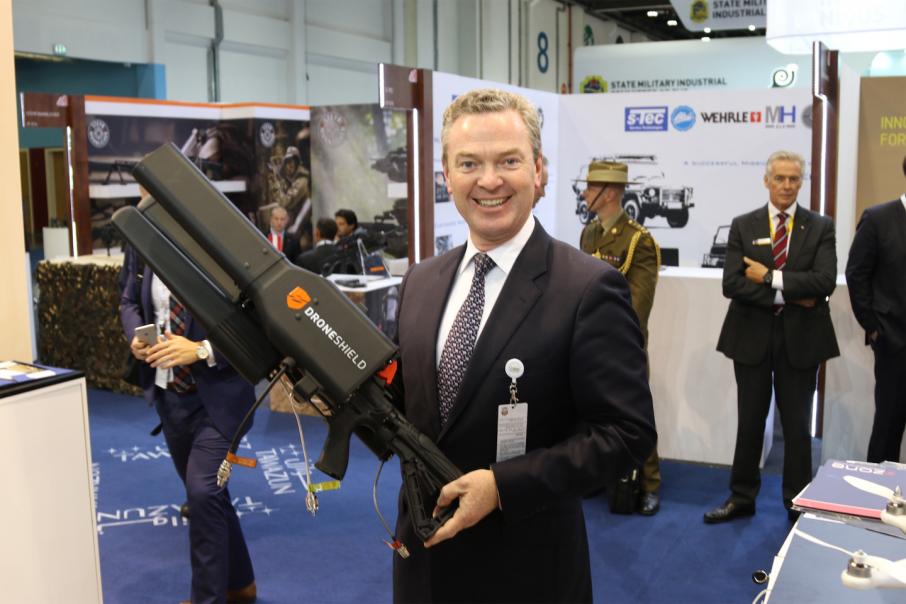 Christopher Pyne, Australian Minister for Defence Industries, with one of DroneShield's products

ASX listed drone-combatting tech company DroneShield has locked down a high profile gig in Queensland for its sci-fi style DroneGun that shoots electromagnetic waves at unwanted aerial intruders in order to disable them or force them to land.

The company said this week that Queensland Police will use several DroneShield DroneGuns to protect the 2018 Commonwealth Games from aerial drone based threats in April this year.

In an announcement to the market this week, the innovative technology company said “Importantly, the deployment of DroneGuns showcases the capability of the domestic Australian defence industry.”

“In protecting the community at the April event, the QPS is able to rely on a product developed by an Australian company, that is dedicated to developing a more substantial relationship with a range of Australian federal and state police and security agencies.”

The company said the Government’s new strategy  was a stimulus for DroneShield to consider future large-scale manufacturing of its products in Australia.

The export policy-initiative will see the creation of a Defence Export Office, which will work hand-in-hand with Austrade and the Centre for Defence Industry Capability to coordinate Government efforts in boosting defence industry manufacturing and exports.

The program will also see the launch of a $3.8 billion Defence Export Facility to help Australian companies get the finance needed to drive sales overseas and to identify new export opportunities.

The  Defence Export Strategy will be topped up with an annual war chest of $20 million to develop and implement export campaigns, $3.2 million to enhance and expand the global supply chain program and $4.1 million to help small and medium companies to compete internationally.

DroneShield said in a market release this week that the development was a “major step forward” for the defence industry in Australia, representing a “levelling of the global playing fields for small and medium sized enterprises”.

Oleg Vornik, DroneShield’s Chief Executive Officer, said, “We are heartened by the considered and focused approach of the Turnbull Government and Minister Pyne in maximising the economic and social benefits of Australia’s growing Defence export industry”.

The Defence export industry contributes $1.5 billion to $2.5 billion a year to Australia’s economy today but it lags compared to its counterparts in other major economies. The Australian economy and standing in the world will benefit substantially from this disruption.”

Most Australian Defence exporters are smaller than foreign competitors and DroneShield has welcomed the strategy as an enabler for Aussie exporters to compete on a more level playing field.

Peter James, DroneShield’s Chairman, said, “These resources will provide the public with a multiplier effect in employment, domestic manufacturing, cash in-flows for the economy, innovation and our domestic ability to defend Australia without relying on others. The Strategy does not appear to have received appropriate levels of media attention. However, it is a major economic, productivity and Defence step for Australia.”

With initial orders for DroneShield’s DroneGun, DroneSentinel and DroneSentry now streaming in, DroneShield said it is in the process of determining the most effective location for larger-scale manufacturing of its products.

“We have a wide range of options on the table, including the United States and Asia, some seemingly more cost-effective than the option of manufacturing our products in Australia would provide. The Strategy gives us the comfort that if we were to bring the manufacture of our products and the associated employment to Australia, we will be making the right decision,” the company said.