ASX listed DroneShield has formed a partnership with Melbourne-based security and surveillance equipment provider Intelligent Security Integration, or “ISI”, to create a new version of a vehicle that boasts an integrated counter-drone detect and defeat solution.

ISI’s flagship Rapid Scout HQ vehicle and its associated Rapid Scout surveillance sensors are designed for use where traditional CCTV cameras have limited or no coverage.

This is achieved using a sophisticated CCTV platform mounted on the roof of a vehicle that provides 360 degree visibility for up to 5km.

Under the partnership, DroneShield will incorporate a counterdrone module containing its RadarZero portable drone detection radar, RfOne, RF direction finder drone detector and possibly its DroneCannon counter-drone jammer into the next version of the Rapid Scout HQ.

Droneshield management believes this will be the first non-military vehicle in the world that is armed with a suite of counter-drone multisensory detect and defeat solutions. The new integrated vehicle will be unveiled in September at Land Forces 2018 in Adelaide, a major Australian-based international defence exhibition.

“There is a considerable interest in the market today for on-vehicle counterdrone products, which Rapid Scout is well placed to meet using DroneShield’s capability.”

Last month, DroneShield received a $3.2m order for 70 of its “DroneGun” products from a major Middle Eastern Ministry of Defence.

DroneGun is a rifle shaped mobile jamming device that uses electromagnetic signals to either force a drone to land or return to its point of origin.

US market research firm, The Insight Partners recently estimated that the video surveillance market will more than double to US$43.8bn by the end of 2025 while the global anti-drone market is projected to climb from USD$329m in 2016 to USD$1.85bn by 2024 according to U.S. based market research and consulting company Grand View Research.

The coming together of these two technologies appears to be perfectly timed and the love child smart vehicle that will be borne of this marriage will no doubt turn a few heads.

Substantial shareholders as published in the annual report.
END_OF_DOCUMENT_TOKEN_TO_BE_REPLACED
Powered by Morningstar ®
Next Articles 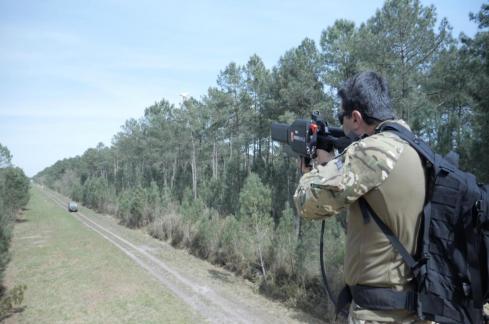