The launch of Western Australia’s first dedicated bourbon distillery has revealed keen interest from investors and consumers in new and fresh concepts. 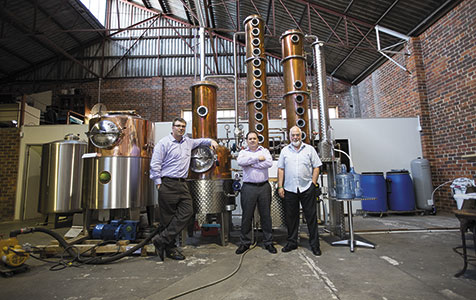 The launch of Western Australia’s first dedicated bourbon distillery has revealed keen interest from investors and consumers in new and fresh concepts.

A year ago the idea for Whipper Snapper distillery was confined to a prospectus being circulated to potential investors and a crowd-funding campaign.

Now, the idea has become a reality, with the distillery and cellar door in East Perth opening to the public last month.

Production began in April and demand for the first product – Crazy Uncle Moonshine – is already outstripping what the small team behind Whipper Snapper can supply.

A range of investors has also come on board as a result of a carefully devised capital-raising strategy.

The team is about two thirds of the way through its second capital-raising round, which is intended to bring in about $600,000 from sophisticated and institutional investors.

One of the company’s directors, Nick Hollens, said the opportunity to invest in Whipper Snapper was increasingly appealing to the Perth market, partly because of the downturn in the resources sector, but also because of the whiskey renaissance globally.

“The industry is hitting record levels, they’re building distilleries in Scotland, which are the first in the UK for 50 years, and the whole demographics of people drinking the product have changed,” Mr Hollens said.

“Interest rates are low so people aren’t putting money in the bank, Perth’s typical mining stocks are pretty down at the moment, so people who have got some money (are prepared to) have a punt, and this industry will be profitable.”

Mr Malloch, the chief manager of operations, said the team had thought carefully about how to go about approaching investors and decided to start small by requesting investments of up to $30,000.

“We realised that because we’re outside of the investment range of a lot of people, with most investing in what they know, we deliberately decided to focus on smaller investments at the start,” Mr Malloch said.

“What that meant was that we were able to get through our first round and move into a safer risk category for investors.

“Once you’ve got a physical presence and you’re producing product, which you’re taking to market, there’s a lot less risk.

“So now with our second round we’re starting to focus on getting the types of people that are going to help us get to where we want to go.”

The current capital raising will be used to expand the production facility and add new equipment to enable the team to create single-malt whiskey.

Following that the team expects to undertake a further capital-raising round next year to raise up to $1 million to fund overheads and the continuation of production as sales increase.

Sales are already proving impressive, as Mr Malloch said partnerships with distributors both in Western Australia and on the east coast were lucrative.

Mr Malloch said most of Perth’s CBD bars were stocking the Moonshine product and distribution was starting over east, interest which was expected to increase when Whipper Snapper released its first run of bourbon whiskey in about 18 months to two years’ time.

Conversations were also being had with distributors in Canada, America and New Zealand while the Asian markets were more of a longer-term goal.

“We can’t produce fast enough to supply those people who are buying at the moment,” Mr Malloch said.

Releasing the Moonshine product was a way for the company to bring in revenue while biding time until the aged products were ready for release.

In a similar strategy, the company has also begun running educational events and tours of the facility.

Mr Malloch said that around the end of this year the distillery would have about 25,000 to 30,000 litres of whiskey in production.