Free to read: WA will be relying on strong export industries to keep its economy afloat, with domestic industries employing a total of 250,000 Western Australians having closed or severely reduced operations due to COVID-19. 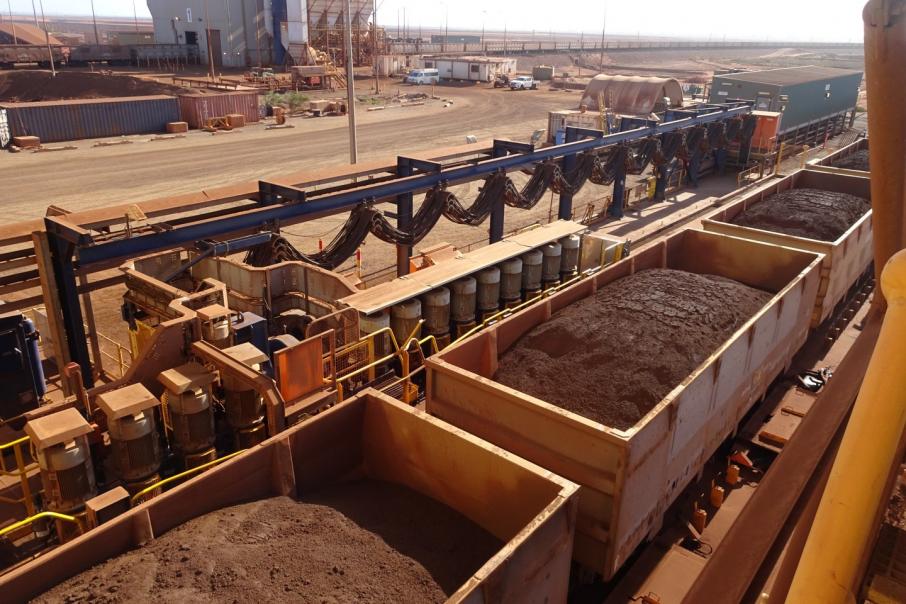 The iron ore price has remained above $US85 per tonne for much of 2020. Photo: Gabriel Oliveira

WA will be relying on strong export industries to keep its economy afloat as large parts of the services sector are shut down or put under restrictions.

The state’s strong export power could prove critical as the COVID-19 health crisis subsumes the economy, with industries employing a total of 250,000 Western Australians having closed or severely reduced operations.

The response of governments to the pandemic has escalated dramatically in recent weeks, with Australians asked to implement social distancing and isolation as key mechanisms to reduce the spread of the virus and limit pressure on the healthcare system.

The hospitality industry is in virtual shutdown, with venues now only able to sell takeaway or through home delivery.

To put that into perspective, 93,600 Western Australians work in the accommodation and food services industry, according to the Australian Bureau of Statistics’ February update.

It is unclear at this early stage how many people will be stood down, lose jobs outright, lose shifts or continue working.

About 22,700 people work in arts and recreation in WA, ABS data for February shows, while 137,200 are employed in retail trade, parts of which are shutting down.

The Westpac Consumer Sentiment Index fell 3.8 per cent to be 91.9 in March, the lowest level in five years.

That was before the big shutdowns.

Roy Morgan data showed consumer confidence fell 27.8 per cent in a single week to be 72.2 points, the lowest level since 1990 and about 17 per cent below the lowest point seen in the GFC.

With the crash in confidence and strict social distancing rules, the businesses most heavily affected will include those focused on discretionary spending, and those that involve social interactions.

Other industries could be affected by uncertainty across the economy, with construction a good example.

In the December quarter, Western Australians spent $1.9 billion building and altering houses, while businesses spent $4.3 billion on projects, according to ABS data.

Consumption categories likely to be worst affected are shown in the graphic above, with recreation and culture the biggest, worth $2.4 billion in the December quarter.

Hotels, cafes and restaurants ($1.8 billion) will be significantly affected.

Those figures are domestic spending, and so won’t estimate the impact of tourism exports falling to zero while the country’s borders close off.

Other spending categories will be more steady or potentially have significant growth, such as food at $2.9 billion in the December quarter, and healthcare ($2.2 billion).

Supermarket chains Coles and Woolworths have hired staff to deal with a surge in demand for essentials in recent weeks, as shoppers prepare their pantries for lockdowns like those enforced overseas.

Woolworths said demand was currently about double that of an ordinary week, although it would be unlikely to persist for an extended period.

Basics such as electricity and gas, and communications, would also be expected to remain reasonably steady.

The biggest source of potential demand growth in the months ahead is from governments, with recurrent spending and capital works from all levels combined worth $12 billion in the three months to December.

With massive stimulus packages unveiled in recent weeks, spending in the government coloumn will jump. 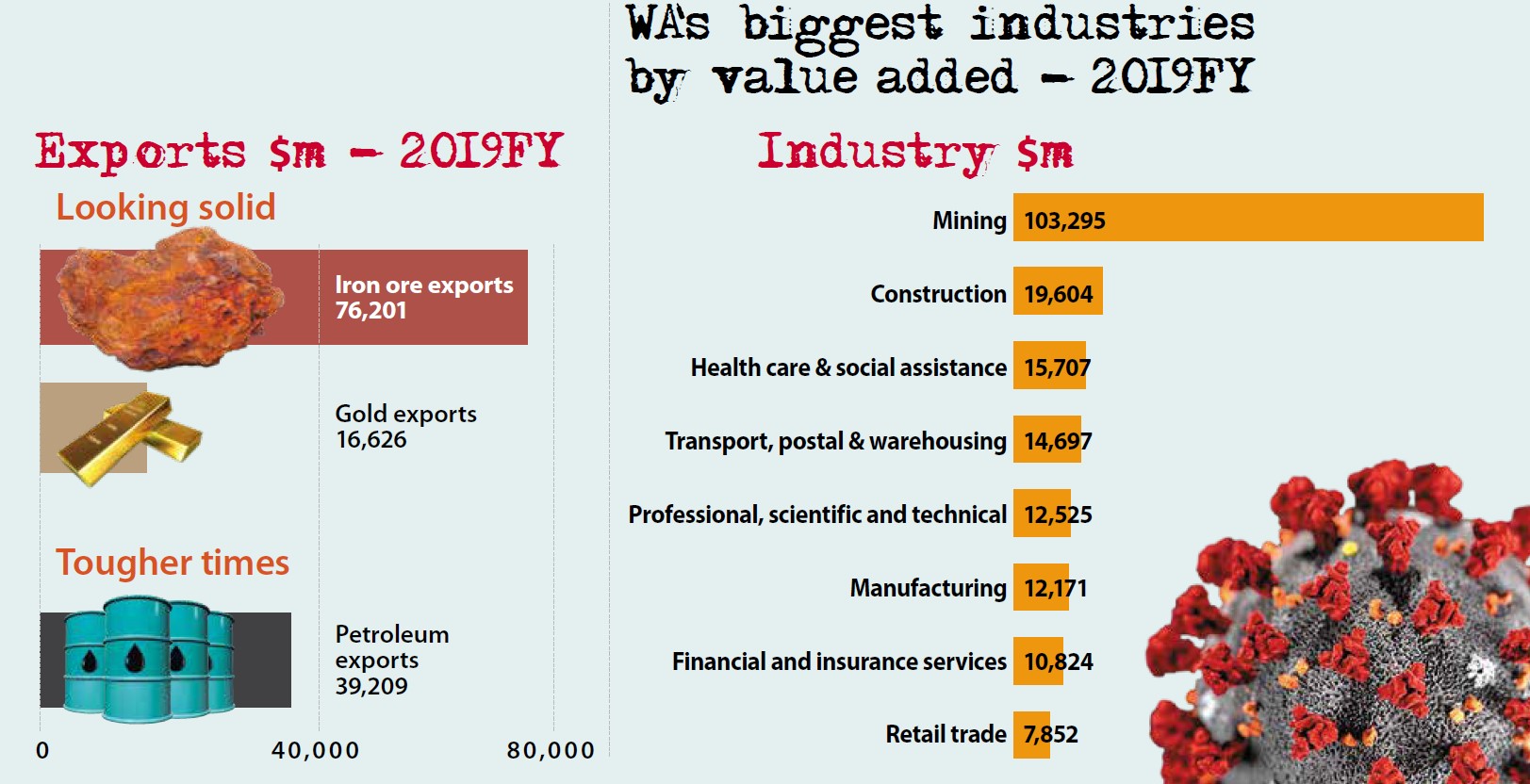 Resources exports are the single biggest contributor to the state’s economy.

Mining generated $100 billion of income in the 2019 financial year, more than 40 per cent of gross state product.

Much will hinge on the continuation of iron ore exports, worth $76 billion in the 2019 financial year.

The iron ore price has remained above $US85 per tonne for much of 2020, despite a lockdown across China that was expected to reduce demand.

As that country gets back to work, demand for WA exports should continue.

Bank of America head of Australian economics Tony Morriss said it was possible WA’s heavy exposure to China might mean it was less affected by the Australian shutdown than other states.

“Every state will be subject to the hit to services,” he said.

“[The] China rebound might make the [WA] situation better than the eastern states.”

Mr Morriss said Australia also would have a buffer through its currency, where a depreciation made local exports more competitive globally.

The Australian dollar has fallen from about US70 cents at the start of the year to be buying about US60 cents at the time of writing.

Mr Morriss said that would mean exporters earned more in Australian dollars for each tonne shipped.

Deutsche Bank economist Phil O’Donaghoe said the emergence of a recovery in China would be encouraging, both for exports and for other countries hoping for a rapid rebound when lockdowns were relaxed.

But he warned there could be a slowdown of export volumes in the June quarter because inventories had surged in recent weeks and would need time to be drawn down.

Petroleum exports are likely to be under pressure, with crude oil prices dropping from more than $US60 per barrel to be below $US28/bbl at the time of writing.

Mr Morriss was reasonably optimistic about the LNG industry, with demand from Asia for gas as a transition fuel likely to remain strong in the medium term.

Woodside Petroleum has recently reduced its non-essential maintenance activities, with the company saying it needed to reduce the number of people on site to stop potential spread of the virus.

A big question will be around the impact of the lower oil price on Woodside’s Scarbrough and Browse LNG projects, worth more than $40 billion combined.

Similarly, social distancing rules would add to the cost and complexity of project construction.

Predictions for the economic impact of the pandemic were dire even before shutdowns had ramped up, with ANZ forecasting a contraction of 2 per cent in the March quarter in Australia.

Some analysts now believe unemployment could exceed 10 per cent.

The federal government and Reserve Bank of Australia have launched a coordinated campaign to ‘build a bridge’ for businesses through six months of uncertainty.

The government’s policies had been targeted to boost private consumption and business investment in the $17.6 billion first round, and then encouraging businesses to keep workers onboard and ease the impact of job losses in the $66.1 billion second round.

A major surprise was the RBA’s commitment to a yield target on three-year government bonds of 0.25 per cent for three years, a big change from the usual policy of directly targeting the overnight cash market.

The move will give the central bank greater ability to keep borrowing costs low across the economy.

“We are prepared to transact in whatever quantity is needed to meet this (yield) target.” RBA governor Philip Lowe said.

Bank of America’s Mr Morriss said there was only one other major central bank using a yield curve target, with most pledging quantitative targets instead.

“I was really surprised they did that,” he said.

“It does run some risks.

“Imagine if this crisis is over and all of a sudden you get an inflation break out ... [the RBA] may need to buy a huge amount of bonds.”

But inflation would be a problem the bank would love to have at this point, he said.

“That prospect is down the road … their message is they’ll do anything,” Mr Morriss said.

Deutsche Bank’s Mr O’Donaghoe said there was great uncertainty from an economic perspective.

He said the stimulus packages would help, although it was too early to tell if the amount was sufficient.

One issue would be around the lending facilities and loan guarantees, which were intended to support loans for small and medium-size businesses.

“If you’re an SME and you’re seeing your revenue falling to zero … are you going to borrow?” Mr O’Donaghoe said.

But he praised the RBA’s yield target, which would have a greater impact on interest rates across the economy than simply changing the cash rate.

Mr O’Donaghoe said the federal government package was less reliant on cash handouts than had been the case during the GFC, and the tilt to ensure smaller businesses retained staff made sense.

“The trouble with helicopter money (the cash hand outs), if we’re all stuck at home, how do we spend it?” he said.

After this story went to print, the federal government announced a $130 billion wage subsidy policy, click here to learn more.

The economic pressure is growing across the world, and inspiring phenomenal interventions by governments and central banks.

Bank of America forecast a global recession for 2020, with growth to be just 0.3 per cent across the year, while Deutsche Bank predicted the global economy will grow just 0.8 per cent over the year.

Numbers for the June quarter are astonishing.

Deutsche Bank said US GDP would fall 13 per cent in the three-month period, while the Eurozone would contract 22 per cent.

But the news coming out of China tells a different story, with a big bounce expected post-COVID-19 after the draconian social measures imposed there. While China’s GDP fell 31.7 per cent in the March quarter during the lockdown, it is likely to grow 34 per cent in the three months to June, according to Deutsche Bank.

In the US, the government approved a $US2 trillion support package, reportedly including $US367 billion for small business loans, $1,200 cheques for many citizens and a $US500 billion industry fund.

The US Federal Reserve has also committed to pump trillions into money markets.

In the UK, the government promised to pay 80 per cent of wages for people unable to work, up to £2,500 per month for three months.

It was in addition to £330 billion of loans and guarantees for businesses.