A lobby group argues WA’s central position in the increasingly important Pacific and Indian regions must be key to defence planning. 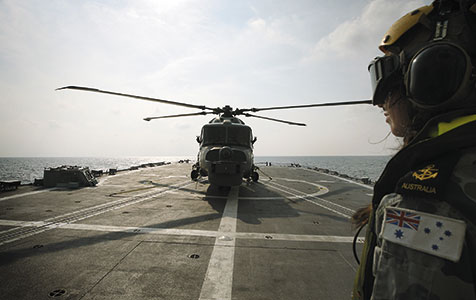 A lobby group argues WA’s central position in the increasingly important Pacific and Indian regions must be key to defence planning.

Canberra is being urged to markedly boost Western Australia’s defence profile because of the state’s proximity to the increasingly contested north-western Indian Ocean and Persian Gulf regions.

The transforming call is made by the Australian Industry Defence Network-WA (AIDN-WA), in its submission to the forthcoming Defence White Paper.

The AIDN-WA is WA’s premier defence sector advocacy group. Its 30 member companies located across metropolitan Perth represent a combined workforce of some 1,500 employees within of a sector employing a 3,000-strong workforce.

Among the AIDN-WA submission’s key points is the proposal to create an Indian Ocean Command (IOCOM) in Perth.

It highlights the fact that the Indian Ocean region remains one of Australia’s, and the world’s, most important maritime transit zones.

Long-forgotten is the fact that wartime Fremantle harbour and environs was designated, Fortress Fremantle, defended by a network of long-range guns, including on Rottnest Island and Mosman Park’s Buckland Hill.

For three years Fortress Fremantle was home for US submarines that were key players in the destruction of imperial Japan’s tanker fleet, which shipped oil from the Dutch East Indies, now Indonesia, to Japan.

They disabled Japan’s wartime economy by denying it adequate oil supplies, which Japan’s 1941-42 push towards Australia and New Zealand was expected to ensure.

More than 90 of the US’s ‘Silent Service’ 250-strong war-time fleet either transited or were based at Fortress Fremantle during 1942-45, meaning the torpedo played as crucial a role in winning the Pacific War as the atomic bomb.

“Today, the rising economies of the Asia Pacific and the Indian Ocean have made the region of greater importance to the world economy, especially with the rise of India,” it says.

“The Indian Ocean is now considered one of the most important and geo-politically contested waterways in the world, with the bulk of world seaborne transport in energy plying its waters travelling to the economies of Europe and the Indo-Pacific.”

The submission argues IOCOM would serve as a tri-service command centre.

It proposes another three key recommendations:

• Relocating to WA a multi-role army brigade and support units. If not feasible “it may be necessary to raise a new multi-role brigade to be stationed on the western seaboard. It does not make strategic sense to have all of Australia’s multi-role combat brigades stationed on the east coast and Darwin, while a third of the country remains without a serious regular army presence”.

• Boosting defence exercises in the north-west’s dedicated training ranges. As WA is more accessible to Indian Ocean powers, the submission notes that Indian Ocean regional powers should “visit WA for bilateral and multilateral exercises and training as a means of strengthening bonds and reducing possible tensions”.

• Providing facilities for docking of Royal Australian Navy and allied amphibious vessels by investing in the expansion of the Australian Marine Complex facilities in Henderson.

“If this relatively modest improvement were made, the RAN would be able to dock any of its ships on the west coast, within an area supported by a mature marine industry and infrastructure,” it says.

The submission was compiled by senior executives heading the AIDN-WA’s prime and sub-contracting member companies.

Its members presently contribute to a sector valued at more than $620 million to the state’s economy, which is growing.

Crucial to the sector is the Defence Department’s supply and acquisition arm, the Defence Materiel Organisation (DMO), which has nearly 300 personnel – 203 civilians and 78 Defence Force staffers – stationed in WA.

“Over 95 per cent of these work in Rockingham, at either Fleet Base West or HMAS Stirling,” a defence spokesperson said.

“The defence industry in Western Australia principally focuses on naval sustainment, with additional work in aerospace sustainment and various more minor activities in fields such as communications, clothing, and information systems.”

Total DMO outlays on sustainment and acquisition expected for WA over 2014-15 to 2017-18 are estimated to reach $2.8 billion, representing over 10 per cent of total DMO materiel expenditure in Australia in those years.

AIDN-WA president Serge DeSilva-Ranasinghe said: “AIDN-WA’s White Paper submission presents a blueprint that builds on the foundations of our Two Ocean Navy and aligns with Australia’s national and regional interests.”

“It will include a costed acquisition program, a 10-year Defence Capability Plan and a new Defence Industry Policy Statement.”