Uranium exploration is undergoing a resurgence as the world grapples with the challenge of feeding a seemingly unending appetite for energy. Against this backdrop, ASX-listed Deep Yellow is sitting on a veritable powerhouse of potentially stored nuclear energy across its portfolio of Namibian uranium projects. The latest drilling results from its Nova JV point to what could be the addition of another significantly mineralised system. 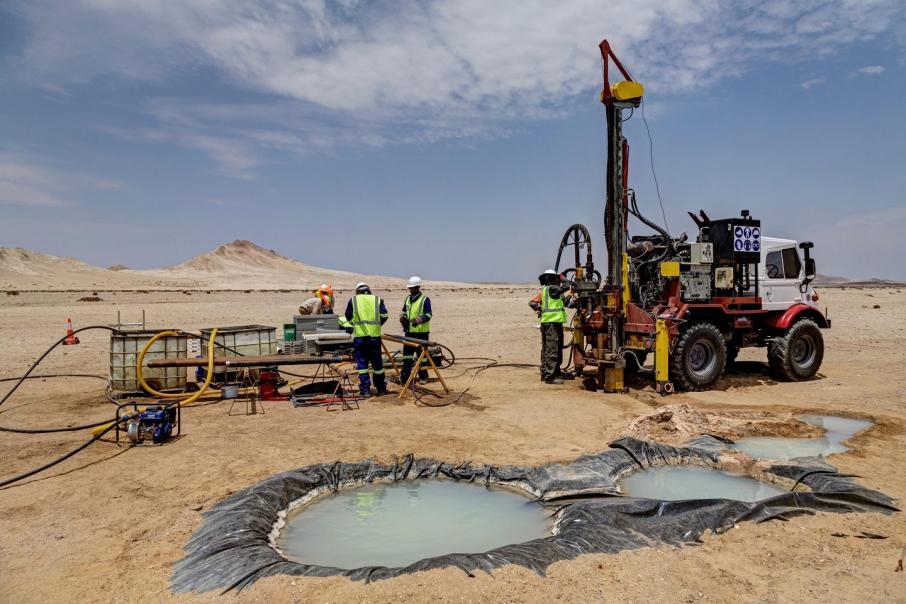 Uranium exploration is undergoing a resurgence as the world grapples with the challenge of feeding a seemingly unending appetite for energy. Against this backdrop, ASX-listed Deep Yellow is sitting on a veritable powerhouse of potentially stored nuclear energy across its portfolio of Namibian uranium projects. The latest drilling results from its Nova JV point to what could be the addition of another significantly mineralised system.

The headline intersection at the prospect returned a cumulative downhole thickness of 44m with a maximum grade of 736 parts per million eU3O8 over 1m. Within this zone is a 24m intercept grading 297ppm eU3O8 from 139 metres downhole.

Other notable results from its Deep Yellow’s Barking Gecko prospect include 10m grading 305ppm eU3O8 from 64m down hole.

The company’s foundation ground is nestled in Namibia’s ‘open for uranium mining’ region just 20km south of the Husab/Rössing uranium ore bodies and 40km southwest of the Langer Heinrich deposit. The region has produced a massive 300 million pounds of yellowcake during the last four decades. Yellowcake is the oxide obtained from the processing of the uranium ore.

The encouraging drilling intercepts to date appear to have left glaring holes in the currently defined mineralised zone - both laterally and at depth - across the Barking Gecko prospect, suggesting there remains significant upside potential.

Deep Yellow has a JV with the Japanese Government’s Japan Oil, Gas and Metals National Corporation, or “JOGMEC” that has committed to a hefty $4.5m spend across the Nova JV over four years to farm into 39.5 per cent of the project, which comprises two exploration permits.

Earlier this year, JOGMEC agreed to fund an exploration program to fulfill the balance of its earn-in obligation, which would mostly focus on the Barking Gecko prospect.

There are two broad ore deposit types that Deep Yellow is focused on finding in Namibia - sandstone hosted, paleochannel related and alaskite, or granite related.

Deep Yellow said the ongoing results from Barking Gecko have upgraded the potential to discover alaskite-type basement deposits, similar to the Rössing and Husab uranium ore bodies that are typically higher grade than paleochannels.

According to the World Nuclear Association, at the end of 2015, Rössing’s proven reserves were 6270 tonnes of U3O8 grading 270ppm and its probable reserves were 33,250 tonnes grading 300ppm U3O8.

Rössing Uranium Ltd was formed in 1970 and uranium from the mine is sold to power utilities in Central Europe, North America and South-East Asia including China.

The World Nuclear Association said that a total resource of 188,000 tonnes averaging about 350ppm uranium was defined as of June 2011 from Husab at a 100ppm cut-off.

Deep Yellow has three other granite-hosted, basement-type prospects - the Ongolo, MS7 and Inca deposits. These deposits are located up to 18km to the east-northeast of Barking Gecko on its 100 per cent owned Reptile project opening the potential for a broader system.

Deep Yellow has set a conceptual Exploration Target within the paleochannel type deposit category of 125Mlb to 150Mlb grading between 300 to 500ppm eU3O8. These numbers would be enough to potentially increase the company’s existing paleochannel resource base by 30 per cent, according to the company.

Deep Yellow’s flagship Tumas pre-feasibility study is nearing completion and it looks to have a definitive strategy now in place to take advantage of increasing world energy demands with uranium demand set to outstrip supply by 20203.