Good Morning, we have a “Super” Tuesday today… No… we’re not talking about the US election.. What is happening? At 2:30pm AEST, we hope that the RBA cuts interest rates to 1.75%.... then the much awaited, federal budget… will the new treasurer cut taxes? This is what we want to see… the question: how do we fund it? 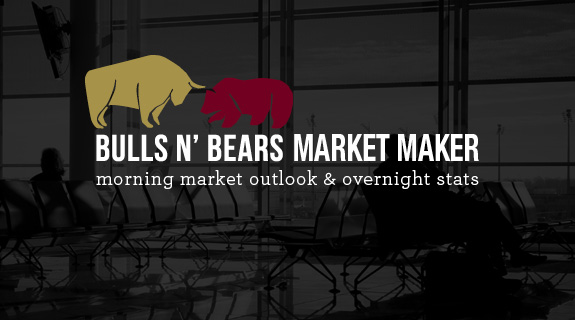 We have a “Super” Tuesday today…

No… we’re not talking about the US election..

*** in breaking news, ANZ has just released ins FY result, with the bank cutting its dividend and profits falling 24%....

Maybe the likelihood of interest rates falling has now increased to 75%?

With Janet Yellen announcing “gradual” interest rate rises in 2016 and the Bank of Japan sitting on their hands, we certainly hope that our good friend, Stevens, lifts his game and gives other central banks something to talk about by cutting interest rates …….

That would be nice.

Then tonight, we have the Federal Budget…

“maybe” some new initiatives for families and young children to assist with the burden of child care?

“maybe” some more spending for schools, roads and hospitals?

But the question…. How will it be funded?

Last night in the US, stocks rallied (Dow +117 points), as Amazon and Berkshire surprised to the upside…

The SPI is up 10 points this morning.

US stocks rose on Monday, rebounding from losses last week, as financials gained with Berkshire Hathaway and weakness in the US dollar eased worries about earnings for multinationals.

After an underwhelming earnings report led to the shares' worst week since January 2013, Apple stock extended its losses to kick off May, closing down 0.1 per cent on Monday. The benchmark index's laggard has declined by nearly 11 per cent so far this year heading into today's session. More than $US79 billion in Apple's market capitalisation has been erased over the past eight sessions.

The Institute for Supply Management (ISM) said its index of national factory activity slipped to 50.8 last month from a reading of 51.8 in March. Despite the fall, April marked the second straight month of expansion and was also the second highest reading in the last eight months.

European stocks were little changed in thin trading as insurers advanced and banks declined, after the Stoxx Europe 600 Index ended last week at its lowest level in more than two weeks.

Allianz led gains on Germany's DAX Index after reporting a 21 per cent jump in quarterly profit. Auto makers climbed, with Fiat Chrysler Automobiles rising 2.1 per cent after chairman Sergio Marchionne said he was more positive on the outlook for China. Italian lenders led banks lower after private investors snubbed an initial public offering by Banca Popolare di Vicenza. Deutsche Bank lost 2.7 per cent after UK regulators were said to have faulted the lender in March for "serious" lapses in efforts to thwart money laundering.

The Stoxx 600 fell 0.1 per cent to 341.24 at the close of trading, after fluctuating between gains and losses. The volume of shares changing hands was 61 per cent below the 30-day average as UK markets were closed for a holiday. The DAX rose 0.8 per cent, for the biggest advance among western-European markets.

HSBC Holdings, BMW and UBS Group are among companies posting earnings this week. With the reporting season well under way, analysts have slashed estimates for the year. They project profit at Stoxx 600 members will slide 2.9 per cent in 2016, before growing at a double-digit pace in each of the next three years.

Local shares are poised to open flat to higher with ANZ's results pending, followed later by the RBA's rate decision and the federal budget.

The market and analysts have "almost evenly split views on the outcome of Tuesday's RBA Board meeting.  A result either way is likely to see market reaction."  NAB's view is that last week's materially lower-than-expected Q1 CPI offers the RBA the opportunity "to add more support to the domestic economy, without risk to their inflation target, even with an economy that continues to reveal resilience in the face of the resources downturn".

The yen's world-beating rally against the dollar looks to be gathering momentum, as central bank inaction on both sides of the Pacific Ocean leaves inflation expectations to drive the exchange rate. Japan's currency extended its climb to an 18-month high Monday after Bank of Japan Governor Haruhiko Kuroda refrained from adding to stimulus on Thursday.

Gold rose to a fresh 15-month peak above $US1300 an ounce on Monday in holiday-thinned trade as an early retreat in the dollar drove prices higher, though it later eased as the US currency pared losses.

Data on Friday showed hedge funds and money managers cut their net long position in COMEX gold futures and options in the week to last Tuesday, when they lifted their bullish silver position to a record high. "We believe that speculative financial investors have been driving the gold price up significantly of late," Commerzbank said in a note. "The same also applies to silver, platinum and palladium."

Australian shares fell back on Monday after a poor earnings result from Westpac weighed on banking stocks, offsetting gains in Telstra and resources stocks.

The market almost rebounded from heavy early losses to record a gain for the day but ultimately the benchmark S&P/ASX200 dropped 0.2 per cent to 5243.0 while the broader All Ordinaries dropped 0.1 per cent to 5312.0.

We are sitting on no open positions and assessing opportunities in the healthcare space.

If you would like more information on either PEAK ACTIVE, PEAK GROWTH or the PEAK INCOME strategies, please don’t hesitate to be in touch.

Have a great day,