Mia Davies invoked the memory of US president Teddy Roosevelt to argue for pragmatic and market-based policy decisions at a Business News Policy Briefing today. 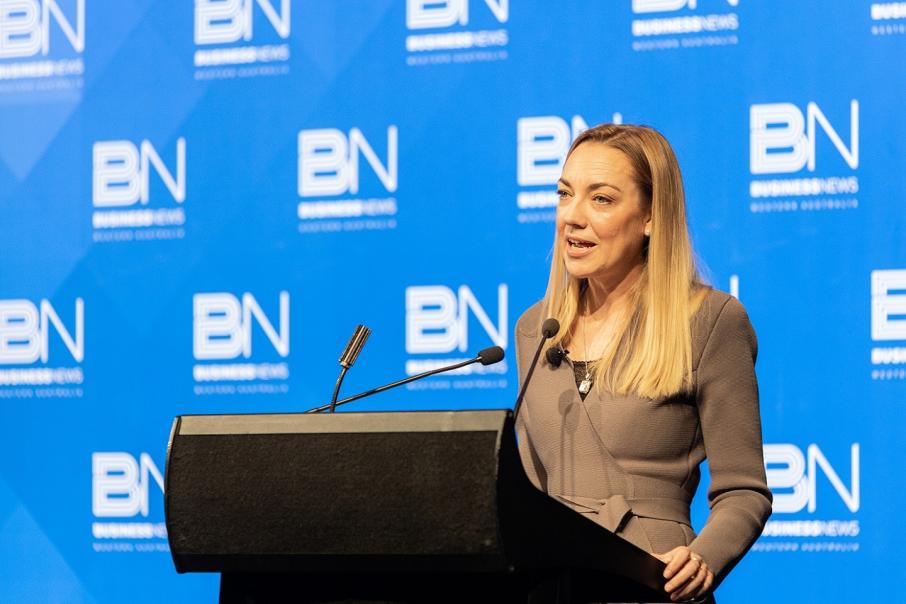 Mia Davies declined to say whether The Nationals WA would support the $5 iron ore levy ahead of the 2021 election. Photo: Gabriel Oliveira

Mia Davies has no shortage of experienced political operatives among her predecessors from whom to draw inspiration in her role as leader of The Nationals WA.

There’s Hendy Cowan, who served as deputy premier for much of the 1990s, or Brendon Grylls, Ms Davies’ predecessor in the seat of Central Wheatbelt who helped implement the state’s Royalties for Regions policy.

However, at the most recent Business News Policy Briefing breakfast forum this morning, Ms Davies made a more curious allusion, invoking the memory of former US president Theodore Roosevelt.

Praising the man credited with leading the US’s progressive movement in the early 1900s, Ms Davies professed admiration for Mr Roosevelt’s efforts to diversify the country’s regional economy, citing the Newlands Reclamation Act of 1902 in which the US government authorised the sale of western land to pay for irrigation channels to flow to arid farming land in western states.

It was an example of the type of policies Ms Davies said the National Party stood for, comparing the Reclamation Act’s efforts to stimulate agricultural growth to Royalties for Regions’ role in the Ord East Kimberley expansion and the Mowanjum irrigation trial.

“Like in Roosevelt’s vision of greening the arid lands in America a century ago, Royalties for Regions brought into clear focus many economic diversification possibilities, including large-scale irrigation across the state,” Ms Davies told the audience at the Hyatt Regency event.

In referencing Roosevelt, Ms Davies cited his leadership as an example of how the state government could best respond to uncertainty in the economy.

“The machinery of government may be large and cumbersome, but we know when it is repeatedly prodded by proactive ministers and premiers, it can be nimble and innovative,” she said.

“It takes persistence and real vision to make sure we’re all moving in the right direction.”

Ms Davies’ emphasis on novel policy decisions came amid troubling signs for both the national and state economies, with the RBA on Tuesday announcing a drop in the cash rate of 25 basis points, bringing interest rates below 1 per cent for the first time in the country’s history.

In referencing stagnant wages growth and house prices across the state, Ms Davies sought to emphasise the role of the state government in stimulating and facilitating business growth.

Acknowledging WA’s reliance on the mining sector and its status as a ‘boom-and-bust’ economy, she said no single policy currently existed to address the concerns of businesses facing the challenges of anaemic growth.

To that end, Ms Davies argued the government had a duty to reduce the bureaucratic burden on business.

“We know the problems associated with red tape and the disincentive of the current payroll tax structure,” she said.

“The Nationals WA has had a longstanding policy on reducing the payroll tax burden on small business.”

Despite arguing for concessions for business, Ms Davies appeared hesitant to align herself wholly with private interests, making a point of emphasising her party’s disagreements with mining companies on royalty concessions and state agreements.

While conceding that mining companies were important to the state’s heartland, calling them the pillar of the regional business community, she expressed concern at the lack of reporting around community spending obligations.

Recognising the dual roles of government to act as both a regulator and a facilitator of business, Ms Davies argued no business should hold capture of government agencies.

“We will always operate without fear or favour,” she said.

“The big miners in our state are important, and they do well for our economy and for themselves.

“We want these companies to do well, we want our state to benefit in the long term, and finding the balance is always the trick for any government and any opposition.”

While Ms Davies told Mr Kennedy the party had since reviewed some of the policy proposals it took to the last election, such as the sale of Western Power, she was non-committal when asked about the proposed $5 iron ore levy, which was intended to meet the revenue shortfall that would have resulted from raising the payroll tax threshold to $5 million.

While the party has since reviewed its stance on payroll tax, supporting raising the threshold to just $1 million, Ms Davies declined to say whether The Nationals WA would scrap the iron ore levy, only saying it would commit to reviewing it ahead of the 2021 election.

“I think what you’ve seen us talk about since we’ve come to opposition is not so much the special lease rental,” she said.

“When we came to the last state election, the state’s finances were not in a good place, and we knew that we needed to have a way of providing an economic pathway going forward.

“We as The Nationals put on the table a revenue source so we could continue growing regional Australia and make sure everyone was contributing how we thought they should.”