Dart gets busy at Victoria copper-gold project with own rig

Victoria-focused explorer Dart Mining is shifting its exploration efforts at the Granite Flat copper-gold project into higher gear. A 1,000m diamond drilling campaign has commenced to follow-up on previous eye-catching hits that include a 3m interval going 41.1 g/t gold as the company also looks to test for a monster copper-gold porphyry body at depth. 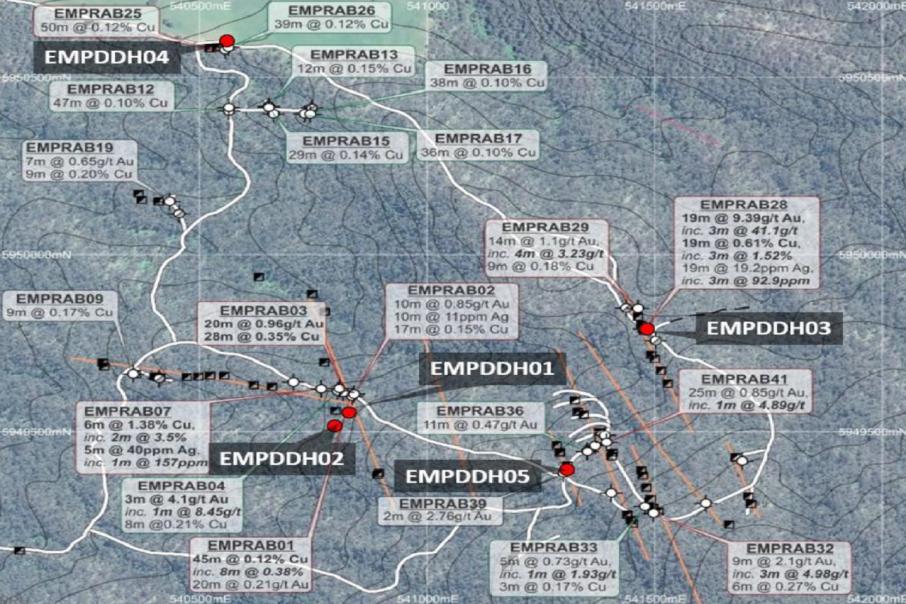 Victoria-focused explorer Dart Mining is shifting its exploration efforts at the Granite Flat copper-gold project into higher gear. A 1,000m diamond drilling campaign has commenced to follow-up on previous eye-catching hits that include a 3m interval going 41.1 g/t gold as the company also looks to test for a monster copper-gold porphyry body at depth.

The holes will be drilled to depths ranging between 80m and 350m with the first hole of the five-hole campaign at Granite Flat under way.

Other significant intercepts from the recent drilling include 20m going 0.96 g/t gold from just 7m, with 28m at 0.35 per cent copper from 7m reported in the same hole.

Mineralisation was picked up over the entire length of seven of the drilled holes, including a broad 50m copper hit going 0.12 per cent copper from surface. The continuous mineralisation adds support to Dart’s belief that a deeper source to the copper-gold system may be present.

Historical work at Granite Flat has delineated a 3km-by-2km surface geochemical copper-gold anomaly and Dart sees that the recent drilling has highlighted the potential for a bulk tonnage porphyry or intrusion-related mineralised system at the project.

Previous drilling at Granite Flats has not exceeded 125m depth, however mineralisation remains open at depth and along strike from the previous drilling.

Two of the five new holes will be drilled to depths of 250m and 350m, respectively, to test for porphyry-style mineralisation at the project.

Large-scale, low-grade porphyry deposits account for the bulk of copper production around the globe.

Exploration over the past 30 years has progressively shown Australia’s eastern Lachlan Fold Belt to be a major copper-gold porphyry province. The belt hosts the Cadia and Ridgeway mines in NSW, operated by mining giant Newcrest Mining, that boast resources of 3.1 billion tonnes at 0.25 per cent copper and 0.36 g/t gold.

In recent times the region has once again been thrown into the spotlight by ASX-listed Alkane Resources’ Boda discovery in NSW. A discovery hole in September 2019 returned a remarkable 502m intercept going 0.48g/t gold and 0.2 per cent copper that subsequently saw Alkane’s share price soar from around 30c to as high as $1.50 by October 2020.

A surge in mineral exploration activity in Australia over the past 12 months has left many exploration companies scrambling to secure rigs for drilling campaigns and Dart’s purchase appears to be a shrewd investment leaving the company in a position of flexibility to drill all year round across its extensive project portfolio in Victoria. The purchased rig can drill to depths of 800m.

It means Dart’s five-hole campaign can be extended at low cost.

Dart has positioned itself to become a prominent name in Victoria’s modern gold rush. Porphyry exploration success would give it a significant point of difference.