Curveballs can be a positive

Western Australian Kate Leeming recently embarked on a cycling expedition through the Andes in South America, but the pandemic cut this short and she had to make a mad scramble to get out of Bolivia before the borders were shut. Here’s her story: 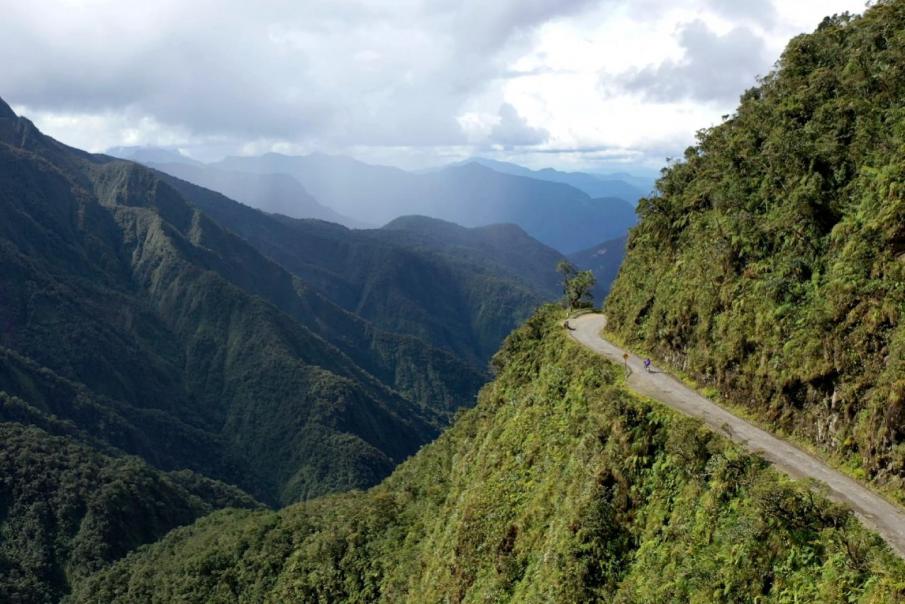 Born and raised just outside of Northam, Kate Leeming has embarked on an extraordinary series of cycling expeditions to raise money and awareness for numerous causes, often supported by Western Australian mining companies. Her big goal is to cycle across the Antarctic, including the South Pole, and she has a unique bike with a dual-drive gear system to attempt to achieve that.

In training she recently tackled the Andes in South America, but the pandemic cut this short and she had to make a mad scramble to get out of Bolivia before the borders were shut. Here’s her story.

When I left Australia on February 26, bound for South America to do an eight-week altitude cycle expedition from Cusco in Peru, through Bolivia, Chile and Argentina, I obviously knew about COVID-19 but never considered that it would pose a threat to the successful completion of the journey.

I was focused on making the challenging journey a success and had already received a few curveballs. With less than three weeks to go, the filmmaker who had committed to accompany me on a motorbike had to pull out. I managed to scrape together a plan B with Chris Pennington, an emerging young adventure filmmaker agreeing to join me for six weeks of the journey from La Paz, Bolivia; and, in the nick of time, a Peruvian film producer managed to find me a local filmmaker and fixer to accompany for the first 10 days. Finding reliable vehicle support in the different countries to enable the journey to be filmed was also a complicated last-minute operation.

The start of the journey through southern Peru was a great success; exploring ancient Inca sites such as Cusco, Machu Picchu and the Sacred Valley, then diverting into the highlands to extend myself in the rarified air at an altitude of more than 5,000 metres, and finally through the fertile agricultural landscapes in the south around Lake Titicaca’s turquoise waters. During this time, I was keeping an eye on the COVID-19 situation, noting how the world’s media was peddling fear through its channels. I believed that I was in one of the best places, considering that I was generally travelling through remote countryside and on a continent that was farthest from the virus action.

When Chris joined me in La Paz, he gave a firsthand account of how the situation was ramping -p in Australia and we soon learned that we would have to go into two weeks of self-isolation when we returned. That didn’t seem much to worry about at the time as it was at least six weeks away and things could change. I was happy that I was able to write blogs full of positive stories for people to enjoy. I hoped that classes in Australia and around the world were able to take part in the lessons created specifically for the project - about the Global Goals and leadership.

In the meantime, I had been thrown another curveball because the driver I had employed for Bolivia and Chile had suffered a motorbike accident and was in hospital. Fortunately managed to find another reliable driver.

Setting off from La Paz and over another high pass before dropping down into the rainforest of the South Yungas and taking on Death Road, I still wasn’t worried but we noted that not only Australia, China, Europe and the US were introducing more and more restrictions, but now South American countries were imposing new laws. On my third day out from La Paz, the situation became untenable. Argentina had closed its borders, Chile was about to and schools were closing. This all meant that I wouldn’t be able to achieve any of the planned outcomes for the expedition. Having only completed about a third of the journey, I reluctantly made the decision to postpone it and return to Australia to wait until the crisis was under control.

On the five-hour drive back to La Paz, Qantas announced it was grounding 95 per cent of its fleet and suddenly it seemed that we may struggle to leave the country. Bolivia then announced that it was closing its airport and borders on March 21. We had four days to leave the country and our travel agent, after he was initially unable to find any flights, managed to secure us seats on the last flight out on March 20. We thought we were secure, but then the Bolivian government changed the date, announcing that all foreigners had to be out by 11.59pm on March 19. Now we were worried. I registered with the honorary Australian consulate in La Paz and the Australian consulate in Peru. I applied to get us on a chartered flight to Sao Paulo the next day, but the opportunity disappeared due to high demand.

Our travel agent was trying everything he could. He was under pressure as other clients also needed flights home - my friends in Svalbard, Norway and other Australians in Canada and Morocco. He couldn’t see any options opening up for Chris and I and suggested that we get to the airport to see if we could find a flight. A curfew had just been implemented in La Paz that evening, from 5pm to 5am. We weren’t meant to be out of our hotel. La Paz had no known cases of COVID-19 and I believe they were locking the city down to protect it.

Rolando, our driver, was from Uyuni in the south of the country but hadn’t been able to return because of the lockdown. He returned to help us out. All taxis and public transport had been stopped - we could not have moved without Rolando. We loaded our vehicle and made a dash for the airport. The main city of La Paz is located in a deep valley with the airport built on flatter land about 500-metres elevation above the city. Normally the city is gridlocked with traffic but the streets were eerily empty as we set off to the airport, except for the police and military - they were everywhere. The government had warned that anyone found out after 5pm could be arrested, but we decided we had to take the chance. Kudos to Rolando, who risked all to help us! Not far from our hotel we were stopped by a policewoman. Rolando showed her my passport and explained that we were from the Australian consulate and were heading for the airport to leave the country. She seemed okay with that and let us move on. From that point Rolando stopped for nothing. He ran every red light and avoided or went through barriers.

There was no joy at the airport. Latam Airways was grounded and there were no flights or airline representatives to speak to.  We decided we should return to our hotel and hope we could get on the mercy charter flight. It was a big decision to return as we were worried about being detained by the armed forces. Again, Rolando stopped for nothing, driving steadily through every red light and barrier, taking back routes to avoid the security forces in the city. Even the stray dogs around the city looked puzzled at the absence of traffic.

We were relieved to be back at the hotel, which was comfortable and secure. The place was formerly the Panamanian consulate and the managers were extremely supportive. By this stage, we were almost resigned to the fact that we were stuck there at least until March 31 when the government was going to review the lockdown situation. The worry was that this restriction could be extended for months, and with all of the airlines grounded there was no way out even then. The hotel managers initially assured us that they weren’t going to close but it was likely that the government would soon order all hotels to shut their doors, as has already happened in Peru. With the situation being so fluid, uncertainty was the most disturbing issue. We didn’t know who or what to believe anymore.

My travel agent got to work once more. The only country in South America still open was Brazil, so  we had to try to go through Sao Paulo. It was after midnight when an opportunity opened and Colin was able to book us both on the flights. At 3am, Rolando drove us non-stop back to the airport. We were still very nervous that the authorities might arrest us, but this time we weren’t stopped. With no sleep and way more luggage than we were permitted to have on the internal flight, I did not relax until we had our boarding passes. Our transit time was 53 hours via Santa Cruz (Bolivia), Sao Paulo (Brazil) and Dubai to Melbourne.

Over the last 30 years, I have cycled a distance equivalent to more than twice the Earth’s circumference on my major journeys and on every continent (except Antarctica - that’s next). I’ve had to deal with all sorts of curveballs. No successful expedition is void of obstacles and inconveniences. All of my journeys have required that I adapt to the ever-changing conditions and maintain a positive attitude to be successful. The key is to focus on what is needed to do to get through safely rather than be blinded by curveballs and negatives that could be perceived as obstacles that might stop me.

I have cycled through some of the most remote corners of the world - the Australian outback, Svalbard, Greenland, Arctic Canada and remote Himalayan regions and through many developing countries - through 20 countries across Africa (Senegal to Somalia), in India and now in Peru and Bolivia. I am always inspired by how communities manage with what they have, adapt to the conditions and pull together in difficult times.

By contrast, I live in one of the ‘world’s most liveable cities’, where I can access just about any food I like from anywhere in the world, where basic services are taken for granted, where young people have access to a quality education, etc. but also where there are increasing mental health issues, increased numbers of people are feeling isolated and less in touch with what I think of as ‘the real world’.

Despite the general inconveniences restrictions in place to control the COVID-19 virus, maybe this is an opportunity for we in the developed world to reset, build closer communities, not take conveniences for granted, grow some of our own food and not ‘need’ products that have been transported half way around the world. Everyone gets thrown curveballs. The key is not to be blinded by fear and negatives. To get through it is always a case of adapting, pulling together and looking for the positives - focusing on how to get through rather than being blinded by the negatives and what might stop you.