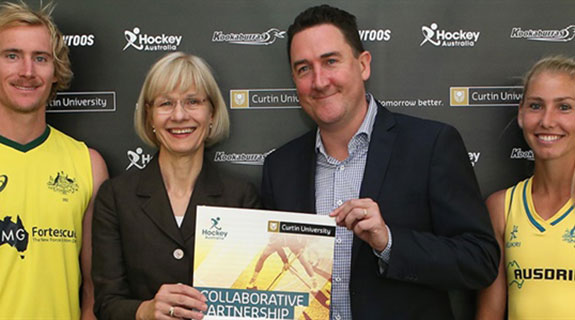 Curtin University has become the latest sponsor of Hockey Australia, leveraging the fact that Australia’s globally dominant teams are based at the Bentley campus.

The two-year deal, a period which includes the sport’s most high-profile outing in the 2016 Rio de Janeiro Olympic Games, will give Curtin exposure on the uniforms of both the Kookaburras and Hockeyroos, as well as research into performance on the sporting field.

The Kookaburras and Hockeyroos have consistently been at the top of the hockey rankings and are contenders for gold medals. The game is played internationally but its reach into Curtin’s core Asian markets is significant.

The arrangement further highlights the Western Australian edge to sponsorship garnered from having the national teams and the Australian Institute of Sport hockey program based in Perth.

Perth-based Ausdrill is the major sponsor of the Hockeyroos, while Fortescue Metals Group is the biggest commercial supporter of the Kookaburras.

Professor Terry said that, as part of the deal announced today, Hockey Australia would have access to Curtin students, facilities, research and resources, including projects that directly assisted with the on-field performance through fields such as physiotherapy, exercise and sport science but extending to communications and event management.

“The School of Design and Art will undertake a uniform design capability project looking at potential improvements to the playing kit of Hockey Australia such as adding smart devices into the design to assist with player management,” she said.

In April Curtin signed an alliance with the Fremantle Dockers, giving its media, exercise science and sports medicine students access to training opportunities with the professional football team, who in turn were given access to Curtin academic staff and research.