THE corner of Bulwer and Lake streets in North Perth is becoming a Mecca of upmarket Asian food, with venues such as Nahm Thai and Nine Fine Food taking the offering to a new level. 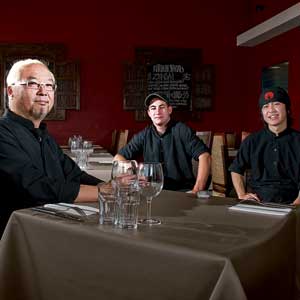 THE corner of Bulwer and Lake streets in North Perth is becoming a Mecca of upmarket Asian food, with venues such as Nahm Thai and Nine Fine Food taking the offering to a new level.

Located at 223 Bulwer Street, Nahm Thai only opened a few months ago but has already been named as a favourite by top industry figures, such Star Anise's David Coomer.

Owned and run by Kevin Pham, Nahm Thai is a modern Thai dining room with a warm and elegant feel to it.

Right next door is Japanese eatery Nine Fine Food, which next month celebrates its fifth anniversary.

Nine Fine Food has a unique feel; the menu has just six entrees and six main courses, and four special dishes, which change every three weeks.

Kyoto-born owner Muneki Song says his cuisine is influenced by his mixed history, with his grandparents moving from Korea to Japan during World War II.

Having travelled extensively throughout Europe, Australia and the US for much of the past 20 years has also influenced his cooking style, Mr Song says.

He and his wife were so eager to take-up the lease on the Bulwer Street venue when they first saw it that they neglected to consider the site's limitations, he says.

"We drove past it as we were looking for a small place. It was for lease, when we saw it we thought it was perfect but we didn't think about it really carefully because the toilets are only small so we can't get liquor licence without making big changes; costing wise it's too much as well as all the other things I have to comply with," Mr Song told Gusto.

The couple decided to remain BYO and focus on the food.

The Omakase Dego is available as well, 'Omakase' means trust the chef, and depending on what the customers are intending to drink that night, Mr Song will adapt the menu to it.

Mr Song says although the venue is now popular with locals and fully booked on weekends, it was difficult at first to attract people to the area. The opening of Nahm Thai next door has been really good for business, he says.

But it's Mr Song's regular customers with their high expectations who push his creativity.

"Some particular customers have been coming here almost every Tuesday night for the past five years, so of course they don't look up the menu, they sit down and start doing the dishes," he says.

Mr Song came to Perth as an overseas student to study English in 1990, but kept travelling and came back in 1995 to stay.

"I liked Perth when I came here the first time, because it's relaxed, easy, the people are friendly, [it has a] nice environment, good weather. I was young," he says.

Mr Song started his cooking career with Brett Carboni, who started Bonsai in Leederville and Tsunami in Mosman Park.

Now, he is slowly stepping back from the cooking side of things as his two sous-chefs - Taisuke Kobayashi and Scott Roycroft - are going to take over the running of the kitchen.