Several businesses in the Fremantle area are enabling payment with bitcoin and alternative online currencies. 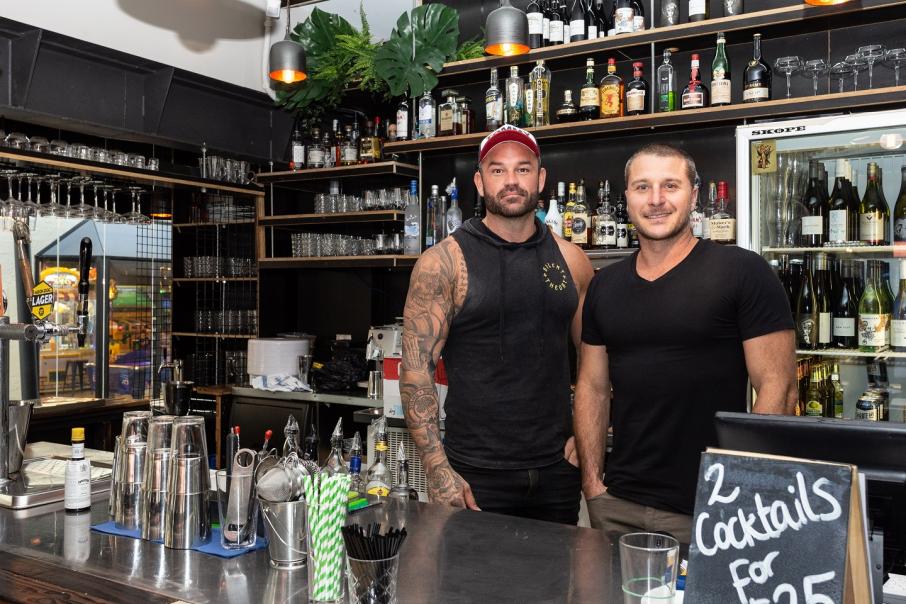 Vin & Oli owners Stuart Anderson (left) and Blair Steenholdt believe cryptocurrency will be the means of exchange of the future. Photo: Gabriel Oliveira.

A number of Fremantle businesses have recently signed on to accept payments in cryptocurrency in the hope the electronic tender will garner broader adoption long term.

The move comes after the price of bitcoin, the most widely used cryptocurrency, has roughly doubled this year to about $11,500.

Cryptocurrencies are electronic mediums of exchange that use encryption to secure transactions, with movements of the coins tracked on a distributed ledger called a blockchain.

Thousands of cryptocurrencies have been developed.

Despite huge media attention for the sector, uptake of the online currency for real-world payments has been slow.

But co-owner of Fremantle bar Vin & Oli, Blair Steenholdt, is confident their use will become widespread.

“It’s definitely the means of exchange of the future,” Mr Steenholdt said.

“It’s a great talking point when people come in, and it brings people in.

“Especially for tourists; some of them follow a bit of a crypto trail and if they know you accept those payments they’ll come in, and it builds relationships.”

Vin & Oli reopened under new ownership on Good Friday this year, and has accepted cryptocurrency payments from day one.

Mr Steenholdt said he had been involved in the cryptocurrency space since 2017, when he founded a brokerage called Blockchain Wealth.

Merchants pay a $400 upfront fee, with no merchant fee on transactions for the first year.

From a merchant’s perspective, the payments are quickly exchanged into dollars, reducing risk from the currency’s volatility.

Two other Fremantle businesses to recently sign on were Kamran Accounting and Home Provedore.

They join 10 others in WA that use the platform including – Alter Ego Bar, Bodkins Bootery, and Kerry Street Pear Tree Cafe in the Freo area.

Kamran Accounting co-owner John Greeve told Business News customers could pay using an ipad or phone, in the same way they would with a credit card.

Mr Greeve said the firm would begin using the platform in late May.

“You need to evolve your business so you are in the place of taking the most efficient mechanism for exchange,” he said.
“Remember the old days, we used to go to Europe … you’d go across borders … and by the time you got back to Australia you had loose notes from about 10 different countries you were never going to visit again.

“Credit cards have fixed that to some extent, but they’re expensive.

“(Users) will convert to whatever is the most efficient system, and blockchain is superior.

“Its speed, its agility, is just far more efficient.”

Mr Greeve said Fremantle was a great location for businesses to accept cryptocurrencies because of the high tourist traffic.

“People hop off boats (in Fremantle), and they won’t have to run around looking for a money exchange,” he said.

“We get paid in cash; from our point of view it’s the same, the backroom converts their cryptocurrency … to cash, as quick as a credit card,” Mr Greeve said.

“The important thing is we’re not trying to trade in crypto, we’re receiving coin of the realm.

“What (customers) are able to do is use their crypto to purchase transactions.”

These aren’t the first in Perth to accept cryptocurrencies, with about two dozen businesses having previously accepted bitcoin payment.

Many either no longer offer the option or are no longer trading.

One still going strong is Frisk Small Bar, a gin bar in Northbridge.

Owner Frisca Rusli told Business News the first round of drinks using the currency was purchased in 2013, when it was trading at $400 per coin.

A further group of retailers, such as Como-based Techniq Computers, hosted Bitcoin ATM machines, although that business said the machine was removed about a year ago.

In late May, the company announced it would be the first mobile carrier to accept bill payment in cryptocurrency, through payment service provider Bitpay.