What started as a conversation between friends has resulted in Crib Lane, a new affordable and casual tapas-style eatery in the city. 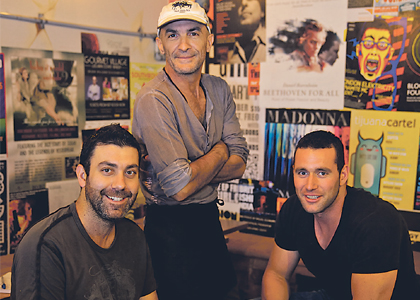 What started as a conversation between friends has resulted in Crib Lane, a new affordable and casual tapas-style eatery in the city.

CRIB Lane pinched its name from miners’ parlance, where they call lunch a ‘crib’.

The Hay Street cafe’s owners may have crimped on the decor, using second-hand and recycled items, but they have worked hard to offer patrons good-value meals in a relaxed, homely atmosphere.

The cafe, at 847 Hay Street next to His Majesty’s Theatre, can seat up to 40 patrons and opened its doors last week.

The business is owned by Daniel Cowley-Cooper, Rocco Macri and Peter Tassone, who met through separate hospitality endeavours.

The catalyst for Crib Lane came from Mr Cowley-Cooper, who wanted to do something with Mr Macri and Mr Tassone.

“Dan found this little space and called Peter, Peter called me and here we are,” Mr Macri said.

“I sold my business, Box Deli, a couple of years ago at the same time as Peter sold his, the Bassendean Hotel.”

Since then Mr Macri and Mr Tassone have had a break from the hospitality industry.

“We’ve been floating around for the last couple years ... I did a little bit of cooking with Rio up at Argyle diamond mine, as well as driving trucks,” Mr Macri said.

“This mine-site work helped me come up with the name crib; it’s a miner’s packed lunch.”

Mr Macri said his Box Deli small bar on Hay Street and Crib Lane could not be more different.

“Being tight, cosy and fun is relevant today ... I wouldn’t open a Box Deli today,” he said.

Gone are the expensive decor, food and drinks.

Instead, Crib Lane’s decor was sourced from second-hand materials and meals are priced under $15.

The owners want to attract couples and singles working in the city with a product that is cheaper and more convenient than cooking at home.

“We want it to be an escape in the city that feels like it’s been lived in ... we want everything that’s not in the customer’s office environment to be here,” Mr Cowley-Cooper said.

“We used recycled materials like 100-year-old boxes for the benches, recycled timber floorboards and ceiling lining and piping salvaged from scrap yards.”

This philosophy extends to the cutlery and crockery, which are biodegradable.

Unlike other new establishments in the city, Crib Lane does not have a liquor licence.

“Most new venues are applying for liquor licences but we’re not really going for that ... customers can drop off a bottle of wine on their way to work and we’ll refrigerate it for when they come back later,” Mr Macri said.

He described the cafe as being “almost home-like”.

“A lot of people are disconnected from their families, or work interstate and abroad,” Mr Macri said.

“Crib Lane is designed to help facilitate interaction at the dinner table with other people.”

This influenced the pricing of the menu and what is served at the cafe.

“We want to keep it at a price so that people come back like it’s a second home,” Mr Macri said.

Adding to this ‘homely’ feel is Mr Tassone’s Nonna’s biscuits and his father, who works on the coffee machine.

There are also plans to have a menu that evolves to customers’ tastes.

Mr Macri, who is in charge of the kitchen, said the menu would incorporate influences from many different cuisines and actively encourage customers to make suggestions.