Classic Minerals has hit the sweet spot with the drill rig at its Kat Gap project, near Southern Cross in WA, with high-grade intercepts such as 3m @ 20.70g/t gold from 39m downhole that includes a bonanza, 1m intersection, going well over an ounce to the tonne gold. As the drilling density increases across Kat Gap, the mineralisation could reach in-excess of 800m in strike. 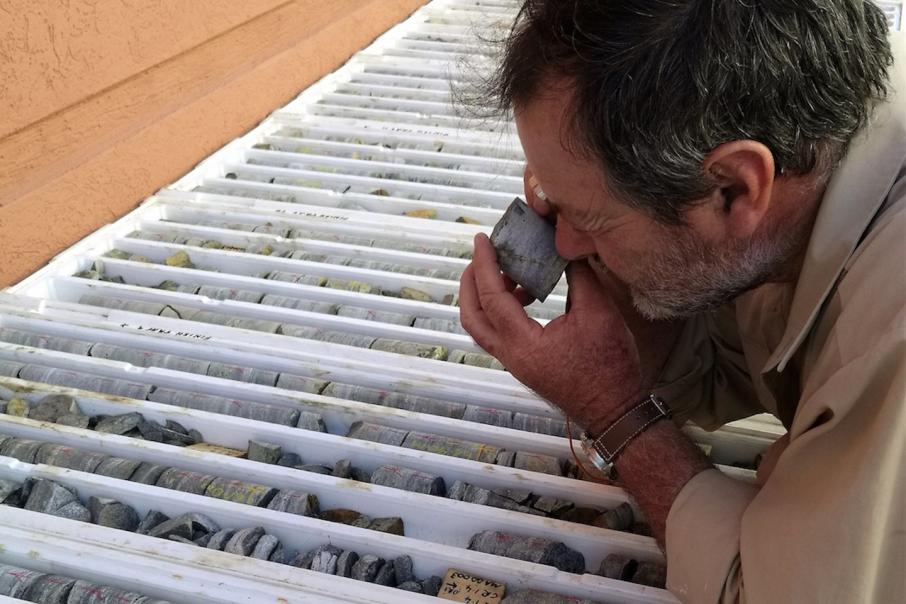 Dean Goodwin, Classic's CEO, getting up close and personal with core at the Kat Gap project near Southern Cross in WA, where drilling has extended high-grade gold mineralisation to over 500m.

Classic Minerals has hit the sweet spot with the drill rig at its Kat Gap project near Southern Cross once again, with the company hitting high grade intercepts such as 3 metres grading 20.70 grams per tonne gold from just 39 metres downhole that includes a single meter at greater than one ounce per tonne gold.

The back story to this ASX-listed WA exploration company, its Forrestania Gold project and its ex-Western Mining CEO is somewhat interesting.

The science of mining and structural geology really started emerging around the 1930s and was largely pioneered by a Harvard professor named McLaughlin. Around the same time, a small company by the name of Western Mining Corporation was formed. WMC subsequently engaged the services of the good professor with a directive to set the scientific standard and the calibre of the geological culture within its emerging enterprise.

Mapping and innovative geological interpretation became the mantra of the WMC explorationists and it was the start of a culture that stuck for many years.

WMC was one of those rare companies founded on science with a Board that empowered its Geologists to use the very best of scientific tools and their minds, to sniff out ore bodies.

Interestingly, Classic Minerals is now headed up by Dean Goodwin, a Geologist who cut his teeth in Geology at WMC during its heady days of science-based discoveries.

For Goodwin, finding a new gold mine on Classic’s ground is very much “unfinished business” and he has wasted no time in setting a number of spectacularly successful drill targets since taking the helm.

To date, Classic has drilled 106 holes for around 7,800m at Kat Gap and most of the holes have hit their mark, returning high grade intercepts and defining gold mineralisation over 500m in strike.

Commenting on the latest round of results, Mr Goodwin said: “These new results clearly demonstrate that [Kat Gap] has great potential to grow not only along strike but at depth as well. The northern extension RC drilling focused on testing the [prospective] granite-greenstone contact at shallow depths down to only 50m vertical below surface.

If these ore-grade zones continue further north, then we could be looking at strike lengths in-excess of 600-700m…”

…“The next RC program will focus not only on the northern strike but also the southern strike potential for at least 100m. If we have similar numbers south of the [Proterozoic] dyke, then we could be looking at something really special with strike lengths in-excess of 800m in total.”

With only a handful of drill holes testing the Kat Gap ore body at depth and an increasing geological and structural picture starting to emerge, Kat Gap’s potential in pretty much every direction looks to be exciting.

Heading about 50km north within the company’s Forrestania gold project, further recent drilling just north of the historic Lady Ada pit, targeted high-grade quartz veins. The best numbers there were from shallow depths, where weathering processes are known to leach out gold. Results including 2m grading 1.85g/t gold from 27m downhole are encouraging and further drilling will attempt to pin down higher grade quartz veins at depth.

Although the quartz lodes intersected returned relatively low-grade values, they are very significant in the fact that quartz veins intersected historically at Lady Ada at the same depth also contained low-grade values but projected down at depth forming the high-grade sapphire lode.”

The Lady Ada pit that was mined at almost 9g/t for about 30,000 ounces of gold in its day and still has an existing resource of around 35,000 ounces beneath the old pit.

Lady Ada’s sister deposit about 600m north of the pit, Lady Magdalene, has a better-endowment with nearly 182,000 resource ounces of gold.

These holes intersected broad zones of anomalous gold mineralisation up to 10m thick, with a peak result of 3m grading 1g/t gold from 96m down-hole.

Given that the area has never been targeted for gold in the past, these first-pass results with ok grades are intriguing but do not explain the size and magnitude of the anomalous soil geochemistry in that region.

Just where it came from will no doubt be a question that Goodwin will attempt to answer in time – perhaps with a little help from science.