Coziron Resources will soon have a diamond rig operating at its Croydon Top Camp project in WA’s Pilbara region after the company’s maiden drill program hit some notable results recently, including 8m grading 10.2 g/t gold. The maiden program was drilled on wide-spaced sections and the company says the new drilling will provide valuable structural information on the orientation of its emerging discovery. 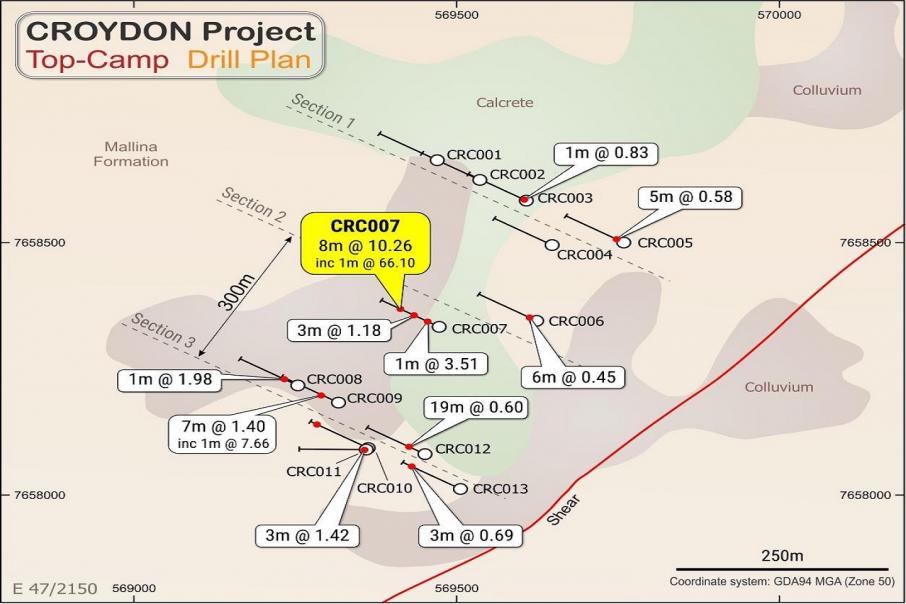 Coziron Resources will soon have a diamond rig operating at its Croydon Top Camp project in WA’s Pilbara region after the company’s maiden drill program hit some notable results recently, including 8m grading 10.2 g/t gold with a one metre interval running at over two ounces per tonne.

The maiden program was drilled on wide-spaced sections and the company says the new drilling will provide valuable structural information on the orientation of its emerging discovery.

The company said that continuing to work on its more compelling targets will be well within the operational boundaries, as set by the Australian Government due to the Covid-19 outbreak.

The drill holes were spaced on around 300m sections and the company says that the planned diamond drilling will provide valuable structural information on the orientation of its emerging discovery and help to plan subsequent rounds of drilling.

Top Camp sits on a broad northeast trending geological and structural corridor that is interpreted to be related to the Tabba Tabba shear zone, according to Corziron.

The Tabba Tabba shear zone can be identified by using geophysical data to map out the shear zones location. Coziron said the shear appears to have a strong correlation with historical gold deposits.

The significance of the Tabba Tabba shear has been recently highlighted by DeGray Mining’s Hemi gold discovery. DeGray first hit the market with its news in December last year, with some of the best results from Hemi since including 78m grading 1.8g/t from 40m and 72m grading 1.6 g/t gold from 105m.

Corziron’s Croydon Project is also situated in an area with a growing inventory of emerging gold deposits. The Withnell mining centre for example,  also owned by DeGrey, boasts a resource of 1.1Moz of gold.

Withnell is a mere stone’s throw from Coziron’s Croydon project, at just 30km to the northeast.

Coziron is also planning on infill RC drilling at Top Camp and it will put additional holes into the Bottom Camp, Martin and Murph prospects.

Bottom Camp is only 5km away from Top Camp and features scatterings of artisanal gold workings. Coziron has previously run a soil sampling program across Bottom Camp and found that 20% of all samples taken analysed between 0.02g/t to 0.8g/t gold, which is considered highly anomalous for a soil sample.

At the Murph prospect, a potentially prospective deformed porphyry has been identified that is associated with anomalous gold and arsenic levels from soil sampling, according to the company.

Coziron also said that prospectors had been active around Murph and its Geologists had previously noted sulphide minerals and quartz veining during geological reconnaissance mapping.

The Pilbara gold rush has allowed a whole set of new eyes to look at the geology up there and Coziron’s Geologists have noted that the rocks look very similar to those found in some hefty gold deposits in West Africa.

Gold mineralisation at Top Camp appears to be hosted in carbonate and quartz-rich sediments, according to Corziron, who notes that these rocks are similar to those found at the Loulo-Gounkoto and Sadiola-Yatela geological complexes.

These geological hosts are known to host an astonishing 5 million plus ounces of gold.

Coziron is now using these geological affinities to understand what it might be up against at Top Camp and how the mineralisation and potentially new deposits may be distributed in the rock sequences.

Coziron Chairman, Adam Sierakowski said: “The Company is focused on expanding its first drilling success at the Croydon Top Camp project in the shadow of De Grey Mining’s growing Hemi gold project that is situated to the northeast.”

“Coziron has plans for further drilling and exploration across the entire tenement to follow-up areas with significant gold and pathfinder element anomalism.”