Coziron onto copper/gold targets near Yalgoo

Coziron Resources has uncovered large scale gold and copper anomalies at the Edamurta West and Copper Valley prospect areas within its broader Buddadoo project region southwest of Yalgoo in the Murchison. Edamurta West is defined by a 1.2km long geochemical soil anomaly elevated in gold, whilst Copper Valley lies within structural corridors that returned rock chip assays up to 15.2% copper and 1.2g/t gold. 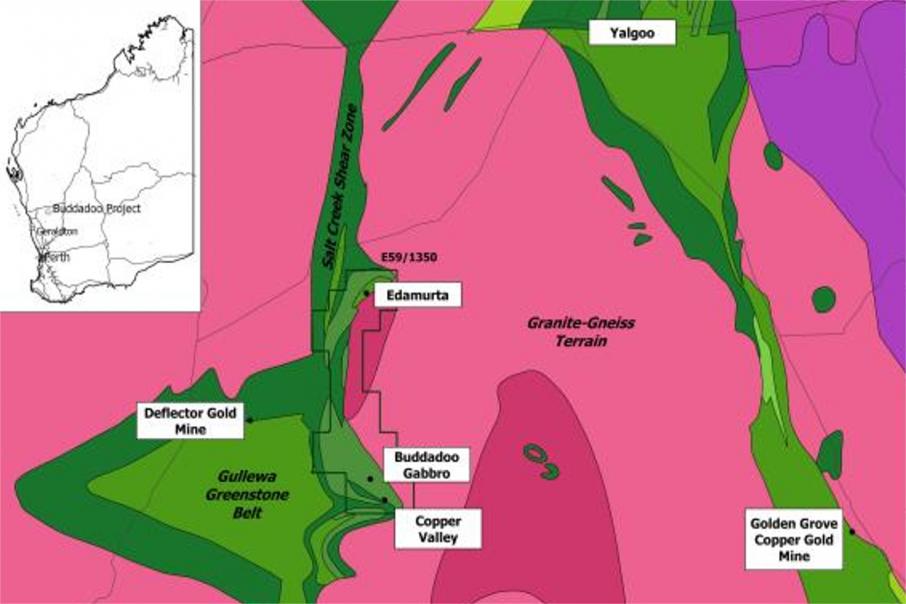 ASX listed multi-commodity explorer Coziron Resources, has pivoted towards the copper and gold opportunity at its Buddadoo project near Yalgoo in the Murchison.

Coziron has been undertaking an extensive regional review of the geological and geophysical data in the area for gold and copper in parallel with its exploration activities on the large, undeveloped Buddadoo vanadium project,

The company has now delineated two new prospects, Edamurta West and Copper Valley. They are at opposite ends of an exploration licence that covers the Buddadoo vanadium-rich titanomagnetite-hosted ore system.

The Edamurta West prospect is located on strike and 10km northeast of the Deflector gold mine, currently being operated by ASX listed Doray Minerals, which holds a global mineral resource of 2.85 million tonnes grading 8.7g/t gold and 0.6% copper.

Coziron has completed a broad-spaced geochemical soil sampling program at Edamurta West and defined a 1.2km long, coherent anomaly, elevated in gold and the pathfinder elements arsenic and antimony.

The anomaly remains open to the north and south and the company is planning to extend the soil sampling grid to cover these extremities.

Interestingly, the prospect area overlies a magnetic feature adjacent to the eastern edge of a regionally important shear zone that hosts the Deflector deposit and several other gold prospects in greenstone rock sequences to the southwest.

Coziron will also complete some first-pass exploratory aircore and/or RC drilling over the stronger soil anomalies in order to determine the underlying geology and target the interpreted locations of subsurface mineralisation.

At the Copper Valley prospect, located about 20km south of Edamurta West, Coziron has completed rock chip sampling over 5km of a wide, northwest trending structure, turning up encouraging copper and gold assays peaking at 15.2% and 0.6g/t respectively.

In addition, the company says that splay faults from Copper Valley run up the eastern edge of Buddadoo Hills and rock chip sampling in this region produced gold results up to 1.2g/t, indicating prospectivity for further mineralisation.

Several pathfinder indicator elements for shear-hosted gold systems also proved anomalous in this area, with tungsten assays up to 4.56% and elevated levels of arsenic, molybdenum, bismuth and tellurium.

However, given the generally poor outcrop and soil cover over the eastern edge of Buddadoo Hills, Coziron said that drilling will be required to test for subsurface mineralisation in this region.

The company has not taken its foot off the gas at its Buddadoo vanadium project either and is currently completing metallurgical test work studies on magnetic concentrates from that deposit.

Coziron recently secured a $1m loan facility from the Creasy Group who is also the company’s largest shareholder.

Those funds will be used to advance exploration at the flagship Buddadoo vanadium project and also the Croydon Top Camp gold project in the western Pilbara, where the company is acquiring a 70% interest from the Creasy Group.

The company drilled Buddadoo during the first half of 2018, returning encouraging results of up to 22 metres grading 0.47% vanadium pentoxide from 52m down-hole.

In May, Coziron reported a stunning, 188m intersection grading 0.34% vanadium pentoxide and 9.4% titanium dioxide from 12m down finishing in mineralisation. Just how far this mineralisation will extend is anyone’s guess but at 188m already, this is looking interesting.

Vanadium is one of the emerging battery metals globally with premium vanadium pentoxide prices sitting just above AUD$70,000 a tonne this week.

The generation of large-scale gold and copper anomalies across the Buddadoo tenement holdings is another string to Coziron’s bow in its growing portfolio of commodity projects in WA.

Whilst this area of the Murchison region is well known for its numerous historical occurrences of gold and copper mineralisation, it is relatively underexplored compared to the Mt Magnet, Cue and Meekatharra mining districts further to the north.

With that in mind, Coziron has now focussed its attention on the wider mineral prospectivity of the Buddadoo project and the initial assay results for gold and copper look promising.