Coziron Resources’ rock chip sampling program at the Croydon Top Camp project in WA’s Pilbara region has returned up to 12% copper, 2g/t gold and 0.34% cobalt at the newly named Martin prospect, which represents a drill-ready target. Sampling at the Top Camp prospect has also highlighted areas that are ready for an initial RC drilling program to delineate the subsurface rock-types and down-hole geochemistry. 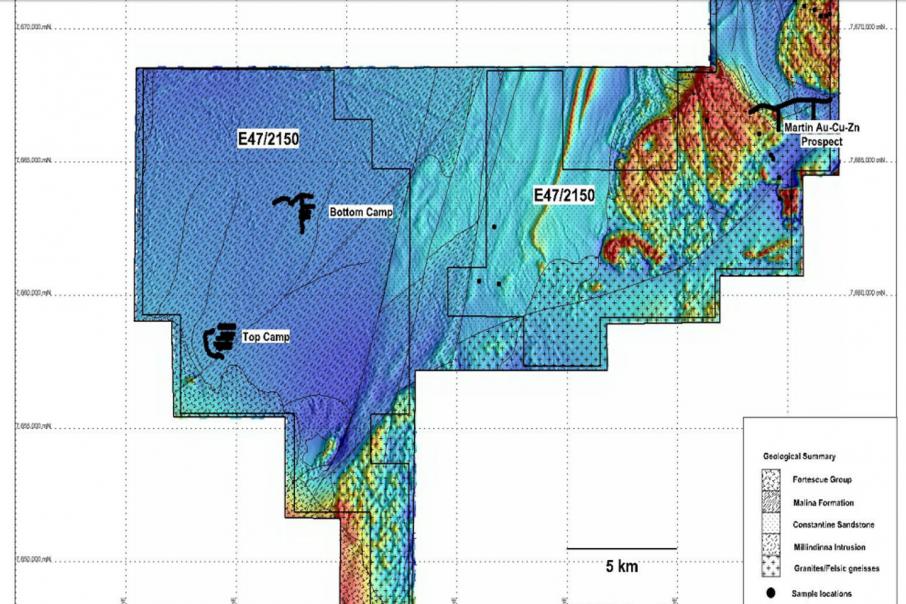 In the east of the tenement, rock chip sampling has returned up to 12% copper, 2 grams per tonne gold, 118g/t silver, 6% zinc, 0.34% cobalt and anomalous tin and indium from the newly named Martin prospect, which is centred on two shallow historical pits into an iron-oxide rich gossan.

Soil sampling indicated the gossan is located within a zone that is at least 40m wide in the mafic rocks, where copper ranges from 500 to 1000 ppm and zinc from 400 to 3000 ppm.

At the Top Camp prospect, rock chip sampling from historical workings on three small hills within an area covered by the historic auger drilling grid, returned up to 2.5g/t gold, 80ppm arsenic and 30ppm antimony.

Soil samples collected along an access track to the southwest of the auger grid returned up to 5.03g/t gold and demonstrated that anomalous arsenic and detectable antinomy is more widespread than historical exploration results indicate.

Taken together, the results highlight areas in the core of the auger grid that are ready for an initial RC drill program to delineate the subsurface rock-types and down-hole geochemistry.

Management said there are new targets emerging away from the auger grid too that have the potential to host zones of mineralisation and these areas require infill and extensional soil and rock-chip sampling.

A recent re-assay of the historic auger drilling returned significantly better results than reported historically, providing support for the view that it has the potential to be a lode-style discovery.

Meanwhile, first pass sampling at the Bottom Camp prospect has reported gold to 78ppb while rock chips have returned up to 225ppb gold.

The sampling has also outlined an area anomalous in arsenic and antinomy that requires infill and extensional sampling.

Coziron has also completed a high resolution magnetic and radiometric survey over the entire Croydon Top Camp project that provided new information to interpret bedrock geology and the structural setting of mineralised prospects beneath the widespread alluvial cover.

This data will be used to help generate and assess any exploration targets outlined for future work.

The company is acquiring a 70% interest in the 317km2 project from renowned prospector Mark Creasy’s Creasy Group who will retain a sizeable chunk of it and a solid shareholding in Coziron.

Creasy doesn’t tend to miss the mark very often and his presence in and around Coziron is curious and will no doubt have the market meerkats sitting up high.