David Coomer is on top of his game with his new venture. Russell Quinn reports. 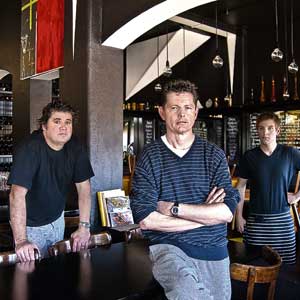 He worked hard to establish his fine dining restaurant, Star Anise, in Shenton Park when critics said it couldn't, or shouldn't, be done. Two stars from Australian Gourmet Traveller's Restaurant Guide in 2006 and a chorus of industry recognition during the past 11 years are just reward for effort.

Balancing that workload with the pressures of home life and raising three kids under the age of 16 with his wife, Kareen, sounds challenging, but Mr Coomer seems cool, calm, collected and, most importantly, very content.

Even when Matt Moran - arguably Australia's most famous celebrity chef from Sydney's ARIA restaurant - comes to town just before a very busy Friday night, Mr Coomer seems unflustered when asked to find a spot for the visitor at his recently opened new venture in Nedlands, a tapas bar called Pata Negra.

"It doesn't really add to the pressure [having Mr Moran drop in]," Mr Coomer told Gusto.

"The boys will just do what they do.

"He wanted a table at Star Anise but I couldn't get him a table there because we were full.

"Hopefully we can fit him in, but he might not even get a table [at Pata Negra]."

And while faced with the possibility of closing the doors to his fine dining restaurant in about 12 months (after the Star Anise building in Shenton Park was sold two years ago and its new owners sought to vacate the premises), he appears well aware of the options available to him.

Pata Negra is the result of a painstaking search for the perfect location for a tapas-style eatery somewhere in the western suburbs, a search inspired by the prospect of losing Star Anise.

"I think finding the right site in Perth is really hard," he says.

"And it's not so logistically simple as renting a shop and turning it into a restaurant; there's a lot of issues ... council issues, parking, all those things.

"So the best bet is to try and find an existing restaurant site that's either got bays in a car park area or bays allocated for it, otherwise they charge for it.

Mr Coomer is pleased to have found a suitable location in Nedlands after being very close to securing a much smaller location in North Perth almost a year ago.

"I'd been driving past here almost every day for a year, just going 'that's not a bad spot, someone will pick it up one day and do something with it', so it was always in the back of my mind," he says.

But turning Café Sol, which was a brightly coloured Tuscan-style cafe into an emotive, dark yet chic Spanish-style tapas bar was no easy feat.

Mr Coomer and his business partners in Pata Negra, long-time friends and Star Anise chefs Kurt Sampson and Matt Stone, spent more than $700,000 buying the premises, upgrading the kitchen, ripping up terracotta floors to lay concrete, painting and darkening windows to remove the "fishbowl effect", and paying carpenters to install long communal tables in the front half of the restaurant.

"I really like these two guys [Kurt and Matt] and we've done a lot together so it was sort of a thing to get these guys going as well, and I need their experience. I couldn't do this place without them, so it's win-win," Mr Coomer says.

Pata Negra is the name given to a highly prized black-trottered wild black pig from Spain's south-west, which is treated like farmyard royalty including special feed and shelter, much like the Japanese infatuation with Waygu beef.