WA’s commercial construction bosses remain cautiously optimistic, even as the industry reels from the longest and largest contraction of activity ever recorded. 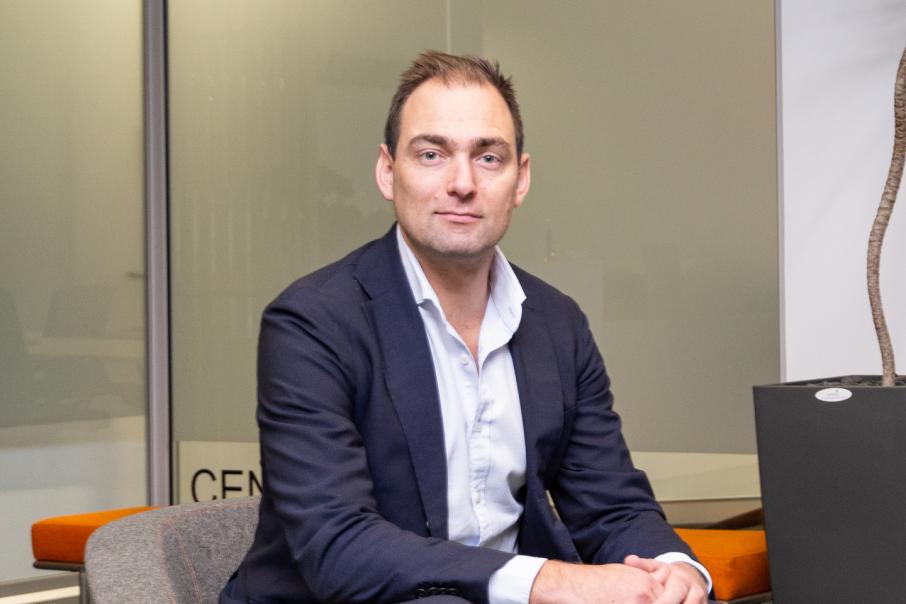 Sam Delmenico says he’s excited about the industry’s prospects in 2020 and beyond. Photo: Gabriel Oliveira

WA’s commercial construction bosses remain cautiously optimistic, even as the industry reels from the longest and largest contraction of activity ever recorded.

If the Australian Bureau of Statistics tracked morale as an economic indicator, it’s safe to say levels in Western Australia’s construction sector would likely be near or at an all-time low.

The state’s commercial building sector is just four years removed from its historical peak, according to ABS data, but those boom times seem a distant memory rather than recent history, particularly for the industry’s mid-tier and smaller players. 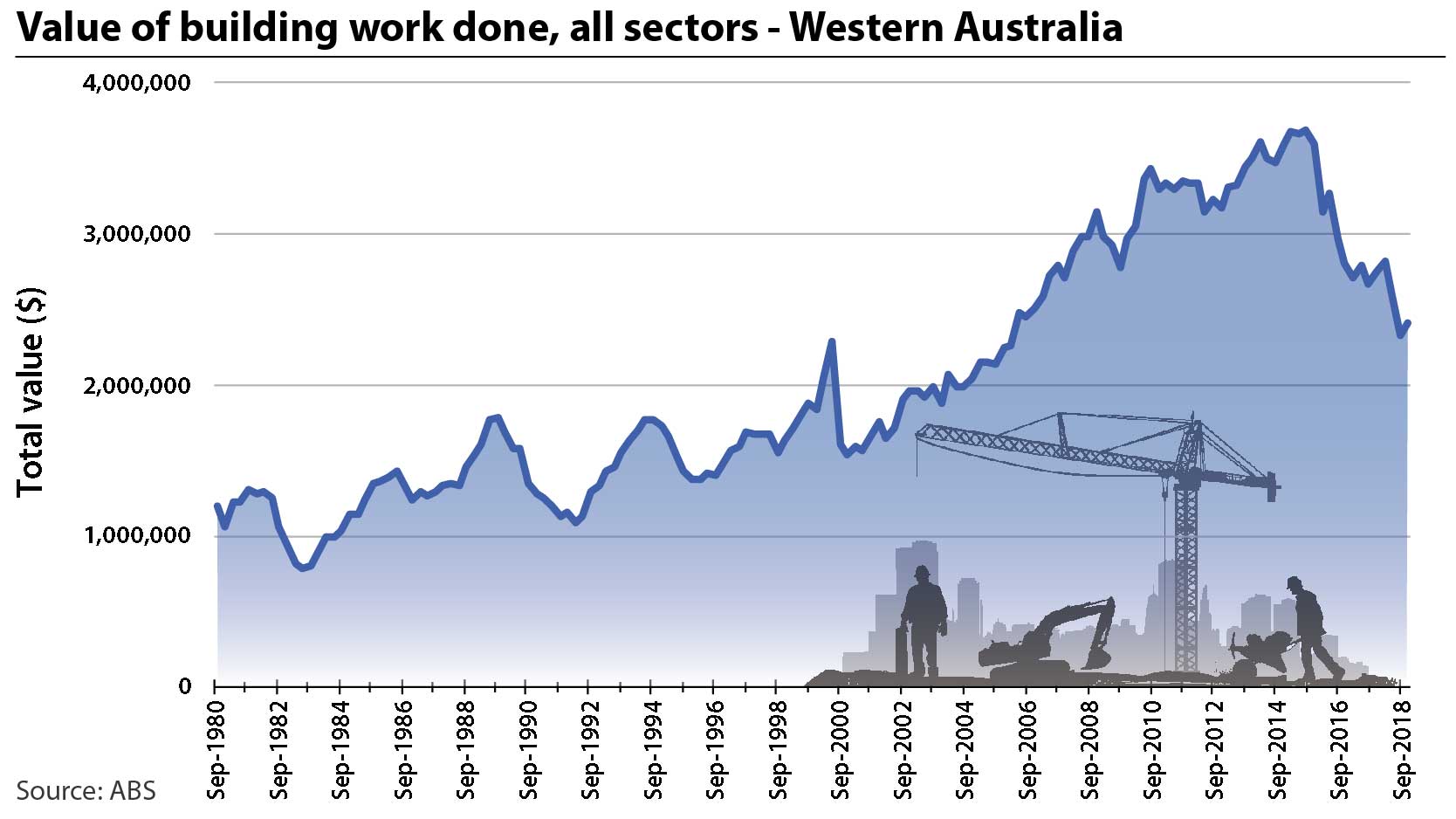 As the total value of building work done in WA has plunged from record highs to levels not seen for 13 years, pressure has mounted on contractors.

And, while many industry players acknowledge construction is a cyclically volatile sector, the length and depth of the downturn has surprised many.

“We are all hoping for things to pick up a bit – competition is good, we all understand that, but the balance is just a little bit out at the moment.

“I haven’t seen it this flat for this long, we have hit tough times in the past and the cycles always bounce back, but this one seems to have gone on, and just continued to grind away.

“I’m surprised that more builders haven’t fallen over yet.”

While some parts of the WA economy such as iron ore or the energy sector are experiencing an uplift in sentiment, the proverbial light at the end of the tunnel has not yet started to shine for commercial construction.

As recently as 2015, there were eight significant office buildings scheduled for completion in a calendar year, including four towers at the Kings Square precinct and the 35-storey David Malcolm Justice Centre.

At the same time, the state government was investing heavily, with mega projects such as the $1.6 billion Optus Stadium, the $1.2 billion Perth Children’s Hospital and the $440 million Elizabeth Quay helping to keep contractors’ work books full.

In 2019, those office projects have been completed, but have not yet been replaced, with many approved proposals remaining on the drawing board as the city’s office market begins to rebound from a long period of increasing vacancy.

The McGowan Labor government is also wary of making substantial investments like those of its predecessor, instead prioritising budget repair over new builds, while funnelling money away for its comprehensive public transport infrastructure upgrade, Metronet.

“We are probably 35 to 40 per cent down from where we were at our peak in terms of volumes of work in the marketplace,” Mr Kunkler said.

“That’s having a fairly significant impact on how hard people have to compete to win work, and then there are a whole range of flow-on effects down the supply chain from head contractors down to the smallest subcontractor.”

He said Perth’s apartments market, which had been a solid pipeline for contractors, was not providing any substantial solace for those struggling to pick up work.

An expected bonanza in retail building has also not fully materialised, with a $500 million expansion of Westfield Galleria deferred, negotiations between AMP Capital and Scentre Group’s building arm over a $750 million expansion of Garden City Booragoon becoming increasingly drawn out, and no firm date set for the start of a planned $450 million redevelopment of Westfield Stirling, formerly Innaloo.

“On the client side of the equation, developers are really finding it tough to make jobs stack up as well,” Mr Kunkler said.

“With almost zero net migration into WA, things like apartments and mixed-use projects, even some of the retail stuff is marginal at best and, if you look at the lack of people around to buy new product, it becomes increasingly challenging.

“It’s a bit of a tough gig for most people in the market, that’s for sure.”

That environment, Mr Kunkler said, was forcing builders to go beyond a client’s brief when tendering in order to differentiate from competitors’ bids.

“We always look for ways to innovate, to do things differently and to be able to build value and provide program efficiencies, cost efficiencies, whatever it may be, you need to build further potential into the project,” he said.

“You can’t just build what’s put in front of you any more, you have got to look for potential in everything you do, that’s really important today.

“When we do a tender today, it’s as much about looking for how you can add value beyond what the tender asks you to do as it is about pricing what they ask you to do.”

Perkins’ Mr Parrish said the dearth of projects worth $500 million-plus in WA was having severe flow-on effects, which were particularly being felt by mid-tier contractors such as Perkins.

“With most projects these days you have to go through an expressions of interest process before you even get onto a tender list,” he said.

“It’s fair to say that it’s hard to get on a tender list now, especially when the bigger companies like Multiplex and Probuild, these sorts of guys, when they start looking at smaller jobs.

“They come down and they knock someone else off a tender list.

“It does make it more difficult and it makes us all focus on improving everything we do, the efficiencies in our construction and the way we present our business. We just have to get better.”

However, contractors at the top end of town are also feeling the pinch from the pressure of a shrinking pipeline of potential work.

Probuild WA managing director Sam Delmenico said that while the national contractor currently had three major projects on its books in Fragrance Group’s NV Apartments and hotel development on Murray Street, the soon-to-be completed Ritz-Carlton and The Towers and Sirona Capital’s Kings Square Fremantle, he also acknowledged the challenges facing the sector.

“We have been turning a pretty big corner over the last four years, and fortunately we’ve had a pretty solid work book to see us through that time.

“But things are still slow, things are taking longer to get off the ground, there are things out there, but they are just taking time to get going.

“We would love there to be more opportunities and things to get going a bit quicker, but at the same time we’re confident about the future and with our business going forward.

“It’s been a big corner to turn, everyone would acknowledge that, and hopefully from next year we will start to see things starting to pick up again.”

Multiplex WA regional managing director Chris Palandri was also optimistic about a potential recovery to more normal market conditions in 2020 and beyond.

Mr Palandri said the downturn had been exacerbated by the fact WA’s construction market’s peak included big-ticket items such as hospitals, stadiums, hotels and shopping centres that kept contractors busy for extended periods.

“It was a massive workload over a period of time and now we are just probably going into a trough and back to a more normalised Perth market.

“That’s really where we are at the moment, what’s happening is that project size is getting smaller, but competition is getting bigger.”

Mr Palandri said Multiplex’s pipeline of works, which includes Chevron’s headquarters to be built at Elizabeth Quay, the $500 million expansion of Karrinyup Shopping Centre and a $200 million data centre for NextDC in East Perth, was indicative of increasing investment confidence.

“The Chevron project is a nice sign in the market about the big end of town being Brookfield Properties and Chevron, being one of the bigger investors in the oil and gas industry in Western Australia, having the confidence to go and take a long-term lease and get things up and running,” he said.

“A lot of the projects coming up, including the Chevron project, are consortium bids.

“We had to put in a really competitive price to Brookfield so they could provide a competitive rent to Chevron so that we could knock out the other competitors in the market.

“The market is improving, it’s certainly not going to get worse.

“Although the state government doesn’t seem to have much capacity or inclination to spend a lot of money moving forward, that will happen down the track as the finances are fixed up.”

In that regard, Master Builders Association WA executive director John Gelavis urged the state government to take a proactive stance to help revive the construction sector.

“As the market has come off and the big projects have come to an end, workers and contractors in that sector have struggled,” Mr Gelavis said.

“When the market comes off like it has, builders and subcontractors, everyone is under pressure.

He said the contribution the construction sector made to the state’s economy in terms of apprentice training and job creation could not be understated and needed stimulus.

“I’m not talking about roads and rail such as Metronet – while that’s good for our civil members, the bigger infrastructure projects and the bigger projects need to be attracted into WA.

“We need some new major projects, big construction projects to keep the industry going and keep capacity in the sector.

“The state coffers are probably not as bad as what may be made out to be at the moment.

“I say that with respect to the treasurer, but they are so focused on net debt and I think they are keeping their cards close to the chest.

“The iron ore price is pretty solid at the moment, and with the GST returns now, the government has to seek out a couple of major construction projects to keep capacity in the industry.”

Probuild’s Mr Delmenico agreed the sector would benefit greatly from an uptick in government-funded works.

“It would certainly help to have some major projects,” he said.

“One good sign is that some of the institutions have been looking back at Perth as a real option.

“As things start to slow down on the east coast, hopefully, that is good for us here in the west.

“The state government’s need for a new headquarters for WA Police looks like it could be a great opportunity in the next year, and that’s going to be hotly contested no doubt, so there are some positive signs, but it would be nice if there was more there.”