The award-winning Royal Perth Yacht Club has made the most of its attributes. Jashuan Dias reports. 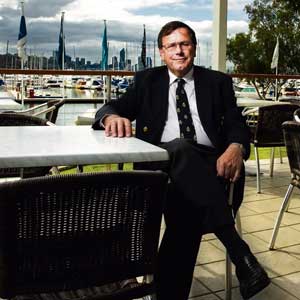 THE Royal Perth Yacht Club in Crawley says "our mantra is to be the club of choice" and it seems to have delivered on that, judging by the outcome at the 2009 Clubs WA Awards for Excellence.

The award for club of the year recognises a club that has excelled in the club industry through consistent, strong performance and leadership.

Being established for more than a century, the Royal Perth Yacht Club has had to constantly reinvent itself.

General Manager Stuart Walton says the answer to what makes the club special is fairly simple.

"We are a prestige club and constantly strive to provide the best quality of service to our members and by doing that the industry has recognised us and bestowed this wonderful award upon us," he said.

The club now operates in Crawley as well as Fremantle.

With 2,000 members and more than 500 vessels between the two sites, the club operates a comprehensive food and beverage service, including bars, restaurants and function facilities.

Mr Walton said the principles of running a food and beverage operation in a club are similar to those of a restaurant or a hotel. The main difference lies with the expectations of club members.

"Clubs, through their membership, tend to get regular clients or members using their facility. As a result clients tend to become more demanding and critical and require a higher level of consistency of service. That's something we strive to achieve," Mr Walton said.

"In providing a high quality of service, the rest of the business tends to look after itself."

For Mr Walton personally, the satisfaction comes from running a prestige operation with a quality group of staff.

As a long-established, prestige club, in a prime location in Perth's western suburbs, the club is almost assured of having a full member list.

"One of our other key advantages is the magnificent view of the city from the club and the bonus attraction with regular visits from dolphins only 50 yards away," Mr Walton said.

So far, Mr Walton's biggest achievement is overseeing the $8 million reconstruction program of the marina at Crawley.

Improving the quality of service not only concentrates on the food and beverage sectors, but also on the sailing and yacht racing facilities.

"One of our goals is to continue to improve sail training faculty by recruiting a well known international coach and introducing more structured training programs, with a view to producing more world class sailors,'' Mr Walton told Gusto.