Concern as China expands its horizons

China’s actions in the South China Sea have raised regional tensions, and should be closely watched. 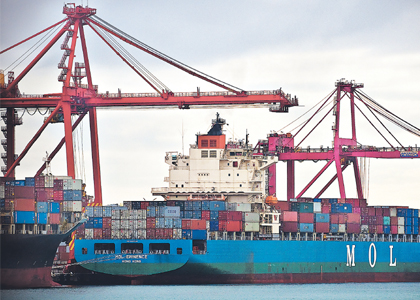 CONSEQUENCES: Any future blockade of shipping through the South China Sea would have ramifications for exports from WA. Photo: Grant Currall

China’s actions in the South China Sea have raised regional tensions, and should be closely watched.

OMINOUS things are happening across the South China Sea, a strategically and economically important waterway at the heart of the Association of South-East Asian Nations.

Roughly the size of Western Australia, only at its north-western extremity do its waters lap a segment of southern China, whereas Vietnam extends along its entire western perimeter; the Philippines straddles all of its eastern flank, and Malaysia’s states of Sarawak and Sabah, plus Brunei, form its southern boundary.

Yet distant China has claimed it all.

China’s huge, unnoticed claim was made in 1947 by Nationalist Chinese officials, who simply ignored that they were commandeering waters just over the horizons of Vietnam, the Philippines, Sarawak, Brunei and that’s the crux of today’s problem; far more distant China claims the entire South China Sea as Beijing’s, no-one else’s, whereas each of the four littoral states say segments of this vast expanse of water fall under their jurisdiction.

Who’ll prevail? At what cost to all?

Another complication is that Taiwan, well north of the sea, backs Beijing, since Taiwan’s officialdom claimed it in its entirety when they controlled mainland China - a move promptly endorsed by the Communists, whose armies in 1949 ousted the Nationalists who fled to offshore Taiwan.

Two distant Chinas, who have remained bitter rivals ever since, thus

say the South China Sea belongs to the Chinese, while four littoral states say segments belong to them.

How will these overlapping claims be reconciled without sparking conflict?

Another factor is that towards the South China Sea’s southern sector is an archipelago of 750 or so reefs, islets, atolls, cays and islands called the Spratlys.

China’s claim will mean strife, since citizens not only of China, but Malaysia, the Philippines, Brunei and Vietnam inhabit many of these features.

And then there’s the Paracel archipelago at the South China Sea’s northern extremity.

Both archipelagos host fishing activities, while the Spratlys have oil and natural gas reserves.

Beijing is now moving to finalise its enormous 1947 claim over this huge expanse of South-East Asian waters.

Last year, Beijing stationed a military garrison on the Paracel island of Yongxing, 350 kilometres south of China’s most southerly island of Hainan.

That move included building a compact city, Sansha, something that’s upset Vietnam and the Philippines, who see it as intimidation.

Yongxing already has a 2.5km runway, so can accommodate Chinese fighters, long-range bombers, plus surveillance aircraft.

Indian naval commander, Sarabjeet Singh Parmar, says the Yongxing move significantly tips the balance in the disputed South China Sea basin in China’s favour since Beijing can now extend what strategists call ‘combat radius arc’ to include airspace over virtually all the Philippines and Vietnam, plus Brunei, Malaysia, Cambodia and Thailand.

In other words, it will be capable of controlling airspace over the entire South China Sea, including its littoral states.

“This island could well become China’s Diego Garcia in the South China Sea; there are some similarities between Yongxing Island and Diego Garcia that merit attention,” Parmar said.

Diego Garcia, an American maritime base 1,600km south of India and Sri Lanka, and roughly midway between WA and Africa, hosts a US naval and air power facilities.

“Even though Yongxing’s runway juts out into the sea, there is the possibility that it could be extended by reclamation,” Parmar said.

“The naval base at Yongxing has, over the years, been upgraded, with construction of a jetty of around 500 metres and an anti-wave dyke to protect ships berthed there.” Noteworthy also is that China now has an aircraft carrier, the Liaoning, that could intimidate Taiwan or any ASEAN state, ‘gunboat diplomacy’ style.

But according to one report, China is instead setting out to begin enforcing new rules over the South China Sea, not with naval patrols but coast guard vessels from its expanding marine surveillance unit.

That’s seen as less threatening but suggests China view the South China Sea as its territory.

“As of January 1, China will officially include the coasts of many uninhabited islets, rocks, and reefs in the South China Sea in that jurisdiction,” the report said.

“This will make a lot of areas that the rest of the world considers ‘international waters’ into Chinese coastal waters.”

One of many perplexing questions is whether China’s beefed-up coast guard will ever be used to expel ASEAN nationals who have lived, for years, on those islands in the South China Sea.

Such expulsions could spark a major stand-off between China and Australia’s nearby ASEAN neighbours.

Where would Australia stand on such actions during what Canberra so fondly calls The Asian Century?

Although Washington has reacted cautiously to the boosting of China’s presence on Yongxing, it is clearly wary of the move.

“We are concerned by the increase in tensions in the South China Sea and are monitoring the situation closely,” State Department spokesman Patrick Ventrell said.

“In particular, China’s upgrading of the administrative level of Sansha city and establishment of a new military garrison there covering disputed areas of the South China Sea run counter to collaborative diplomatic efforts to resolve differences and risk further escalating tensions in the region.”

Vietnam and the Philippines have accused China of stepping up harassment at sea.

“The US urges all parties to take steps to lower tensions,” Ventrell said.

Washington has fallen in behind the ASEAN by boosting military links with the Philippines and Vietnam and is stationing marine training units in Darwin.

And Congress has passed a bipartisan-backed resolution committing the US “to assist the nations of Southeast Asia to remain strong and independent”.

China’s Yongxing move comes as it’s become involved in a dispute with Japan over the East China Sea’s Senkaku islands, which Beijing calls the Diaoyus.

During a recent press conference, US Defence Secretary Leon Panetta said he hoped a code of conduct could be negotiated over the South China Sea.

“The last thing we want is to have direct confrontation in the South China Sea with regards to jurisdictional issues,” Panetta said.

The last time the South China Sea was blocked to Australian shipping was from December 1941 until mid-1945 - when Japan’s Imperial Navy dominated the Western Pacific.

China could eventually insist on formal requests for permission to a right of passage through the South China Sea and move to charging transiting fees, like Egypt and Panama with the Suez and Panama canals respectively.

Beijing’s dominance of the South China Sea also means it would be an enormously powerful and intrusive overseer at the very heart of ASEAN; perhaps even well beyond.