A balancing act between the science of plant breeding and consumer preferences has produced a new apple variety, developed in Manjimup, in WA’s South West. 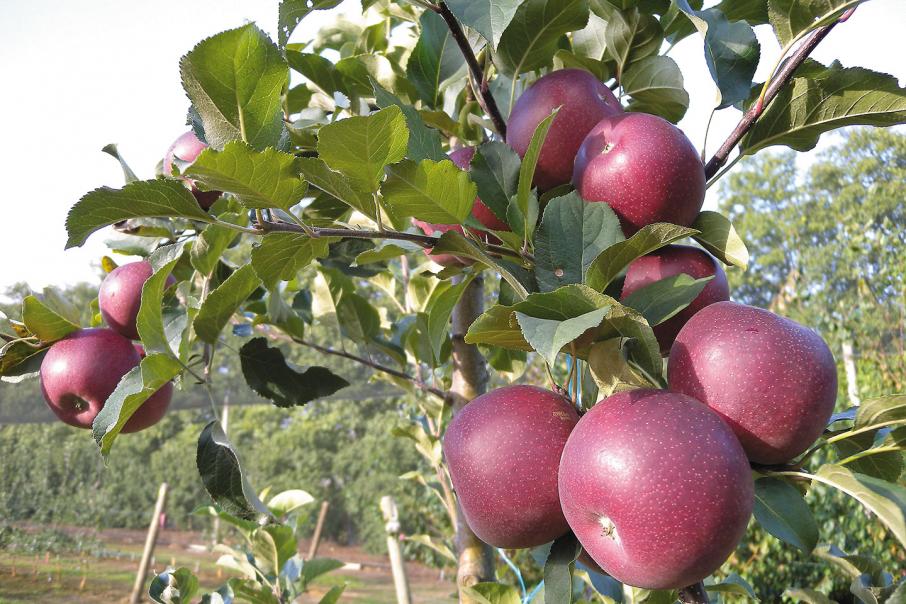 BRAVO: The new variety can be found in specialty grocery stores.

A balancing act between the science of plant breeding and consumer preferences has produced a new apple variety, developed in Manjimup, in WA’s South West.

A NEW apple variety developed on the back of Western Australia’s rich plant breeding history has hit grocery store shelves, offering a product the industry believes will appeal to the number one attribute that market research suggests an apple should have – looks.

The burgundy and spotted Bravo apple comes from the same lineage as another hugely popular variety bred in WA, the Pink Lady, and is the result of more than 20 years of development.

Fruit West Co-operative executive officer Nardia Stacy said the industry and growers were optimistic for the new apple, which met many core consumer requirements beyond appearance, including great taste and crunchiness.

Ms Stacy also noted that Bravo took longer to oxidise, making it a more suitable visual addition to a wine and cheese board.

Bravo was bred in Manjimup in the South West as part of the Australian National Breeding Program run by the Department of Agriculture and Food. It is a cross between the Royal Gala and Cripps Red variety (sold as Sundowner), the latter developed by John Cripps, the breeder of the Cripps Pink variety that has been marketed as the Pink Lady.

Both Cripps varieties share the same parentage – the Golden Delicious and the Lady Williams. The latter was widely grown in Australia, having been discovered as a chance seedling in the 1930s.

After the first commercial year of production, with 25 growers who are mainly in WA, the high-end Bravo has started to enter speciality grocery stores.

A limited search by Business News found it at Cottesloe retailer The Boatshed, selling at $9.99 per kilogram.

DAFWA horticulture industry development director David Windsor said the 20-year development process reflected the time it took to hone a variety that would stand out in a crowded market.

“Since the first cross seedling was planted the breeding programs produced another thousand brothers and sisters who didn’t make it,” Dr Windsor told Business News.

Based on consumer research, he said the first stage focused on selecting the one-in-400 variety that was the most aesthetically interesting.

Throughout the process, taste testing was conducted in Manjimup and then extended to a panel of professionally trained tasters, before being presented to shoppers in supermarkets. During the second stage, apples also underwent extensive evaluations on other variables such as flesh texture and storage capabilities.

Dr Windsor said it was a balancing act between the science of plant breeding and the research behind consumer preferences.

“What we look for first is something distinctive to catch the eye of the shopper and if the apple looks like any other already available,” he said.

Michael Considine, from the School of Plant Biology at the University of Western Australia, said market research found consumers placed the most importance on the colour of the apple, with price ranking number two, skin at number three and taste as the fourth factor.

Dr Considine said apples were a huge source of antioxidants, a health-based property that ranked number five in consumer motivations at the point of purchase.

Although as Dr Windsor noted, antioxidants were not something the program focused on during the early breeding process, Dr Considine is hopeful that variables affecting health benefits will start to become more of a focus in varietal development.