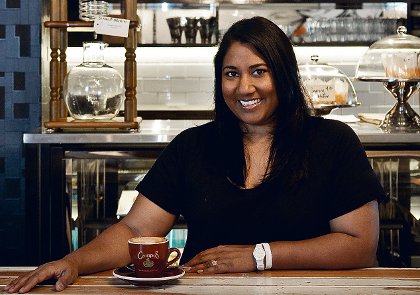 TELEVISION producer Laki Baker and Olympic swimmer Eamon Sullivan bonded over a mutual love of all things food and coffee on the set of Celebrity Masterchef in Sydney in 2009.

Born and bred in Perth, the pair would frequent Sydney cafes together and wonder why Perth didn’t have the same kind of offering when it came to espresso bars.

Ms Baker and Mr Sullivan both came back to Perth after filming for Celebrity Masterchef wound up and decided to set up their own cafe together, using Mr Sullivan’s own recipes.

Ms Baker told Gusto she and Mr Sullivan had planned on waiting until the 2012 London Olympics was over before they embarked on their business venture.

“We had plans to do it after the London Olympics so Eamon would be here, but we happened upon this location … and I thought it was too perfect an opportunity to turn down,” Ms Baker says.

With Mr Sullivan involved in a heavy training schedule overseas, Ms Baker had to learn how to run a business on her own.

She formed a network with other small business owners, enrolled in small business courses and found herself a mentor within the industry, New Norcia Bakery director Kingsley Sullivan.

“From the moment I landed in Perth I have been immersing myself in what it takes to own a small business, because neither of us have any background in running a business,” Ms Baker says.

“I just surrounded myself with as many business people in the industry as I could.”

Wanting to ensure the coffee was the star attraction at Louis Baxters, the owners designed a small menu to complement the coffee.

“While the food is ancillary to the coffee it is a very high-quality food made with local, organic and free-range ingredients, so it’s a small menu with big punch,” she says.

Concerned by the high price of food and coffee in Perth compared to the east coast, the pair implemented several techniques to ensure they could remain competitive on price.

“We figured that by having good prices people would want to come here; we keep the costs down by having a small menu and very little wastage,” Ms Baker says.

“And the chef is very clever with specials; if she’s got mangos one week she will use them in a variety of dishes … it’s about using what you have effectively and not over-ordering.”

“A week before we opened it didn’t work out with the chef we hired, so we decided it would be better to open without a chef, so Eamon and his parents were doing the cooking for the first couple of days,” she says.

“We found it extremely hard to find a chef because they all want the money that gets offered on the mines and they can earn triple what any place in Perth can pay them.”

While all of the business decisions are made together, the hours involved in running Louis Baxters on a day-to-day basis has proven challenging for Ms Baker, who works 13-hour days, six days a week.

“(That said) I really wish Eamon was here for it because at the same time it’s exciting and its fun.

“Eamon is like a brother to me and not sharing this part of the adventure with him is really hard sometimes.”