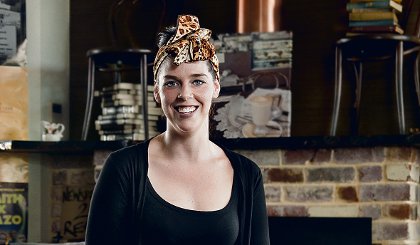 BRIDGING THE MOVE: While Renata Taylor's Bicton cafe may have a retro look to it, 21st century technology like social media has played a big role in the venue's marketing strategy. Photo: Grant Currall

RENATA Taylor’s childhood memories of her grandmother making coffee on an old stovetop played a formative role in her decision in 2008 to open Little Stove with her husband, Greg.

Located on a tree-lined street in the heart of Bicton, the cafe will remind many of a trip to their grandma’s house, fitted out as it is with 1960s television sets, antique bookstands and floral tea pots.

Having worked in various hospitality roles for more than a decade, the husband-and-wife team felt the timing was right to open their own business.

“Coming from a Croatian family, I felt like it was in my genes to open a coffee shop,” Ms Taylor says.

“I have vivid memories of my nanna swearing at this little stove she used to cook on, yet she would make some of the most amazing creations using just simple produce.”

A native of Fremantle, Ms Taylor knew she wanted to pick a suburban location for her cafe concept.

“I thought it would be nice to make something where you could reach people and it’s so lovely to make contact with the customers and be on friendly terms with them,” she says.

Described by Ms Taylor as ‘granny chic’, Little Stove’s décor has been sourced from antique shops, markets and even roadside collections.

To maintain a close connection with the local community, she has even hand-delivered coffee to the neighbours.

“We’re in the suburbs and I don’t think a modern-style of shop would have worked; I really think people like to be nurtured and comforted and that’s what it is like here,” Ms Taylor says.

“We have great clientele that ranges from kids who come in to buy lollies after school, retirees, local residents and lots and lots of people from outside the area.”

Originally employing just a couple of wait staff when the cafe opened, Ms Taylor now has a team of more than 20.

However, securing good staff, in particular wait staff and baristas, proved to be a significant challenge.

“I think the hardest thing is to find someone with a positive attitude who just doesn’t stop,” Ms Taylor says.

“It’s really hard to find younger staff because they tend to be of the generation of ‘I’d rather my parents give me pocket money than work’; we do have a couple of exceptions to that rule, but they were very hard to find.”

Instead of employing baristas, Ms Taylor decided to train 10 of her staff in the art of making a good coffee.

“Baristas want about $30 an hour in Perth, so we take our waitresses and train them up as baristas,” she says.

“That way if they leave us they go back out there with a valuable skill and we are hopefully doing our bit to build the industry.”

Initially relying on word of mouth, Little Stove has taken advantage of social media to further build its customer base.

“When we opened we had a passive marketing campaign and we just told people to tell lots of people because we didn’t have a big budget,” Ms Taylor says.

“Marketing doesn’t have to be expensive … social media is such a great way to reach people and even those in the older demographic are getting on Facebook because they want to follow what their kids are doing.”

Ms Taylor and her husband, who runs the kitchen and makes everything from scratch, emphasise the importance of sourcing fresh, local ingredients.

“We use our local greengrocer, our local butcher and we always buy WA free-range eggs,” Ms Taylor says.

“You have to support people in small business, look out for each other and create a network because Perth really is a small place.”