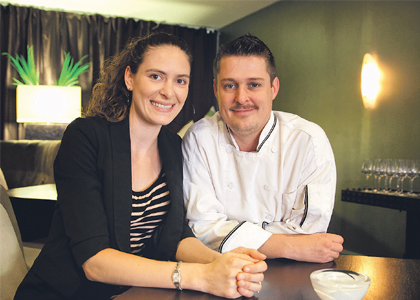 FRESH: Kelli and Kiren Mainwaring say they want their menu to have an element of surprise for diners. Photos: Annaliese Frank

When Kiren and Kelli Mainwaring met more than 15 years ago, owning their own restaurant was a “crazy dream” they had as they backpacked their way around Europe. The couple opened then first venture, Dear Friends, five years ago and the Caversham restaurant has since won multiple awards and attracted rave reviews.

Co-op Dining is the latest chapter of the dream, an intimate space in East Perth that was established with the couple’s strong philosophy about bringing food directly from paddock to plate.

From Tuesday to Saturday, the restaurant offers a five or 10-course degustation for diners, serving produce foraged or gathered by Mr Mainwaring from smallholder fanners and bushland in the Perth Hills.

The couple first met in Pembrokeshire, Wales, where Mr Mainwaring was training as a chef, and Mrs Mainwaring, a Canadian by birth, was working as an au pair. It was here their philosophy and approach to food started to take shape.

“There’s a strong emphasis on things coming out of the ground or straight from the farm that have been hand-picked by me,” Mr Mainwaring says.

“We cook using a mix of techniques - from some that are a few years old, to things like making sourdough from grapes, which is an ancient Roman technique.

“And we put that into a degustation so that it’s all laid out in a nutritionally balanced away.”

The couple told Gusto one of the keys to running both businesses was the strong network of support they had from good friends and fellow restaurateurs, Restaurant Amuse’s Fladleigh and Carolynne Troy and Red Cabbage owners Scott and Hazel O’Sullivan.

The three couples opened their first restaurants within months of each other and recently celebrated their businesses’ five-year anniversaries.

“It really helps and I think you need that support for business,” Mr Mainwaring says.

“For the first couple of years we were bouncing everything off each other and it was really nice, you didn’t feel like you were starting a small business on your own, you had the help and support of other people that were going through the same thing.”

“The locals have received us really well, and it’s quite different for us, because at Dear Friends you don’t have walk-by trade at all,” she says.

The couple say the good reception is important because they rely almost exclusively on word of mouth for their marketing.

“We don’t have any investors, and we’ve never had an advertising budget, we just focus on our work, and stick to quality and let the word travel,” Mrs Mainwaring says.

She says that while the degustation-style of dining won’t appeal to all, Western Australians are increasingly knowledgeable about their food and willing to try new things.

The menu includes items like rainbow trout served on a salt bock, suckling pig with wattle seed and eucalyptus and wild lupin tofu.

While relying on foraging and gathering to source all of their ingredients may seem risky, the menu is designed to change constantly and evolve around what is available at the time.

“It’s a challenge when you’re getting all your produce from the farm and you’re counting on something coming up and then a frost suddenly wipes it all out,” Mr Mainwaring says.

“That’s why we keep everything open and let people know our menu will change.”

Their approach to “responsible dining” is similarly flexible and designed to ensure customers always walk away with a first-class dining experience.

“If you’re a couple of staff members down, you don’t take in 50 customers, you cut it down to make sure that everyone’s getting that consistent good service,” Mr Mainwaring says.

Mrs Mainwaring adds: “It can be detrimental sometimes on the money side of things but in the long run we believe it’s going to be more beneficial.”